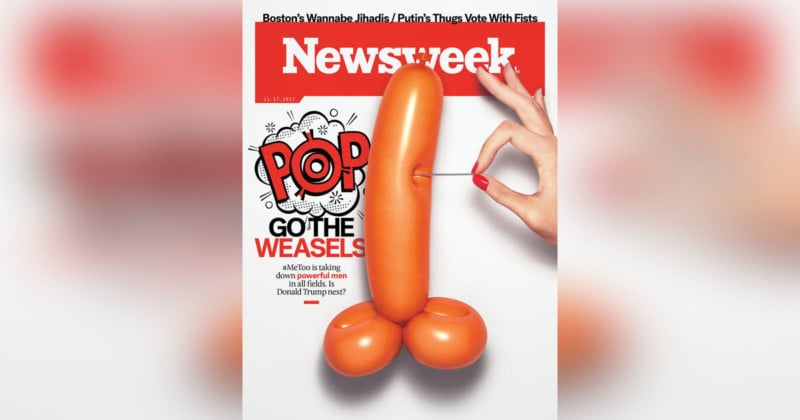 Newsweek is getting widely criticized after sharing a sneak peek of the cover on the November 17th issue of the magazine. To illustrate the lead article about sexual harassment, the magazine decided to use a photo of a feminine hand sticking a needle into a phallic balloon.

The cover was Tweeted by both the magazine and its Global Executive Producer, Alfred Joyner:

“Pop go the weasels. #MeToo is taking down powerful men in all fields. Is Donald Trump next?,” the cover asks.

Reaction to the cover was swift, and the choice of cover photo appears to have received more attention than the story itself. Here’s a sampling of the criticism on Twitter:

Terrible cover in so many ways.
The painted nails, the popping of the inflated penis and the comic book styling.
Bravo. You just turned exposure of sexual assault into satire.
Recall this cover.

If @Newsweek was trying to pay homage to the hundreds of women who have bravely come forward about sexual assault, a balloon penis was NOT how to do it. https://t.co/tIZ26eIE0w #MeToo @Slate

"It perfectly illustrates the juvenile, adolescent male snickerings that have endlessly floated around locker rooms, golf courses and topless bars for years." @JudyWalgren on @Newsweek's travesty of a #sexualharassment cover. https://t.co/JbBTUV3SCd pic.twitter.com/qXXhvz9sy4

Thank you. This is a MAJOR ugh. Why does every attempt at female empowerment and safety-seeking get equated with castrating or otherwise "harming" men? Enough.

The. Worst. Cover. Ever. #tonedeaf

Terrible cover in so many ways.
The painted nails, the popping of the inflated penis and the comic book styling.
Bravo. You just turned exposure of sexual assault into satire.
Recall this cover.

I assumed (and was hoping) this was a @Newsweek parody account. This cover is garbage and a disgrace to the brave women who are standing up to the men who violated them.

Publications have also been putting out opinion pieces denouncing the cover photo choice, calling it “wrong“, “awful“, and “nope.”

“I am of a certain age to remember a time when Newsweek was an award-winning outlet for powerful news photography,” writes former SF Chronicle photo director Judy Walgren at Reading the Pictures. “Over the past decade, we have all been forced to bear witness to the slow and painful decline and demise of print publications in the United States.”