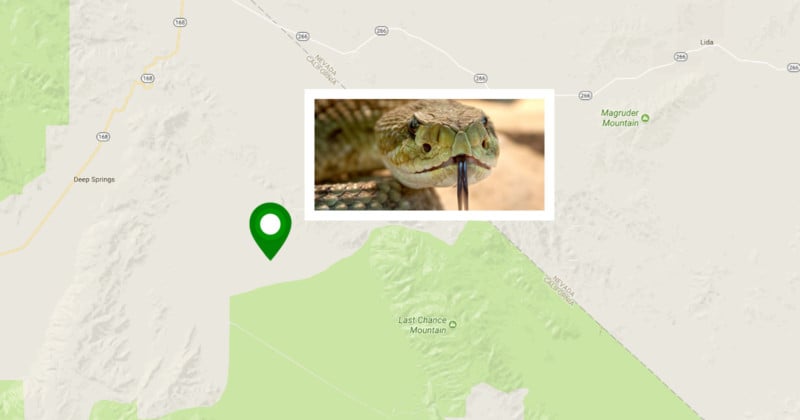 In the modern age of photography, there are more and more cameras that embed GPS data into photos, something casual users may not even be aware of — this is particularly true of smartphone cameras. And here’s something you should be aware of: unwittingly sharing GPS data in photos of sensitive wildlife can directly lead to its death at the hands of poachers.

Motherboard recently published a report on how the survival of many protected and endangered species relies on their locations remaining a secret. Poachers and collectors are known to browse social media and online sources for images taken by innocent picture-takers.

By downloading the photo from the Internet, it’s possible for malicious individuals to extract GPS coordinates of where the photo was taken. Then it is only a matter of following directions to the precise location.

Researcher Neil Balchan recently faced a horrendous scene of 50 garter snakes with “bashed in heads” that someone had found in a remote, isolated location.

“Collectors certainly use Instagram, forums, and other online resources to find new populations to pillage,” Melissa Amarello, co-founder of Advocates for Snake Preservation, tells Motherboard. “There’s a real risk of harm to individuals and populations.”

We reported back in 2014 that some wildlife reserves and parks have begun instructing visitors to scrub geotag data:

This is a quintessentially 21st century photo pic.twitter.com/rXvB12xMm6

Scientists and amateur herpetologists are becoming increasingly wary of this problem. Excluding GPS data is one thing, but not including landmarks in photos is also an important step you can take to protect sensitive wildlife.

So, next time you are uploading and sharing a wildlife snap of an animal that may be at risk, consider include as little location data as possible in the frame and in the metadata.