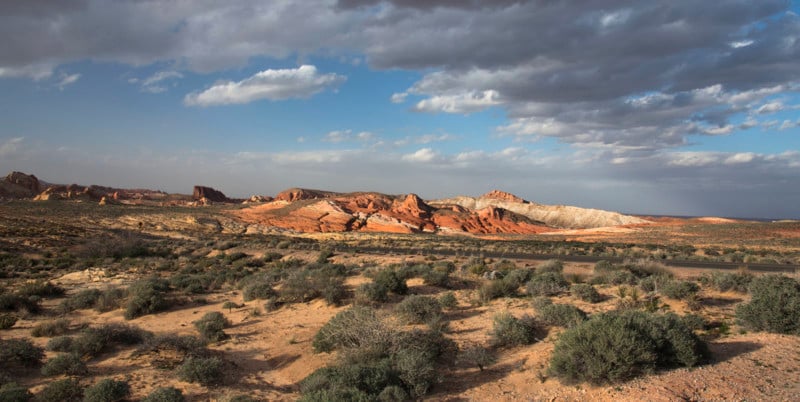 Nevada Law and the Nevada Administrative code have a simple definition of when you need to have a permit to shoot photos in their parks. It is based entirely on whether or not the pictures will be sold.

Nonetheless, the policy of the Parks division is that anyone shooting pictures of a model is assumed to be doing “commercial photography” even when they have evidence to the contrary. After a lengthy discussion with both a park and the Deputy Administrator of the Parks Division, they have confirmed this interpretation. And it’s worse than just getting a permit; there is a burdensome procedure you have to go through before the shoot, even if it’s just two people, and as a permittee, you are highly restricted in where you can shoot.

Let’s do a little thought experiment. Suppose there are two fellows, Bradley and Randy, who are in a State Park in Nevada.

Bradley is an internationally-known commercial photographer. He has been engaged by a top ten advertising company to produce photos for use by a foreign luxury car maker. Their idea is to take pictures of iconic American landscapes and Photoshop in their autos to make their product feel more “American.” Bradley is being paid a retainer of $50,000 to take the pictures, plus will get an additional $20,000 each for every one they use in their ads. He and his camera wander around all over the various State Parks in Nevada for two months, shooting away.

Randy made a bunch of money in the tech industry. He has used it to buy a Nikon D810 and a really big lens. He also has used that money to attract a high maintenance girlfriend, Suzy. Suzy is “a model” — she will tell anyone who listens because she graduated from Barbizon and got a job once handing out flyers at a local liquor store. In fact, since she got paid for that, she proudly tells that same anyone that she is a “professional model.” While driving around in the park, Randy has Suzy get out of the Maybach once in a while and takes her picture. He loves the power he feels from directing her, and she loves to have her picture taken. When they get home you just know that Suzy will proudly plaster those pictures all over her Facebook, Instagram and Twitter accounts. Because, well, that’s what “professional models” do.

Do either of them need a permit for “commercial photography” in the Parks? Well, let’s see if we can figure it out…

The law and regulations tell us:

‘Commercial photography’ means photography engaged in for financial gain, including, without limitation, the sale of a photographic image as a product or for use in advertising, motion pictures, portraits, television productions or portfolios and the archiving of an image by a person who uses photographic skills, equipment or resources to provide a photographic product for sale. [Source: NAC 407.0071, emphasis added.]

Well, Bradley is the big-time commercial photographer who is shooting pictures to sell for advertising and getting big bucks for it, so he needs a permit. Right?

Not so fast. The Nevada Park system has a set of rules, one of which states:

The division will not charge individual photographers that are taking pictures privately or commercially, if they are alone without props or models. Commercial photography engaged in by one person does not require a permit or any additional fees.

So Bradley is off the hook. He can keep all that hard earned money and shoot freely without restriction. But what about Randy?

Randy has a problem. His girlfriend is “a model.” Worse, she thinks she is a “professional model” and so does the Park system. Neither one of them knows what “professional model” means, but never mind that. Randy is there with Suzy, so he needs a “commercial photography” permit. That his pictures are only destined for social media, not for sale or for advertising, means nothing. That he has no chance of ever being a professional photographer doesn’t matter. That he has never made a dime from selling pictures and never will don’t matter. That what he is doing does not meet the definition in the law for “commercial photography” doesn’t matter. He is there with Suzy, taking pictures of Suzy, and so he needs a permit.

For Randy to take pictures of Suzy, all he has to do is get $300,000 in liability insurance policy, make sure the Park is a “named insured”, file an application with a $50 fee, do a survey of the Park without Suzy in the car, and then make an appointment with a park ranger, get the places he wants to take pictures of her approved, and he is all set to tour the park with Suzy the next day.

Now, he still can’t take pictures of her in places he hasn’t had approved. If they drive by a group of tourists at an especially appealing location that Randy missed during his survey, and all those tourists are taking selfies and pictures of each other, Randy can’t stop the car and take a picture of Suzy no matter how much she whines.

And if he happens to be in the Park after 5:00 PM, which is very likely because Suzy really is not a morning person, he can’t take pictures of her either, because that’s what the rules say if you have a permit. Never mind that all the other tourists can happily snap away until sundown — Randy can’t.

All the above is taken from the statute, the Nevada Administrative Code (NAC) and the Rules that the Park system publishes to describe how it administers the law and the Code. It might, at this point, be worthwhile to point out that the regulations in the Code, and the Rules which implement them, are under the authority of the Administrator, whose charter to issue those regulations and rules is also contained in the statute. In this case, the relevant statute says:

Any regulations relating to the conduct of persons within the park or recreational facilities must:

It appears that, in the wisdom of the Nevada Park System, all the things Randy has to do, in bold above, are for the purpose of helping him find inspiration and enjoyment in taking his pictures of Suzy. Or perhaps, imposing those requirements on Randy, but not on any of the other thousands of tourists who use the park, take pictures of each other in the park, but don’t happen to have a girlfriend who is “a model” somehow protects all those other tourists.

Author’s note: A copy of this article has been sent to the management of the Nevada Parks division to confirm accuracy, but they have made no response.

About the author: Roger Talley is a former professional fashion photographer who has been retired for over a decade now. The opinions expressed in this article are solely those of the author. Talley has authored a book on modeling: The Professional’s Guide to Modeling. You can find more of his work on his website and portfolio.

How to Do Splashes in Product Photos Using Speedlights