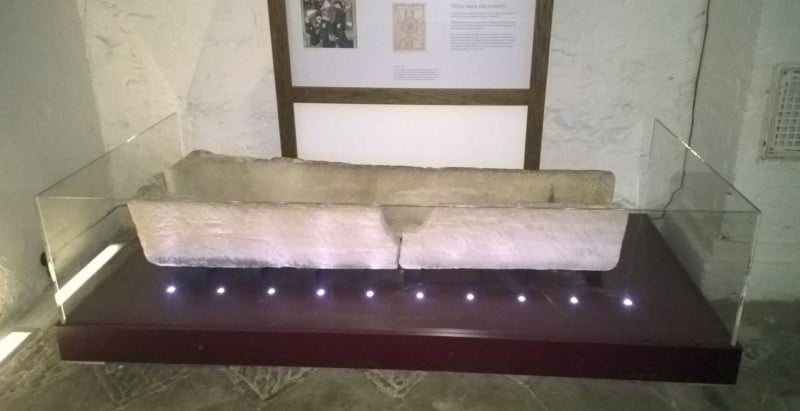 An 800-year-old stone coffin in a UK museum was damaged earlier this month when parents decided to lift their child into it to pose for a photo.

The Guardian reports that the ancient artifact was on display at the Prittlewell Priory Museum in Southend, Essex, on August 4th when the kid was lifted past the protective barrier and placed into the coffin. The coffin then fell off its stand, breaking a chunk out of it.

Security camera footage shows that the family quickly left the area without reporting the damage to museum staff, who discovered it and then found out what happened through recorded CCTV video.

The sandstone casket was an extremely rare piece that was discovered back in 1921 at the priory, which was founded in the 13th century. While damage to such an artifact cannot be fully fixed, it’s estimated that the necessary repairs will only cost less than £100.

“The care of our collections is of paramount importance to us and this isolated incident has been upsetting for the museums service, whose staff strive to protect Southend’s heritage within our historic sites,” museum conservator Claire Reed tells the Press Association. ““You can put all the risk assessments in place but you really don’t expect people to try to get into the artefacts.”

Due to the actions of the careless family, future museum-goers won’t have as nice of a view of the coffin: the museum is planning to fully enclose the coffin now to prevent any future damage.

How to Shoot a Dancer Coming Out of a Wall Mirror

CrashPlan is Ditching Consumers: Time to Move Your Photo Backups