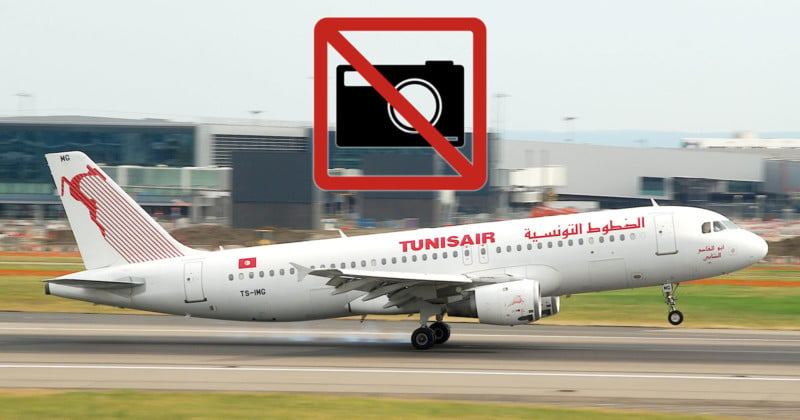 On Saturday July 1st, 2017, £600 worth of cameras and equipment were stolen from inside my rucksack, itself packed into a larger suitcase, during a Tunisair flight from Tunis to London Heathrow while they were checked into the hold of the plane.

Like any discerning photographer, or indeed sensible human being, the idea of checking my cameras in rather than keeping them with me in hand luggage was unthinkable, but as it turns out, I didn’t have a choice.

What I wasn’t aware of until moments before check in was that as of March 21st, 2017, new restrictions on electrical items being brought into the UK from the following Arab Countries were put in place: Turkey, Lebanon, Jordan, Egypt, Tunisia, and Saudi Arabia.

These restrictions are not enforced on outgoing flights, only those flying into the UK. In response to the FAQ question “Why are these measures not in place for flights traveling from the UK?”, gov.co.uk states that:

This applies to inbound flights. The UK has some of the most robust aviation security measures in the world but we keep this under constant review based on assessment of risk.

This is a frustratingly non-committal answer, and does nothing to dispel the suspicion that the UK’s supposedly more stringent security measures are purely superficial. The inconsistent implementation of this restriction surely renders it ineffective. My sense is that the measure exists solely to reassure UK travelers.

What is all the more frustrating is that the inconsistency in the implementation of this restriction is obvious in the apparent lack of corroboration between the Tunisian airport authorities and the UK government itself. While on gov.co.uk the official line regarding cameras is: 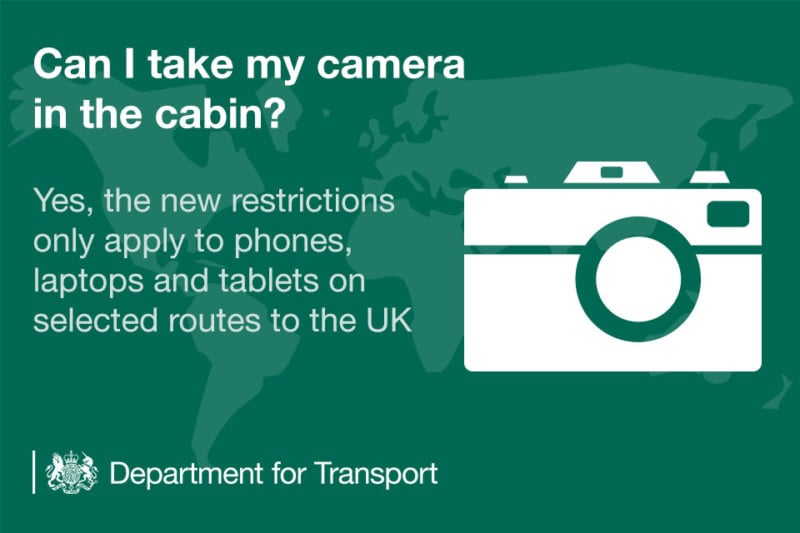 Tunisair unambiguously includes cameras in its list of electrical items that are banned from hand luggage: 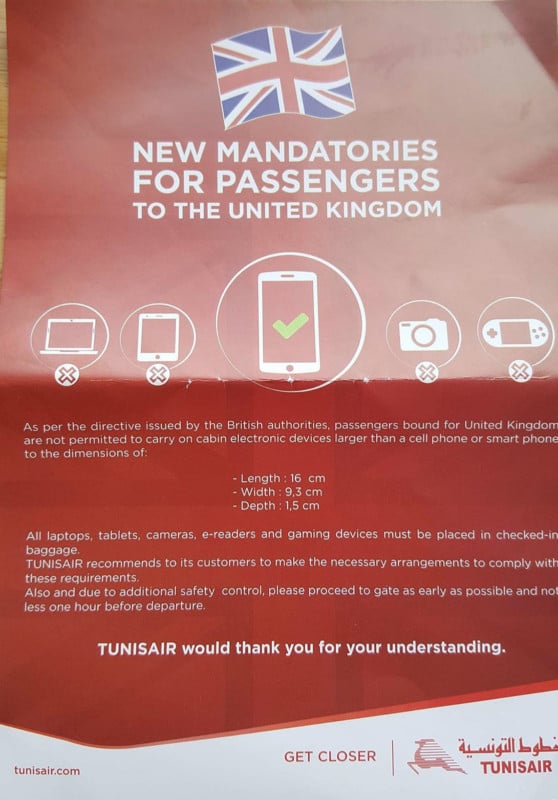 In theory, I don’t have a problem with this measure if it makes people feel more safe, but the way it was implemented was time-consuming, poorly organized, and inconvenient, and led directly to the theft of my most valuable possessions. My cameras are not only my passion but also provide me with an important source of income through my work as a freelance photographer.

Between arriving at Tunis-Carthage airport and boarding the flight, I was subjected to an excessive and exhausting 6 scans and searches, and on arrival in the UK was apprehended in the queue for passport control by a border guard and asked “where are you travelling from?” as he snatched my passport out of my hands to check it. No indication of the measure was given during the booking process, so I did not have a chance to prepare for the scenario of having to check valuables into the hold of the plane.

Had I known in advance, I would have bought a lock to secure my suitcase with. As it was, I had less than a minute to hastily repack my valuables and electrical items, all the while being unclear as to why this was necessary.

It is also worth noting that Tunisair refuses to take any responsibility for “lost goods”. The following passage is taken directly from their website:

“The following articles must always be transported in the cabin baggage and the carrier shall not assume any responsibility for loss or damage: […] Electronic Hardware (laptop, Camcorder, Camera, mobile phone, PDA, computer games etc.) [emphasis mine]”

Not only have I had to pay for the privilege of having my belongings stolen during a flight, but I have also lost a significant amount of time chasing after some form of accountability, or at the very least an apology (none of which I have received).

Editor’s note: Since publishing this post, we’ve softened the language of Rezgui’s original article, which can still be found here.

About the author: Ebyan Rezgui is a photographer based in London, UK. The opinions expressed in this article are solely those of the author. You can find more of his work and writing on his blog and Instagram. This article was also published here.