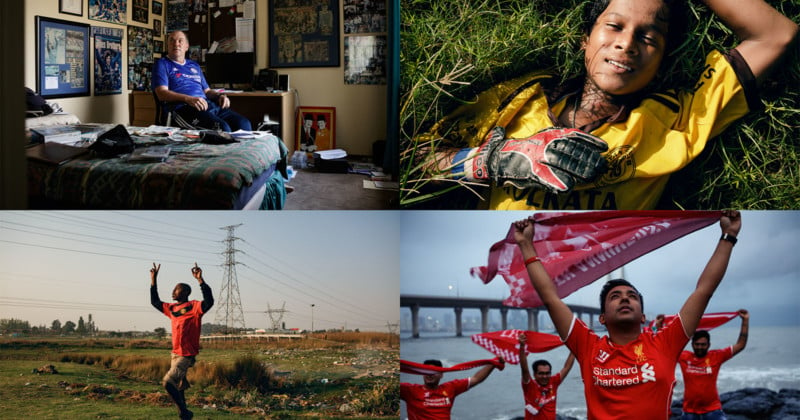 It has been two years since I approached the Premier League with an idea of photographing their fans around the world. I had gone out of the blue to pitch the idea to them, something I had never done before.

As a photographer there is often a separation between commissioned work and personal work, but occasionally the two come together and beautiful things occur. Thankfully the Premier League was interested, and better than that, they brought a whole new element to the project that I didn’t expect and made it far stronger.

That was why I was running down a Soweto street with ten kids and an old football trying to photograph then in the last of the evening light. These kids can go up the road after school to train with some of the best coaches in South Africa. As part of the Premier Skills program run by the British Council, Premier League coaches travel to some of the most impoverished communities in the world and train locals to be football educators. A domino effect begins as these educators spread the best coaching practices throughout their area.

The scheme has reached a staggering 1.2 million kids. It gives them dreams, teaches them the benefits of commitment, and keeps them out of drugs and crime. I knew nothing about this program, which the Premier League runs in partnership with the British Council, but it sounded interesting and I was eager to develop the project to include this.

I love collaboration, particularly when both sides gain from it. Without collaborating with the British Council and the Premier League I would not have been able to tell these stories. Staff based in South Africa and India opened the doors for me, they introduced me to the people they had been working with for years and then gave me free reign to tell their stories as I saw best.

I embraced the challenge with open arms just like I do my personal work. I spent months before my travels chatting to coaches on Skype, talking football with the local fan clubs and finding out about India and South Africa. I slowly developed the best way to make this project.

On the ground this freedom continued, I could photograph the way I wanted to and embrace the situations I found myself in. the resulting exhibition is very different from how I first imagined the project two years ago, but that’s the thing about collaboration — you change your viewpoint and learn new thing when you working with others.

The photographs show the power football has to promote positive change in communities around the world. They tell the stories of the inspiring people I met. It’s been great collaborating in this way and I hope I can do more projects like this in the future.

About the author: Charlie Clift is a photographer based in London, England. He shoots for The Sunday Times Magazine, the BBC, and BAFTA. You can find more of his work and connect with him on his website and Twitter.

Image credits: Photographs by Charlie Clift and used with permission

Interviews with Photographers Annie Leibovitz and Richard Avedon in 1999

How to Create a DIY Car Camera Rig on the Cheap