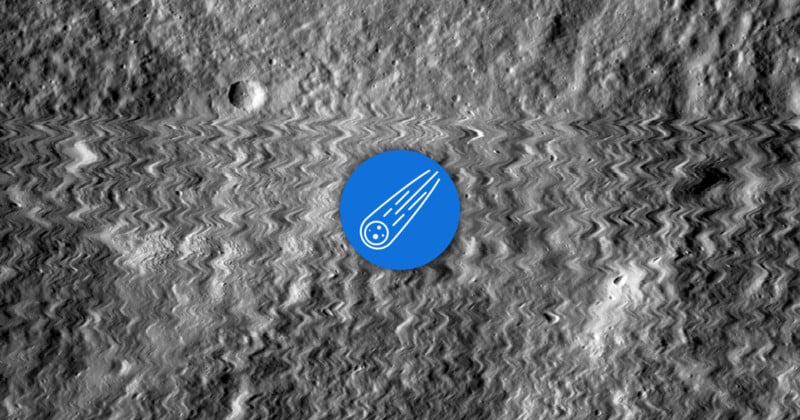 On October 13, 2014, the Lunar Reconnaissance Orbiter Camera (LROC) was hit by a tiny meteoroid which was traveling faster than a speeding bullet. The impact resulted in a ‘wild and jittery’ image of the moon’s surface.

The LROC is a system of three cameras which are mounted on NASA’s robotic moon-orbiting spacecraft. Two of the cameras are narrow angle cameras (NACs), providing extreme closeup images of the lunar surface. The other is a wide-angle camera, which offers a 90-degree field of view in monochrome, and 60-degree in multispectral mode.

According to Mark Robinson, principal investigator of LROC at Arizona State University (ASU) in the US, there must have been a brief violent movement of the left Narrow Angle Camera.

Using detailed computer simulations of an impact on the camera, the LROC team concluded that the left NAC was hit by a meteoroid measuring around 0.8 millimeters, travelling about 4.3 miles (7 kilometers) per second and with a density of an ordinary chondrite meteorite (2.7 grams/cm3).

Thankfully, the Lunar Orbiter did not sustain any significant damage in the impact.

“A meteoroid impact on the LROC NAC reminds us that LRO is constantly exposed to the hazards of space,” says Noah Petro, deputy project scientist from NASA Goddard. “And as we continue to explore the moon, it reminds us of the precious nature of the data being returned.”

Instagram Created a Monster: A No B.S. Guide to What’s Really Going On

Shooting a Handheld Milky Way Photo from an Airplane Seat