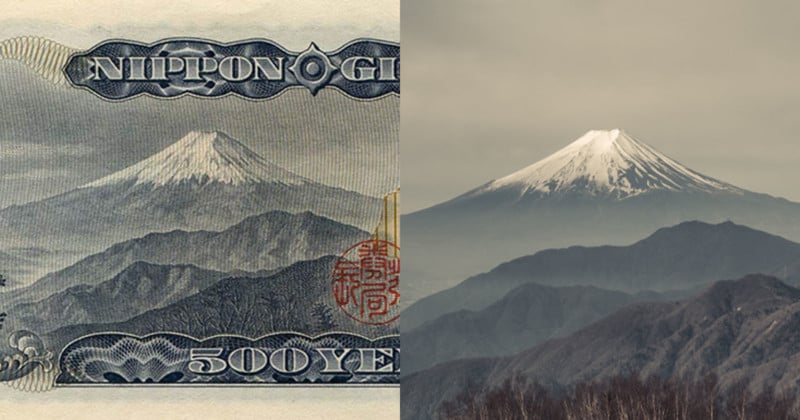 Until the release of the 500-yen coin in 1982, its corresponding paper equivalent reigned for more than 40 years in Japan. In fact, it wasn’t until 1994 that the 500-yen banknote was finally withdrawn from circulation.

One side of the note featured Tomomi Iwakura a Japanese statesman from the early Meiji period who played an important role in Japan’s modernization. The reverse side featured a view of Mt. Fuji taken from the top of Mt. Gangaharasuri in Otsuki City, Yamanashi Prefecture.

It was from this mountain ridge I recently camped out and was fortunate to photograph on a fine spring morning. In appreciation of the picture and its striking engraving I have attempted to meld together the old and new backdrops.

The scenery looks much the same as it did back in the 1950s when the first banknotes rolled off the press and the mountain retains the same reverence that no doubt its forebearers felt when they too pointed their cameras.

About the author: David Lowe is a photographer who explores the Japanese wilderness. You can find more of his work and writing on his website, Twitter, and Facebook. This article was also published here.

Macphun Is Releasing Its Best-Selling Photo Editing Software on Windows