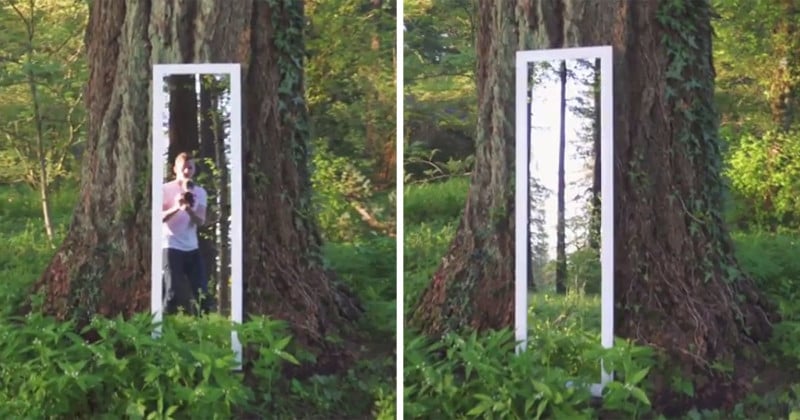 Stop-motion animator Kevin Parry has shared a clever little video illusion titled “Walk in the Woods” that has a lot of people scratching their heads. It’s a loop that shows Parry repeatedly walking into a mirror in a forest and emerging out “the other side.”

Take a close look and see if you can figure out how the illusion was created (using minimal digital trickery):

Walk in the Woods

The video has been viewed over 100,000 times since Parry originally published it a week ago. While Parry wouldn’t divulge the full description/explanation of how he created the illusion, he did share some of the basic details with us.

“The video is comprised of a single take, duplicated, and I had to make sure my start and end points were fairly lined up when shooting,” Parry tells PetaPixel. “There is a bit of digital trickery in that I had to warp the ends of the clips to match, but there’s a hard cut in there (with only a few frames of dissolve). But I didn’t green screen or mask anything.”

“I often have to scale and transform the footage when editing these types of clips together, so I’ll use a wide lens and shoot 4K,” Parry says. “That gives me plenty of room to play.”

“I’ve been wanting to make this illusion for some time, but waited until I could film it in a more exciting location than my house,” he continues. “I made an early morning trip at 5:30am out into the Oregon woods with the mirror and filmed before anyone was on the trail.”