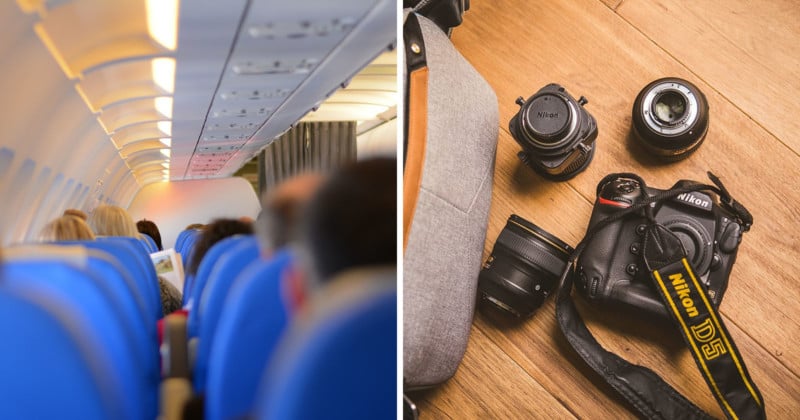 If you’re flying with pricey camera gear, it’s often advised that you bring it with you in a carry-on bag instead of risking all the handling issues that could happen behind-the-scenes with checked-in luggage. But your carry-on isn’t necessarily safe either, as photographer Sam Hurd recently discovered: he lost $20,000 in gear when a fellow passenger just walked off with his luggage.

After his plane landed at London’s Heathrow en route to Washington D.C., Hurd stood up in his window seat and waited for an older couple ahead of him to collect their things from the overhead compartment. After the long delay, Hurd was shocked to find that his luggage was no longer in the bin above him where he had placed it upon boarding.

Once the plane was completely emptied, a search located a single bag left on board in the bin opposite of Hurd’s. It was also a roller bag, but it was a different brand and noticeably lighter. Flight attendants peeked inside and told Hurd that it seemed to contain some personal belongings but lacked any identification.

Since he had to make a connecting flight, Hurd wasn’t able to spend much time in the airport looking for his missing bag. And in the days since, despite the bag having Hurd’s address and contact info, no one has contacted Hurd or the airport to report accidentally taking the wrong case.

“I always carry-on everything, so it’s shocking to think someone was daft enough to not realize what they’d done, or had the guts enough to just steal a bag from over my head,” Hurd tells PetaPixel. “It’s totally possible for someone to have just brought a scrap bag [to steal someone else’s.]”

And if a thief were to be caught in the act, they could claim that it was an honest mistake in which they accidentally grabbing the wrong case. What makes the issue even more scary is the fact that travelers are often forced to place their carry-on bags in other parts of the airplane when nearby overhead bins are full already.

The photographer now has some tips he has learned for how to avoid this nightmare in the future:

“Make sure you take stock of anything that can’t be easily insured (like photos on memory cards) and keep those items in your pockets or a bag under your seat and not overhead,” Hurd says. “Sit down and make a list of every serial number you can find.”

“Watch every person that goes near your overhead bin like a hawk,” Hurd continues. “Put your bag in the overhead bin on the opposite side so you can clearly maintain eye contact with it instead of having it be over your seat.”

Luckily for Hurd, everything that was lost was easily replaceable and can be ordered and shipped overnight to his home — his iPhone, memory cards, and passport were with him at his seat. His insurance also covers international losses and will be helping to replaced his lost equipment.

Should Photography Be Relaxing?