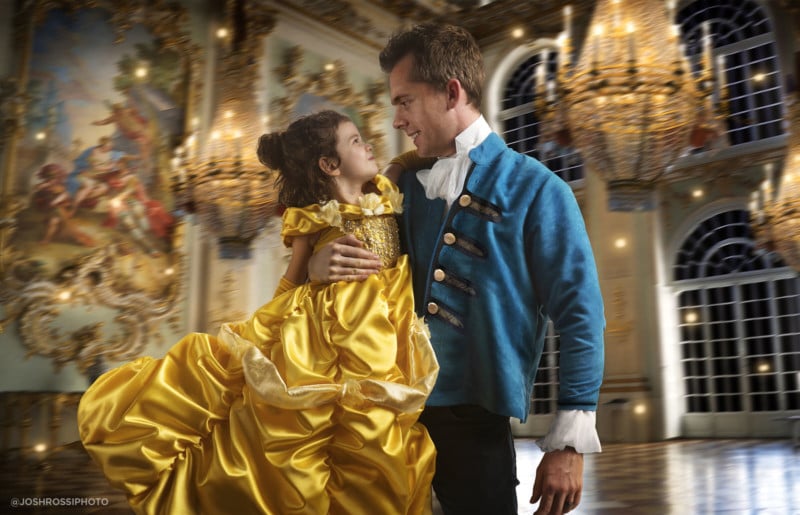 It was late, dark and eerie as I drove through the Swiss alps in my tiny rental car. I could barely see the road and was stuck in between two semi trucks. I should have been fearing for my life, but all I could think about was how excited my 3-year-old daughter, Nellee, would be after seeing what I was creating for her.

After traveling all over Europe for 1 week, I finally got all the shots I needed to create an epic Beauty and The Beast photo series for Nellee. I shot a total of 3 castles and 5 cities, and I randomly stopped at small provincial villages along the way to create the images. For me the trip to Europe was a token of my love for my daughter.

The story of Beauty and The Beast has such an amazing message of true love and being accepted that I wanted to recreate the scenes with my daughter. I also wanted to create something my daughter would have forever that showed the fun relationship and the love I have for her.

After creating the Wonder Woman series a few months ago and having it be seen by over 35 million people, I received a ton of emails. Out of all the emails, the ones I will remember the most were from other dads who said they were inspired to spend more quality time with their daughters.

I realized that one of the most important thing we can do as parents is spent time with our kids and play a little. Remember the crazy imagination we used to have as kids? Remember all the fun we had? The time I spend with my daughter lately has been like that… dreaming and creating together, and I love it!

The Photoshop portion of this shoot was insane! I had to cut out every piece of that dang gate you see above. Getting all the shots was difficult! I had about 7 days to go from city to city and get the shots I needed. Since some locations were 6 hours away, it was hard to get the best shooting conditions such as perfect time of day and good weather. Thankfully, most of the shots were indoors.

The below image was shot inside a castle in Milan Italy.

Nellee’s favorite part about the photo shoot was putting on her yellow dress, dancing with The Beast (me), and then taking the photos.

One of the hardest things in Photoshop is changing time of day. The only time that one of the castles was open was in the day. I needed a night time shot which would have been impossible so I had to improvise. After having all of the tiny windows cut out in Photoshop and replacing the chandeliers, I had to do some Photoshop magic to make it look like it was night time.

My favorite part about the shoot was being involved in something that my daughter, wife and I have in common: doing photo shoots and creating magical scenes. My wife Roxana booked most of the locations for me as I was traveling, and she also found Ella Dynae to make the dresses.

About the author: Josh Rossi is a commercial and advertising photographer based in Dorado, Puerto Rico. You can find more of his work on his website, training site, Facebook, and Instagram. This article was also published here.

The Cameras That Captured Winning Shots in World Press Photo 2017

Fake News in Mainstream Media: My Experience as a Photographer