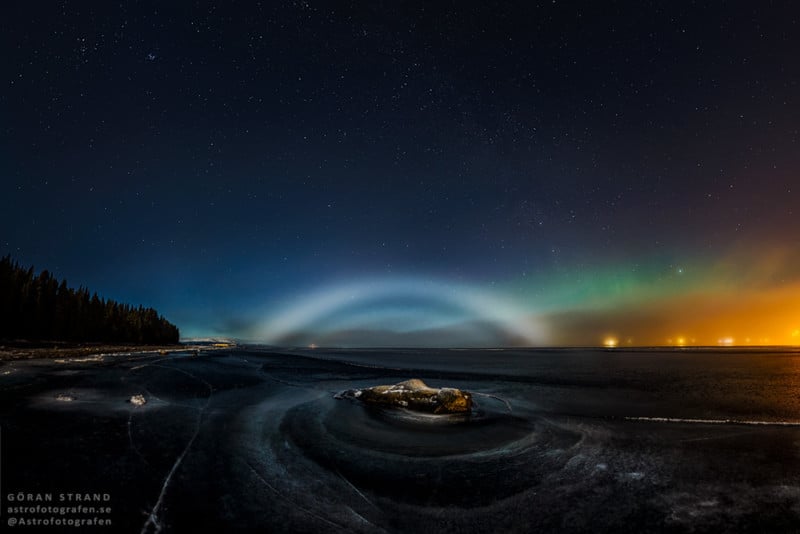 Over the years I’ve seen lots of different phenomena in the sky, but one that has been on my bucket list for quite some time is the very rare lunar fog bow. I’ve seen photos of it, but I’ve never managed to capture it in real life… until now.

This last Saturday turned out to be my lucky night. I hadn’t planed to go out at all, but after taking a look out north and seeing some faint Northern Lights, I decided to head out to see if the activity would increase.

After an hour or so I decided to drive to another location and after parking the car, and started walking on the frozen shoreline of lake Storsjön. A couple of hundred meters down the shore, I looked up, and there it was: a lunar fog bow. I immediately stopped and pulled the camera from my backpack to start taking some photos of it. While shooting I felt so excited and happy to finally see this beautiful white fog bow, it was more beautiful than I ever excepted. And as a bonus, there were some Northern Lights visible at the same time!

A fog bog is pretty much the same as a rainbow. It’s located in the opposite direction of the Moon and its height correlates to the height of the Moon in the same way a rainbow’s height correlates to the height of the Sun. Fog bows are almost completely white, with faint reds on the outside and blues inside. The colors are so washed out because the bow in each color is very broad, and the colors overlap.