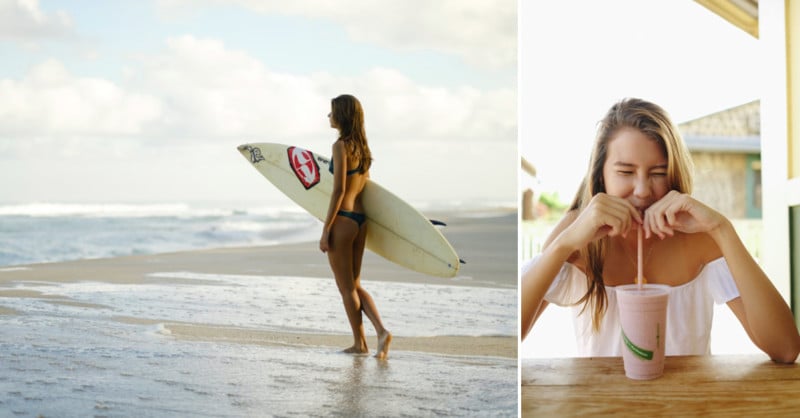 I’ve got a love/hate relationship with lifestyle photography. Lifestyle photography for me photos that feel like candid moments where a person is looking at you and not your camera. Each photograph feels like the viewer is with them living in the moment with whomever is in the photograph, and I love that.

I love being able to transport someone to Hawaii and experience the lifestyle we’re blessed to have every single day of the year. But sometimes you shoot with someone for the first time and that chemistry just isn’t there and you don’t click at all. I hate that… a lot.

So over the years I’ve come up with ways to break the ice and get that instant chemistry that leads to photographs that feel genuine and true to the last pixel. Luckily for me, Haley didn’t need any of this, but I’ve found that doing these few simple things with each new acquaintance ensures that you’ll break the ice quickly; the two of you will “warm up” a lot faster, leading you to have way more keepers at the end of the day.

The first thing I preach is: don’t pose, don’t act, just do. When you’ve got someone who is shy or more aware of the camera lens than the person behind it, posing makes everything feel rigid and Pinocchio-like. The best thing you can do is make your subject do something crazy without giving them time to think about it all.

For this photo, I had Haley spinning in circles ridiculously fast as she moved up the beach and I followed her. The majority of the resulting photos were completely unusable, but it’s a situation that is impossible not to laugh at. After reviewing the images with her and laughing even more, I told her to slow it down a notch and we captured this beautiful moment. 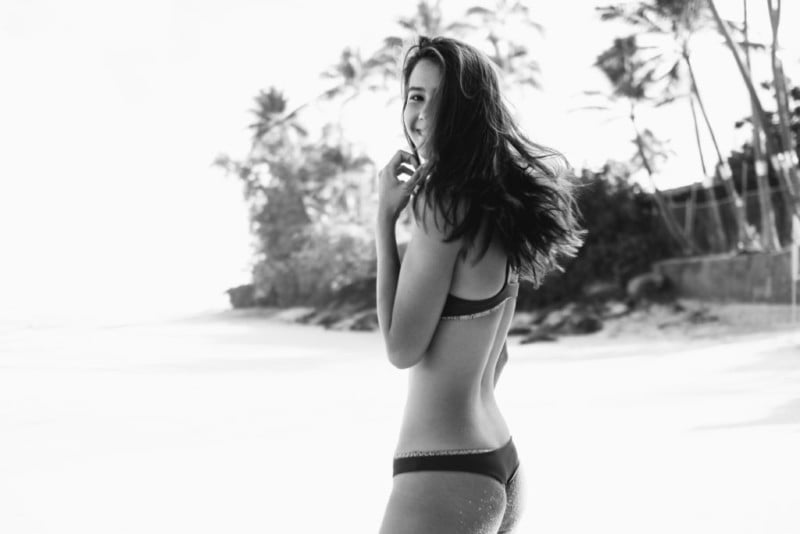 The second thing I like to do to ensure instant awesome photos are captured from the start, is to give my subject something to do with their hands…. because karate chop hands have ruined everyone’s photos at one time or another.

I really wanted Haley to have a few photos where it looked like she was sharing a smoothie with a best friend or a significant other. So in order to capture that moment, I had to take it up a notch again.

Getting Haley to give me her best brain freeze squinting face in itself made for an amazing photograph that feels fun and cute, but the photo after that gives that genuine feel. It’s almost as if, after you do something crazy and ridiculous, they’re always on a high of dopamine and they just let their guards down and give you something intimate like this.

Third (and lastly) sometimes a lifestyle photograph needs to be serious, but telling someone to be serious can get lost in translation. So what do I do? Scare them. Scare them real good.

Now, just as a disclaimer, under no circumstance would I have let Haley go into double overhead waves that closed out and were obviously too dangerous. But telling her to stand there for a few seconds as I get a few shots before she gets to the water lets her observe the situation and really take it in, and that’s exactly what I was going for. There’s a few scenarios where I would say scaring them real good does not work. For instance: standing on the absolute edge of the Grand Canyon, sitting on the top of a Ferris Wheel, riding a live tiger like a pony. But it does work in situations where they’re able to observe the danger they could put themselves into.

In Hawaii we’ve got a lot of hikes, a lot of cliffs people like to jump off of, basically a lot of really high places that photograph really well. 98% of the time just by placing them near these adrenaline situations distract their mind just enough to capture an intimate moment with their guard down. The other 2%, their middle name is Evel Kenievel or they’re already scared and it’s best to talk them down and move on. The moral of this story is to be crazy, take things up a notch above ridiculousness. Laugh at being silly, then bring it back down to earth and they’ll be loosened up and everything in those shots will just feel real. Then, when you need that serious photo where they look like they’ve reached their place of solitude, give them a little scare and let them truly observe where they are and what’s going on.

Now, of course, you need to be personal to pull this off and not come off as a crazy person; you need people skills to begin with. And therein lies the real allure of lifestyle photography: it lets you connect with others and share these moments with them. At least that’s why I love it so much.

About the author: Allan Higa is a Hawaii-based lifestyle and travel photographer. You can find more of his work on his website, or by following him on Facebook and Instagram. This article also appeared here.

How NOT to Sell Photo Paper Online