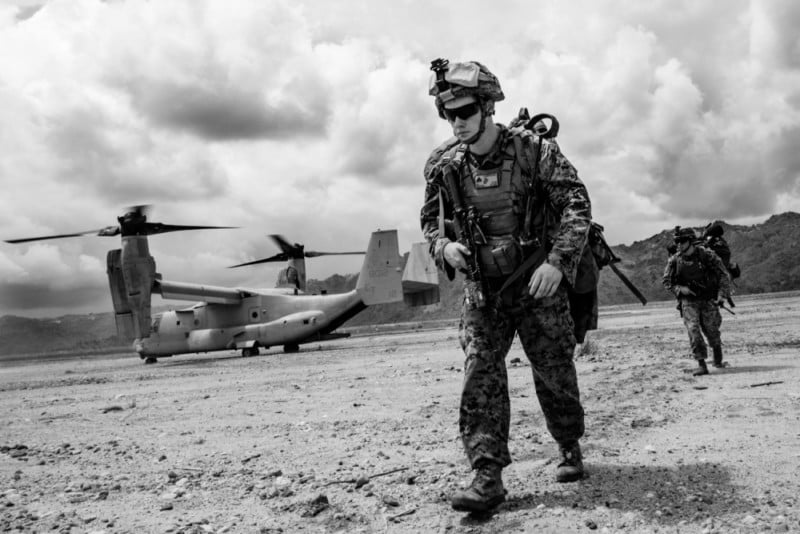 I have the best job in the world. Seriously.

As a Navy public affairs officer, I get to take pictures of amphibious assault vehicles storming a beach, Marines landing in tiltrotor aircraft, and the unusual tableaus that make up life in the Navy.

But as Tom Williams, a veteran photojournalist with Roll Call, likes to say, it’s the moments in between that make the best pictures. And that’s what I sought to do in the Philippines, where I recently supported PHIBLEX 33, a joint exercise between the U.S. and Philippine armed forces. PHIBLEX has a lot of moving parts. The Bonhomme Richard Expeditionary Strike Group inserted more than 1,000 Marines ashore via air and sea to train with their Filipino counterparts, while conducting humanitarian operations throughout the island of Luzon. I made pictures of Echo Company, 2nd Marines, 4th Marine Regiment as they flew into Crow Valley in MV-22 Osprey tiltrotor transports, getting “sugar-cookied” by the dust and gravel kicked up by the Osprey’s massive turboprops.

I stood on a rain-drenched beach in San Antonio and made pictures of U.S. Navy beach masters teaching their Philippine Navy counterparts how to bring an amphibious force ashore. I hopped an Osprey with members of the Filipino media to tour the USS Bonhomme Richard, an amphibious assault vessel that’s part troop ship, part aircraft carrier and part hospital. But it’s not about the hardware. It’s about Philippine Navy sailors pondering the sea after a long day of training with American sailors. It’s about a Staff Sergeant taking a breather in the sweltering humidity after an airborne insertion. It’s about Filipino reporters taking a selfie on the deck of the Bonhomme Richard, enjoying a break in the dreary, socked-in weather typical of monsoon season. All but one of these images were made with one of my personal cameras, the Fujifilm X-T1, and an 18mm f/2 lens. I love making pictures with the X-T1—the body is light, and despite the lens not being weather-sealed, it withstood driving rain, saltwater and landing zone dust. Plus, the 28mm field of view was ideal for taking in the complexity of everything unfolding around me.

Conditions weren’t perfect. My lenses fogged easily in the wool-thick humidity, and during the amphibious phase of the exercise, near-constant driving rain meant I was always wiping off my lens. At one point, shooting in thigh-deep surf, I looked down to discover that my Nikon was half-submerged (nice work on the weather-sealing, guys!).

But any day I get to put on my uniform and make pictures is a good day.

About the author: Rob Kunzig is a Navy Reserve public affairs officer and freelance photojournalist. He lives in Alexandria, Virginia with his family. His views do not necessarily reflect those of the Department of the Navy, nor the Department of Defense.

Quick Tip: How to Handle Difficult to Remove Spots in Lightroom