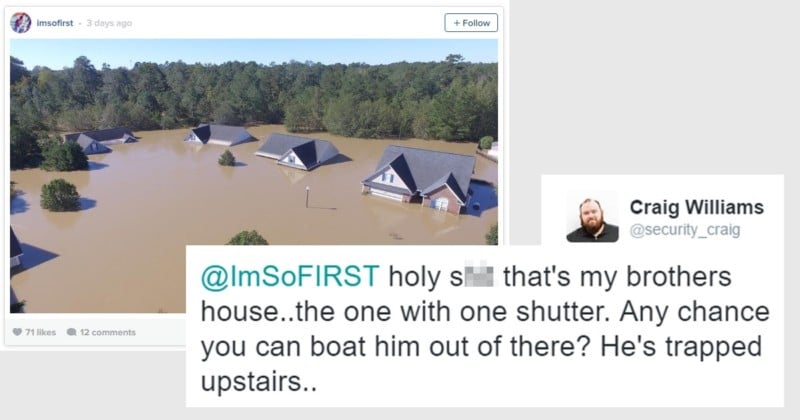 This is one of the best “Internet saves the day” stories we’ve run across. When a filmmaker in North Carolina took his drone out to survey the damage done by Hurricane Matthew, he inadvertently helped rescue a man and his elderly dog who were trapped in a flooded house.

You can’t make this stuff up.

On October 9th, filmmaker ImSoFIRST decided to take his drone out and capture footage of Hope Mills, North Carolina, where entire houses were underwater because of Hurricane Matthew. After the shoot, he posted this still to Instagram and Twitter:

That’s when things got interesting… A man named Craig Williams spotted his brother’s house in the photo and reached out to ImSoFIRST for help:

@ImSoFIRST holy shit that's my brothers house..the one with one shutter. Any chance you can boat him out of there? He's trapped upstairs..

@ImSoFIRST completely serious, he has an old dog with him that can't swim. Cumberland county says rescue is not possible yet

ImSoFIRST gave Williams his phone number and, together, they managed to coordinate a rescue for Craig’s brother and dog. Craig picks up the story on a GoFundMe page he set up to help his brother recuperate after the flooding destroyed almost everything he owned:

At that point @ImSoFIRST sent me his phone number and I called him to get help. He couldn’t believe there were still people in those houses since they were so far underwater. Apparently people had assumed they were already evacuated.

@ImSoFIRST immediately dropped everything and drove back to my brothers street—or at least as close as he could get. He didn’t have a boat, but he had seen boats. He knew he could get someone to help. Along the way he found a FEMA crew going door to door. He informed them there were still people trapped on Booker Place where nearly everything was under water. The rescuers descended upon Chris immediately. Finally he and Lana were safe.

Of course, ImSoFIRST captured the rescue for social media as well:

Amazing this guy just saved my brother and his dog from the flooding. #GoTeamInternet Thanks so much man! #HopeMills #HurricaneMatthew https://t.co/y8RHSuy7mB

A truly incredible story with a happy ending. To read the full tale from Craig’s perspective (he was desperately searching social media trying to find someone who could get his brother out when he stumbled across the photo) or if you’d like to help his brother Chris recover some of what he lost in the flooding, head over to the GoFundMe page here.

Disneyland Used to Photoshop Out Cigarettes in Portraits of Walt Disney