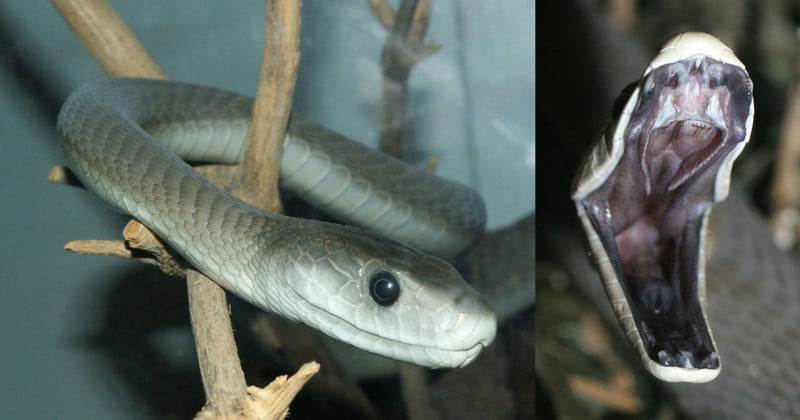 Photographer Mark Laita has a mention in Wikipedia for a wild and unusual reason: he was bitten by a black mamba (one of the world’s deadliest snakes), survived, and found that he had accidentally captured the bite on camera.

The incident, which was widely reported on back in 2012, occurred while Laita was shooting portraits of spectacular snakes species for his project and book, titled Serpentine.

One of the snakes Laita selected was the black mamba, a highly aggressive snake that’s considered to be one of the most dangerous to humans. A bite will generally cause a human to collapse within 45 minutes and die just hours later. Prior to antivenom for the bite becoming available, basically all black mamba bites were a death sentence.

Laita found a black mamba to photograph for his project at the home of a snake collector in Central America. Although some owners of venomous snakes have the venom glands removed, this particular black mamba was still fully venomous.

Special safety precautions were taken for each snake Laita shot: for the black mamba, one was that Laita wore shorts to avoid scaring the creature with movements from pant legs (and to make sure it didn’t slither up his leg).

After photographing the snake on a black backdrop with a 8×10 view camera and a Hasselblad medium format camera, Laita switched to a point-and-shoot when the snake began slithering near Laita.

Dozens of photos later, the snake’s owner extended a hook to collect the snake, but that’s when disaster struck. Instead of hooking the snake cleanly, the owner accidentally snagged a red cable that was part of Laita’s camera setup. Startled, the black mamba lashed out and sank its fangs into Laita’s calf.

“The blood was gushing out,” Laita told Strange Behaviors. “Both fangs hit an artery in my calf, like the snake knew what it was doing.”

After several minutes and then hours passed and Laita was still feeling fine — experts recommend heading straight for a hospital, by the way — the crew concluded that Laita didn’t have any venom in his system. The photographer believes that it was either a “dry bite,” when a snake doesn’t release any venom, or that his heavy flow of blood pushed out the venom.

Later that night, when Laita began reviewing the photos he had taken during the shoot, he found that he had snapped a shot at the exact moment the snake sank its fangs into his leg. 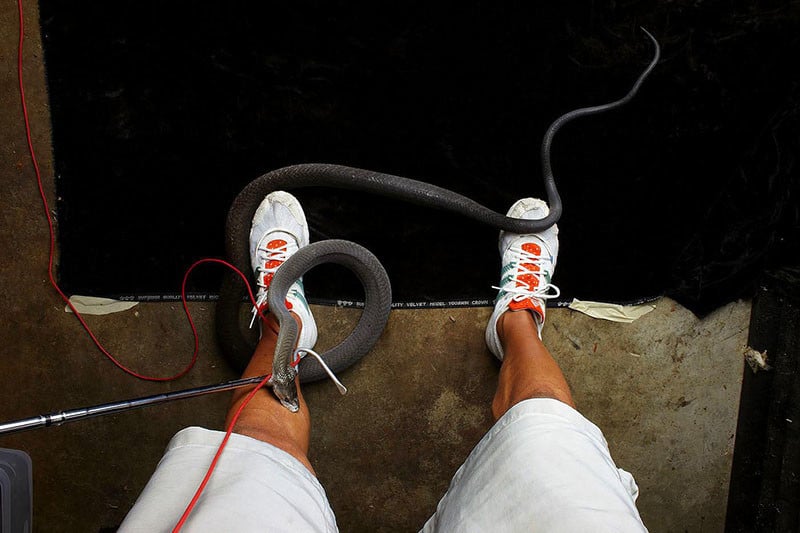 Surviving a black mamba bite without treatment is so rare that Laita’s story is now mentioned in Wikipedia’s “black mamba” article.

And yes, the black mamba did have its portrait included in Laita’s book Serpentine, even though it tried to kill its photographer. 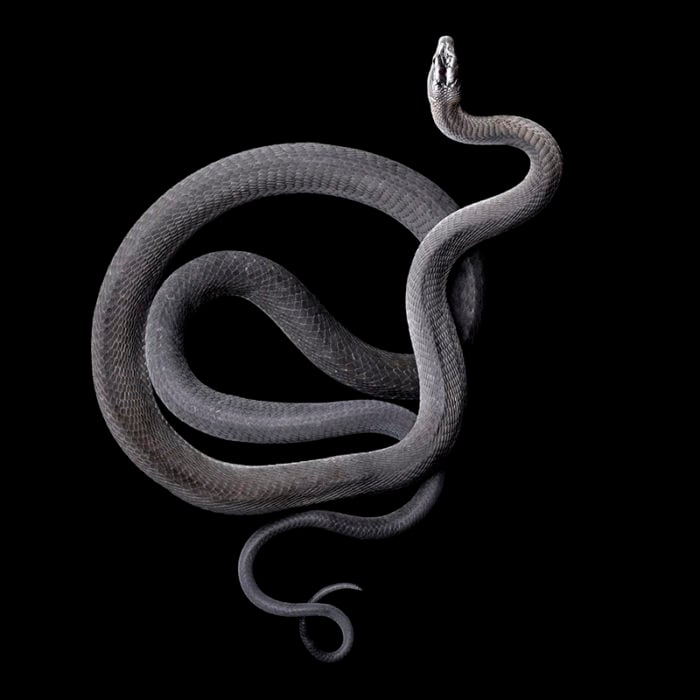