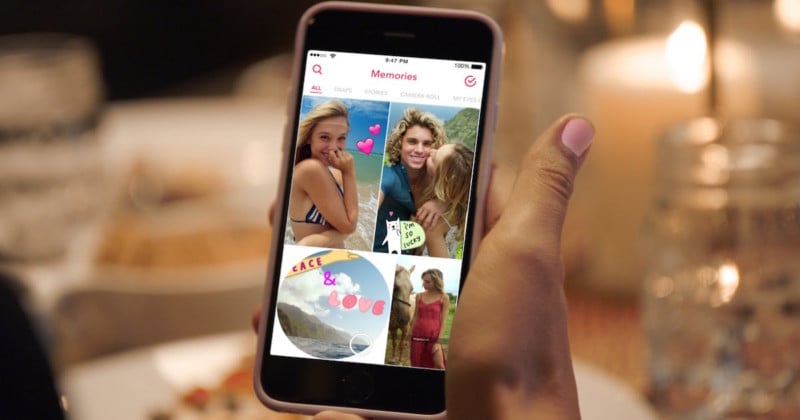 Snapchat has evolved WAY past the simple self-destructing photo messenger it started as. And today, the app took a big leap forward by introducing ‘Memories,’ basically a Camera Roll inside the Snapchat app that lets you save, search, and replay or re-share old photos and videos.

The company is calling Memories “a personal collection of your favorite moments that lives below the Camera screen.”

Translating from PR speak, the Memories feature is a few things rolled into one: basically, it’s an intelligent searchable camera roll and a cloud storage space with the ability to mark images/videos as private (AKA “My Eyes Only”). If you share a Memory that’s older than 24 hours to your story or send it as a snap, it appears with a white border so the recipient knows it’s from the past, but you can replay a bunch of old snaps at once too.

This short (if awkward) video intro explains what Memories is all about and how it works:

Memories is a big deal no matter how you slice it, but whether or not Snapchat users will embrace it is the real question now.

One the one hand, Memories makes your phone’s camera roll all but obsolete for those people who Snapchat extremely often. It lets you search by keyword, re-share old memories, and recover photos even if you lose or damage your phone. On the other hand, Memories changes the ethereal, here-today-gone-tomorrow DNA that Snapchat has built its very empire upon.

Will Snapchat see a decrease in usage because people can save things and share them later? Will Memories kill the immediacy of the photo sharing/messaging app? Only time will tell.

And speaking of time, Snapchat announced Memories earlier today, but they’ll be rolling it out selectively over the next 30 days starting with the West Coast. Keep an eye out to Memories by swiping up on your Snapchat camera screen.