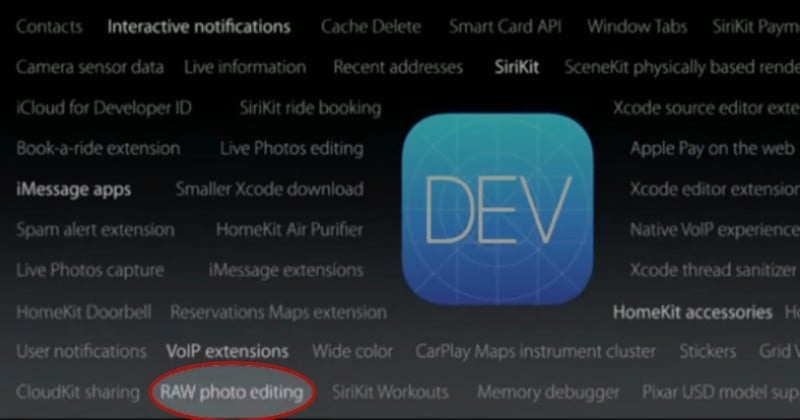 Need a pick-me-up this morning? We’ve got you covered. It turns out Apple snuck a big photography announcement into the background of the WWDC presentation yesterday: RAW photo editing is coming to iOS 10.

The feature was hidden in the background among the many other listed improvements for developers in the next version of iOS, but since Apple didn’t call it out by name during the presentation, it went largely unnoticed. But as you can see from this screenshot posted yesterday evening to Reddit, RAW Photo Editing is coming:

This is a huge step towards making the iPad Pro a must-have tool for photographers on-the-go. Thus far, all kinds of workarounds and “hacks” had been proposed online for editing your actual RAW files on iOS rather than JPEG previews; it seems these workarounds will become obsolete in iOS 10, your favorite developers can just integrate it into their apps.

Does this mean RAW photo capture is also coming? It’s not 100% clear, but some devs who already have access to the beta say yes:

“What this will do is to allow developers to also shoot [RAW photos] straight out of the camera app,” writes the original poster on Reddit.

“Based on what I read on the iOS 10 release notes, you would be able to take photos and you’d get a .dng + .jpg pair,” says another.

Given Apple’s dedication to keeping their ecosystem entirely self-sufficient, being able to both capture AND edit RAWs with an Apple device would make sense.

For now we’ll content ourselves with RAW editing, which you’ll be able to take advantage of as soon as the iOS 10 public beta launches in July. Get your Apple Pencils ready.