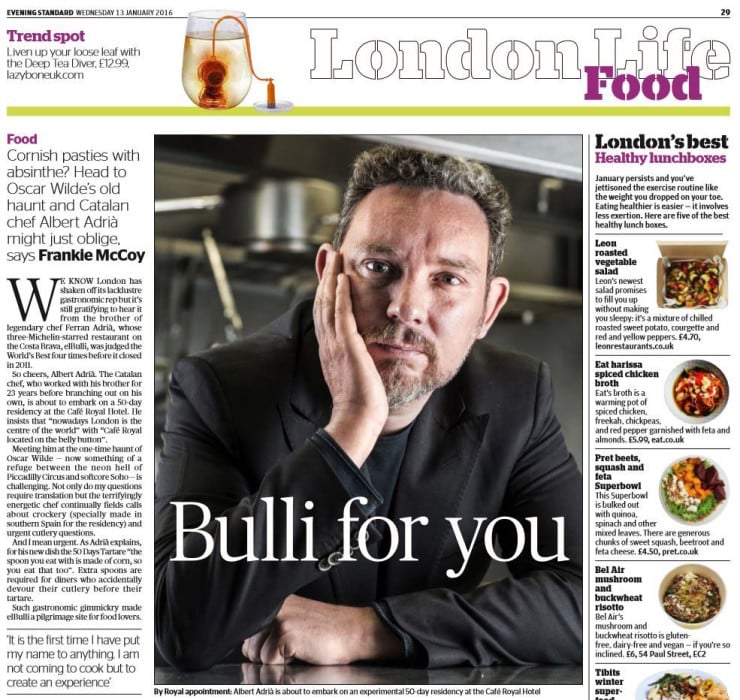 I had a great opportunity to do a “behind the scenes” of a recent portrait feature shoot which my very good friend Daniel Hambury was doing for the London Evening Standard. In fact I was mainly assisting, but couldn’t pass up the opportunity to document what happens as it’s something I’ve always been intensely interested in.

Daniel is shortlisted for the UK Picture Editors Guild Awards for 2015 in the category of Business Photographer Of The Year, which is much deserved as he’s continuously creating excellent imagery with essential variety, humour and potency while under huge pressure. Hopefully he’ll win it. You can see more of his pictures on his website. He also gave me my “big break” into sports photography for which I owe him at least a pint.

He shoots a lot for the Evening Standard, mainly feature portraits like the one above that accompany a one or two page “feature” article, as well as shooting sport for PA and for his own agency, Focus Images. As I know a bit about sport photography and nothing about feature portraits, I was very pleased to tag along as HPLS (human powered light stand) while Daniel went about his business.

The assignment was to shoot Albert Adrià, a rather famous chef, at the Café Royal in Regent Street. Albert is behind many of the most celebrated dishes at one of the world’s best restaurants, El Bulli in Barcelona. The Evening Standard story was to be about him taking up a rock-star like 50 day “residency” at the Café Royal. As usual, the catch was that we’d have only 5-10 minutes with the famous chef during which to capture as wide a variety of images as possible.

After meeting up with the hotel’s PR and chef’s PR in the rather swish reception of the hotel, we headed up to a dining room which where we were to do the shoot. It was the least suitable place to photograph anyone that I could have imagined – lots of mirrors (hard to hide lights), very yellow ambient lighting, messy background etc. Simply not good. With about 5 minutes to go until Albert’s arrival, there had to be a fix or we were in trouble. And so the skills of the experienced photographer started to become evident. Within seconds Daniel had found an adjoining kitchen which wasn’t too busy so we unceremoniously took it over and set up an impromptu photo studio. After all, a kitchen is a much more obvious place to photograph a chef than a dining room.

While dodging the working hotel staff we quickly unpacked a pair of Quad lights, assembled an octabox, softbox, power packs and stands in a couple of minutes resulting in an impromptu studio setup in the mainly stainless steel kitchen. Being a working kitchen it had plenty of nice props like pans, knives, etc which were sure to come in handy.

Albert then arrived with mini entourage in tow, filling the small space Daniel had selected. This resulted in another excellent example of the off-camera skills required for jobs like this. Managing the entourage, who all want to get their own phone pictures for social media and have their own ideas of what looks good, is fraught with peril especially as they are in positions of power over the amount of time you have and the location flexibility. Within moments they had been somehow marshalled into a spot where they could get what they wanted without getting in the way, leaving Daniel to speak 1-1 with Adrian.

This 1-1 contact is vital to build a relationship between the photographer and the subject. Somehow you need to be able to convince someone you’ve never met before, and will know for only 5-10 minutes, to “perform” in front of your camera and do what you ask them to do, while being relaxed and at ease. It’s something I’ve always found quite difficult and awkward, but it took Daniel about a minute before he and Albert were laughing and chatting like they were good friends. I’m none the wiser how that happened, but it was pretty cool. A happy, relaxed subject will result in much better and insightful photographs. So, on with the show. With only a few minutes to capture as many looks as possible, Daniel had to direct Albert to do what he wanted, position him, get the lights right and so on.

With a flash-lit shoot like this, getting the lighting power and ratios correct is key. Firstly, you generally don’t want to knock out the ambient light too much as the context of the shoot in the kitchen is important. Then you need to get the two flash heads powered correctly, ensure they aren’t causing any horrible reflections in the stainless steel, and ensure they are triggering properly. usually it takes me 10-20 shots to get the this all sorted. Daniel twiddled the dials on the flashes, took one test shot, and that was it – all done and ready, and time to get down to business.

While all this is going on I was helping out with lens swaps, moving the lights and generally trying not to get in the way. The shoot moves fast, but still there seems to be time for Daniel and I to have a quick chat about some different shot ideas & positions. Using 3 lenses he was after a number of different looks per set up which economises on the amount of reorganising you need to do. Long (85mm), medium zoom and wide gives plenty of scope for variety with a single lighting setup.

The lighting is so important to get right, and Daniel knew that he wanted to get a decent separation between Albert and the background for the low shots, especially as there was a danger that his dark grey suit could blend into the stainless steel in the dark corner in the background. This meant moving the octabox in closer and a bit behind Albert so it would put a nice, gentle rim light onto his shoulders.

More shots, more positions, more ushering of PR people and kitchen workers out of the way, and then it was over. Albert and team headed off to a waiting car leaving us to pack up and leave everything exactly as we found it.

You can see from the shots above some of the variety of looks and shapes required. Knowing to leave blank space for text overlays, shoot portrait and landscape, tight, loose etc. The shot the Evening Standard used was the penultimate one on the last row. Interestingly they went for a shot with quite dramatic lighting – you can see the effect of the rim light compared to the shot on the right side of the middle row, and the result is a really good, eye catching portrait to illustrate the article with the headline splashed across the Albert’s dark suit.

With everything packed up it seemed a shame not to take a snap of Daniel in on the rather grand mezzanine of the Café Royal. You can see the gear he needs to take with him from shoot to shoot – a Peli case with the lighting gear in, a sizeable rucksack with cameras & lenses, and a shoulder bag with the softbox & octabox. Not a lot of fun hauling that lot on and off the Tube.

People may say “what a great job, photographing all these famous people, I could do that” but they never see what happens behind the scenes. To be able to select the location, manage and control the “set” and everyone on it, direct the shoot, establish a rapport with the subject instantly, handle the technical aspects of lighting & cameras, all while being watched by PRs and assistants, in just a few minutes, takes years of experience. And then you’ve got to edit and process the pictures afterwards and deliver them on time.

I’ve attempted to do similar things in the past and struggled, often thinking afterwards “I could have done this or that” but didn’t. This is why you hire an experienced pro who knows what they are doing and can turn in the results reliably, time after time. Clicking the shutter is simply the culmination of the process.

About the author: Andy Tobin is a former sports, event, and advertising photographer based out of Guildford, UK, who recently moved on to the quieter, calmer world of landscape photography. You can find more of Andy’s work and words on his website. This post was also published here.

Ep. 69: David DuChemin Five Years After His Accident – and more