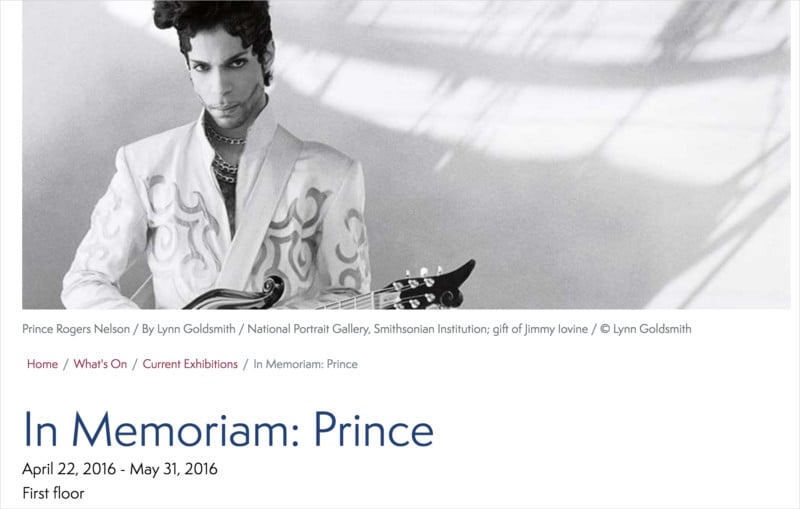 Copyright infringement isn’t just perpetrated by evil corporations and people knowingly breaking the law, laughing as they do. Even the Smithsonian Institution National Portrait Gallery messes up once in a while, as photographer Lynn Goldsmith is pointing out.

Goldsmith’s studio is accusing the National Portrait Gallery of copyright infringement for distributing her 1993 portrait of Prince digitally to the press, and encouraging visitors to their “In Memoriam” space to photograph and film the portrait on display.

According to PDN, the portrait was donated to the gallery by collector Jimmy Iovine, who purchased it from Goldsmith. The issue is that the print was sold to Iovine with specific stipulations, including the fact that Goldsmith retained copyright, that the print could not “published, copied, televised, digitized, or reproduce in any form whatsoever,” and that it was “intended solely and exclusively for your personal viewing enjoyment.”

Now Goldsmith is seeking restitution from the gallery, not necessarily for displaying the image—although it seems that, too, goes against the stipulations above—but for making a digital copy available for download to the media. “We feel financial restitution is necessary to resolve [this],” Goldsmith’s licensing manager Rachel Simon told PDN. “As you can imagine, that image cannot be licensed for any fee ever again as it has been released WORLDWIDE for free in some cases.”

The Smithsonian removed the option to download a copy of the portrait after receiving a cease and desist from Goldsmith. No amount of money has been quoted by Goldsmith’s studio or the portrait gallery, but the two are currently having “discussions.”

The Power of Shutter Speed In Two Photographs