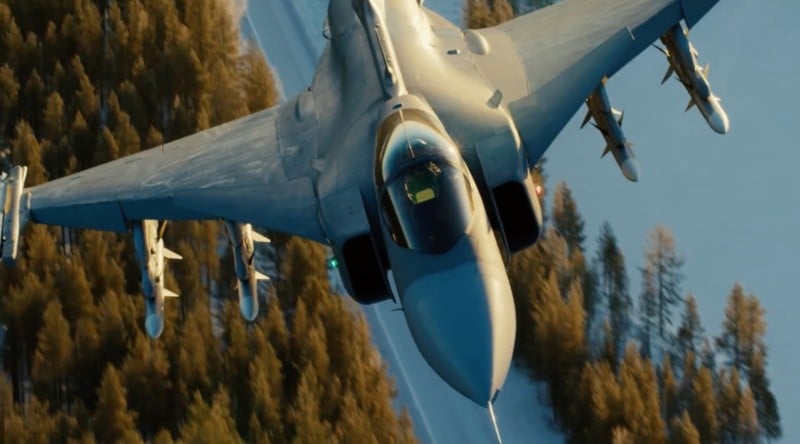 The GSS 520 5-axis system is NOT your typical gimbal. Designed by Gyro-stabilized Systems to work at “high velocity”, it can capture buttery smooth footage while strapped to the side of a fighter jet going over 300 knots and pulling 2.5 Gs!

The breathtaking video below shows you a little bit of what the GSS 520 can do while strapped to a jet following Saab Defence and Security’s multi-role fighter aircraft Gripen. We can’t help but gawk when we think of the kinds of forces it was competing with while filming this footage.

The GSS 520 was designed specially for Swedish aerial filming company Blue Sky in order to capture the video above. There was no gyro-stabilized 5-axis system on the market that could capture stable footage like this at 300+ knots—most aerial gyros are rated for helicopter use, maxing out around 125 knots—so Blue Sky challenged GSS to build it themselves.

The GSS 520 was then mounted on the weapons station of a friggin’ fighter jet, and used to shoot the Gripen in flight using a Red Dragon 6K and Canon 30-300mm lens.

“Aerial DP Peter Degerfeldt was flying in the backseat of the Saab 105, operating the Gyro via modem,” explains Blue Sky in the video description. “Picture was transmitted via the Paralinx Tomahawk HD inside the cockpit to a Atomos 7” recorder/monitor. Despite the fact it was -20C (-4 F ) on ground and probably much colder in the air, everything went flawlessly.” 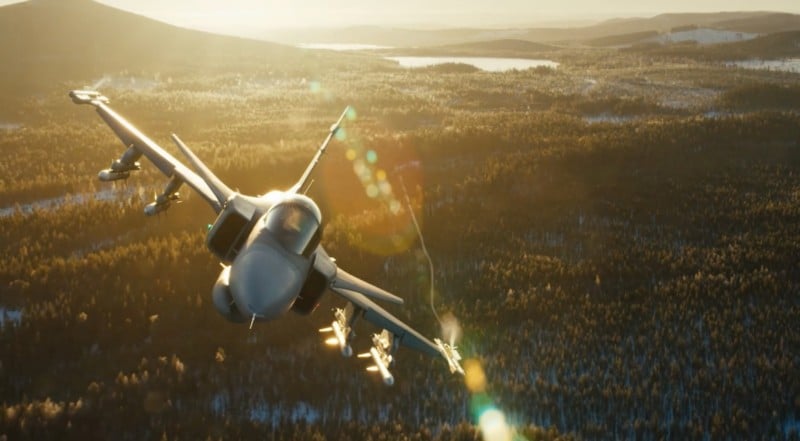 No matter how they strained the gyro, it still worked. “I could zoom all the way in at 300mm, still rock solid at 300 knots; that’s pretty brutal,” says Degerfeldt. “We tried to provoke the gyro with high speeds, banking, pulling 2.5 Gs, even during a roll it was rock steady.”

It’s a video worth watching and marveling at a few more times over. And then, if you want to learn more about the guys behind the gyro, head over to Blue Sky by clicking here.