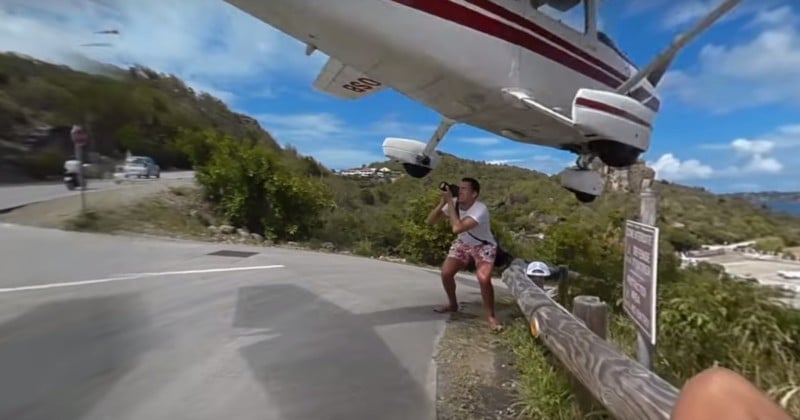 When people say you should do “anything” to get the shot, getting decapitated or losing a hand might not be what they had in mind. But that’s what one tourist almost did while trying to get a photo of a plane landing at the dangerous St. Bart’s airport.

The Gustaf III airport on the island of St. Bart’s is known for how incredibly close planes get to the road on approach. In some cases, you could reach up and touch them… which is probably why it’s considered the third most dangerous airport in the world.

The 360° video below shows the incredibly close call that happened earlier this week when a tourist in search of the perfect picture of an approaching plane nearly lost his head in the process.

The footage was captured by local resident and videographer Sébastien Politano, and if you think it’s just the perspective that makes it look like the plane got close, think again.

According to Politano, who was testing out a new 360° camera, the photographer himself yelled that the plane “hit my hand!” Close call doesn’t quite describe this one…

Finds
airplane, airport, closecall, dangerous, plane
Related Articles
Discussion
Trending Articles
Blood Moon, Aurora, and Milky Way Captured in One Photo
May 19, 2022
Wedding Photographer Tells Couple to Act Drunk, Gets Amazing Portraits
May 20, 2022
The Science Behind Why Watches are Set to 10:10 in Advertising Photos
May 17, 2022
You Are Still a Photographer, Even If No One Likes Your Images
May 21, 2022
Photographer Builds Giant Camera and Darkroom Bus
11 hours ago