If you’ve been following the ongoing presidential race in the US, you may have seen the Bernie Sanders video above that has been going viral over the past 2 weeks. Titled “TOGETHER,” it has the tagline: “America should work for all of us. #votetogether.”

But one photographer isn’t happy about the way his concept and style were used as inspiration for the ad.

Photographer John Clang created a stop-motion ad for Hopenhagen back in 2009 to raise awareness on climate change during a UN conference. Here’s his 30-second video:

Clang says that he started receiving messages this week from people who wanted to inform him that there was now a similar video on the Web. The photographer was also bothered by the fact that there was no mention of him or his video initially, even though a mention was soon added to description on Vimeo:

Clang tells PetaPixel that he just wishes that director Jonathan Olinger of the NY-based HUMAN had clearly acknowledged his work from the get go.

“I admire Jonathan Olinger’s passion in creating good concerted efforts for great causes,” the photographer says. “His passion is, what I always believe in, much needed in this artistry. I would have hoped he had approached me earlier to discuss on this project, especially we are both New Yorkers.”

“Understandably sometimes when one sees something that resonates with them, it’s difficult to erase from their mind,” he continues. “I think I deserve a simple respect and acknowledgment from him. I respect what he does and I do hope we both can be friends.” 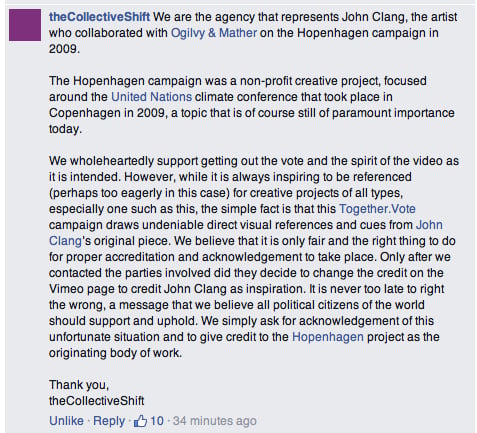 Here are the statements released by Olinger and TOGETHER.vote to PetaPixel and on Facebook in response to Clang’s complaints:

In building this film our volunteer creative team drew upon a number of visual references and techniques to visually support a simple idea that we believed in—togetherness. The film was created with love by group of passionate volunteers who wanted to offer an alternative to divisive and hateful rhetoric that has emerged in America. We stand by the film and all the artists who shaped its evolution and believe it speaks for itself. All artists recognize that art is a communal and participatory process building on the exploration and mutual exchange of each other’s work, ideas and techniques. It’s our hope that all of the artists who inspired us feel honored to see their ideas morph through new acts of creative expression. Art has a powerful role to play in shaping society and we are happy to acknowledge John Clang as well as all of the artists we drew inspiration from. We only regret that we did not acknowledge him sooner and apologize for how that made him feel as an artist. We have deep respect for him and were deeply inspired by John Clang’s beautiful photo/stop-motion technique. His artistic technique and vision was a foundational reference when we created this film as well as the brilliant text-on-screen treatment of Chimamanda Ngozi Adichie’s words as seen during Beyoncé’s live performance of “Flawless” by creative director Todd Tourso and family photo usage inspired by genius directors Martin + Lindsay. In addition we applaud John’s effort to support the United Nations climate conference in Copenhagen though his film Hopenhagen. It is our belief that his work and that of his agency theCollectiveShift contributed greatly to the creation of a pathway leading to the #cop21 climate change agreement in Paris last year. Like John’s film, this was a visionary achievement upon which many people will build. To John Clang, Todd Tourso and Martin + Lindsay, you truly are an inspiration and we thank you and can only hope that other artists can find inspiration in our work as we have yours to create new and greater creative expressions to advance humanity. 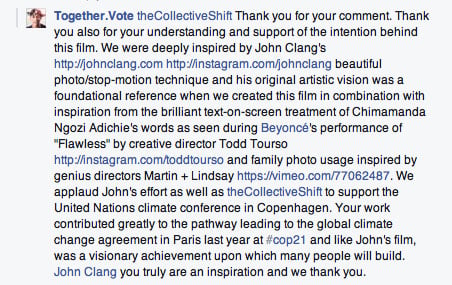 The Vimeo video has also been updated with additional information and a link to Clang’s website:

This whole thing comes about a week after similar complaints by photographer Rob Whitworth, who claims his (and another photographer’s) style was used as an inspiration for a Nike commercial without proper acknowledgement.