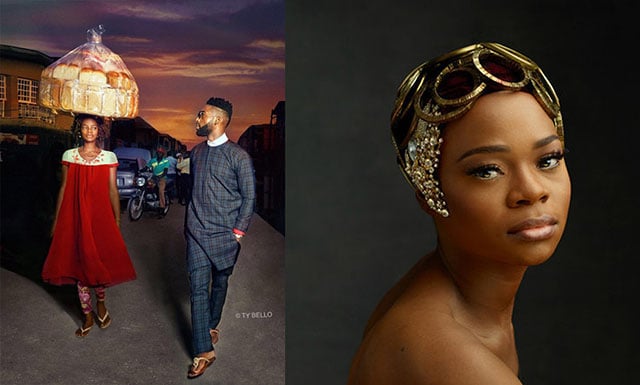 Life took a 180-degree turn last week for one woman in Nigeria. While walking through town to sell bread, she stumbled into the frame of a pop star’s photo shoot. One thing led to another, and now that accidental photo bomb has earned the woman a modeling contract.


Buzzfeed reports that 27-year-old Olajumoke Orisaguna was carrying a load of bread on her head in Lagos when she came across English musician Tinie Tempah, who was posing for photos with Nigerian photographer and singer Ty Bello.

“BEAUTIFUL. WHO IS SHE,” wrote Bello in the caption of the photo. “Every one has been asking if this lady is a model. It was just perfect coincidence. She just happened to be walking by while I photographed. It happened so fast.”

“She definitely SHOULD be a model,” she continues. “I’m happy to help her build a portfolio if she’s interested. She’s so beautiful and photographed so well. I’ll find a way to track her down somehow. You guys can also help.”

Other people had come across the woman in that area recently, and soon Orisaguna was identified.

Bello got in touch with Orisaguna and did a portrait shoot with her for the magazine This Day Style.

“Someone special our #olajumoke made it on the cover of this day style this morning,” Bello writes. “This just made me cry. She really is a blessed woman with an amazing story. I almost cant believe it!”

Orisaguna posed for some of the portraits with her 14-month-old daughter.

Bello found out that Orisaguna was originally a hair stylist in a different city who moved to Lagos and became a bread seller after not being able to make enough money. Her husband stayed behind with their 5-year-old child when Orisaguna relocated with their daughter.

These portraits of Orisaguna have since gone viral in Nigeria and around the world, and this week a Nigerian modeling agency announced that they’ve signed Orisaguna to a modeling contract:

Orisaguna is now being interviewed and photographed by other major publications around the world, including CNN International.

“She’s really inspired so many people out here in Nigeria and apparently across the globe,” Bello tells the Huffington Post. “It’s all so surreal.”