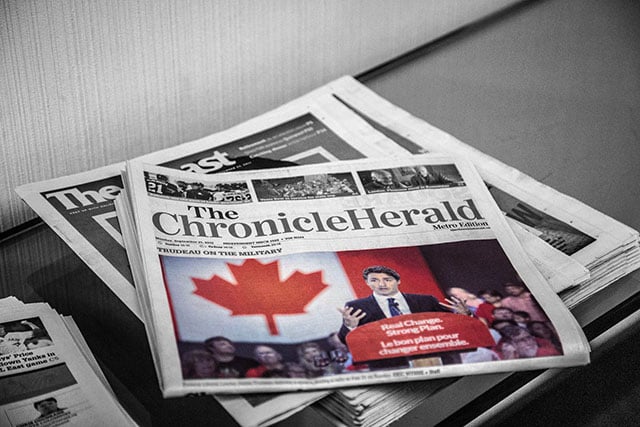 Photojournalism is having a bad year in Canada. There have been a number of major layoffs and murmurings of layoffs that have some people calling photojournalists “an endangered species.”

Photographer Jimmy Jeong, the chair of freelance photography for the News Photographers Association of Canada, reported last week that there were at least 13 photographers laid off across the country in just that day:

Sad day for Canadian photojournalism with lay-offs across the country. So far 6 photographers in Calgary and 7 in Edmonton let go.

There has also been a major labor dispute going on at The Chronicle Herald, the largest independently owned newspaper company in Canada, which has been saying that it plans to lay off its staff photographers.

The Halifax Typographical Union, which represents the paper’s newsroom, posted a “21,000-word response” to the paper on Twitter (“a photo is worth a thousand words”):

In letter to readers today, CH maintains it will lay off staff photographers. Our quick 21,000-word response #canlab pic.twitter.com/FBYT8NXilG

But here's our longer answer. If you could only keep one of your five senses, how many of you would pick sight? Yup, me too. #canlab So …

The 61 members of the union, including photographers, walked out on strike starting late last week:

Rick Conrad, who worked as a reporter and editor for the Chronicle Herald for nearly 23 years before taking a buyout package in December 2014, wrote a scathing letter to the paper’s owners over at The Coast.

“[Owner Mark] Lever wants to follow through on his threat a year ago to hack all editing jobs from the bargaining unit, in addition to other layoffs, including the paper’s award-winning photographers,” he writes. “That could be 18 more people out the door.”

“Despite the obstacles put in their way, the Herald’s reporters, photographers and editors still do excellent work, every day. But that work is now threatened by owners who don’t understand journalism and never really liked it.”

“So, take a bow, [co-owner] Sarah [Dennis] and Mark,” says Conrad. “You’ve done more in seven years to endanger exceptional journalism than any pissed-off politician or irate advertiser ever could.”

Image credits: Header illustration based on photo by Tony Webster