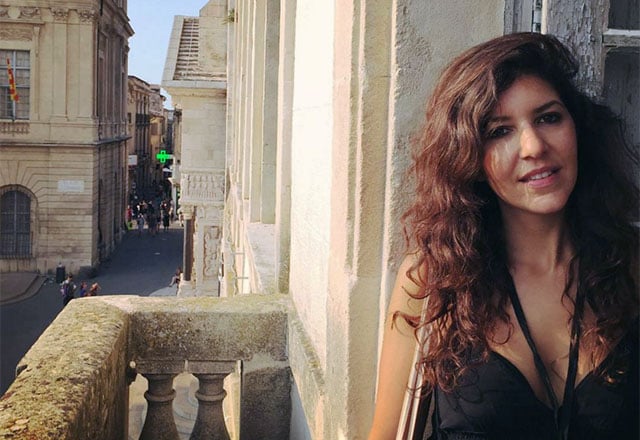 Amnesty International says that Alaoui was wounded by Al Qaeda terrorists during the Burkina Faso Siege while parked outside a cafe. She was shot in leg and thorax and was taken to a local hospital, where she had a heart attack and succumbed to her injuries Monday night.

Born in Paris in 1982, Alaoui studied photography at the City University of New York before starting her career in Morocco and Lebanon.

Alaoui’s recent photos focused on themes of migration, identity, and cultural diversity, and she worked to share social realities by combining fine art with documentary storytelling. She was in Burkina Faso on an assignment by Amnesty International to create a series of photos on women’s rights.

Getting my portrait taken by a Syrian boy in a tented refugee settlement in the Bekaa Valley, Lebanon.

"The Moroccans" on view at @mep_paris until January 17,2016 as part of the @photomondearabe Biennial of Photographers from the Contemporary Arab World #MEP #photomondearabe #Biennale #TheMoroccans #LeilaAlaoui #Photography #Exhibition #Paris

“She was an artist who shined,” they state. “She was fighting to give life to those forgotten by society, to homeless people, to migrants, deploying one weapon: photography.”

Industry, News
dies, killed, obituary, terrorist
Related Articles
Discussion
Trending Articles
Blood Moon, Aurora, and Milky Way Captured in One Photo
May 19, 2022
Wedding Photographer Tells Couple to Act Drunk, Gets Amazing Portraits
May 20, 2022
The Science Behind Why Watches are Set to 10:10 in Advertising Photos
May 17, 2022
Photographer Builds Giant Camera and Darkroom Bus
15 hours ago
You Are Still a Photographer, Even If No One Likes Your Images
May 21, 2022