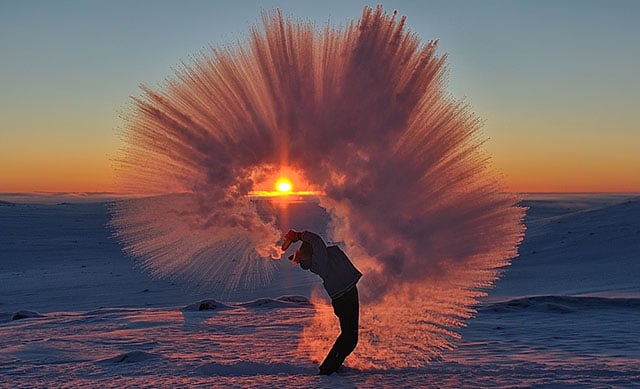 In cold enough temperatures, hot water tossed into the air instantly turns into ice. That’s what’s captured in this beautiful photo by photographer Michael Davies — it shows his friend Markus Siivola tossing hot tea from a thermos into the -40°C air.

Davies lives in the remote fly-in community of Pangnirtung in Canada’s High Arctic, where he has been shooting as a professional photographer for 10 years now. The temperature is generally between -25°C and -35°C.

A great deal of planning went into this shoot. “Between sunrise and sunset we have only 2.5 hours of light,” Davies tells PetaPixel, and not all of that light is ideal for photos.

At 1pm yesterday afternoon, Davies jumped onto a snowmobile and rode 45 minutes to the top of a nearby mountain with Siivola. It’s “where the light, which is almost always pink near the solstice, would hit the hills,” the photographer says.

They had multiple thermos filled with tea, and they began tossing and shooting. Davies closely followed the temperature, waited for calm wind, and carefully set up the shoot. For at least two of the shots, he managed to capture the sun in the center of the spray. 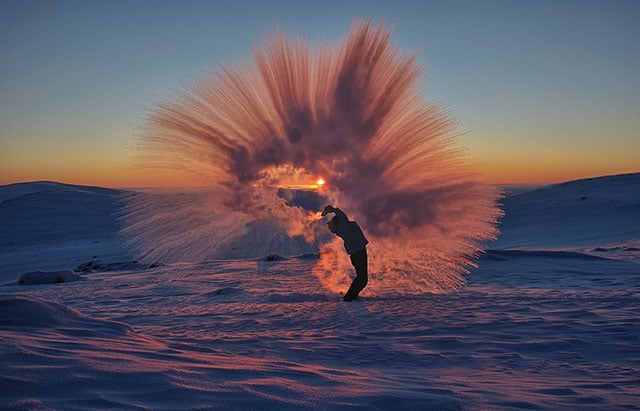 (via Michael H Davies via Colossal)

Image credits: Photographs by Michael Davies and used with permission

Long-Exposure Photos of the Historic SpaceX Rocket Launch and Landing