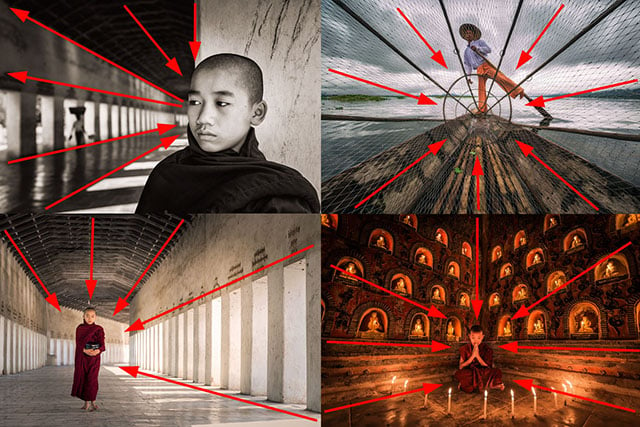 Composition can make or break a photograph. This is why it’s important to understand it and know how to effectively and creatively use it. In essence, composition describes the position of relative elements in a photograph. A strong composition will tend to have leading lines that draw attention to your subject: these can be horizontal, vertical or diagonal lines depending on the placement of your subject in the frame.

Have a look at the following images and see how I have composed each scene with the use of lines leading towards my subjects. I have drawn arrows in Photoshop on the photos to help share my vision when I was composing each shot. Hopefully those who aren’t familiar with composition will be able to visualise and understand it’s importance and how to go about composing the perfect shot. 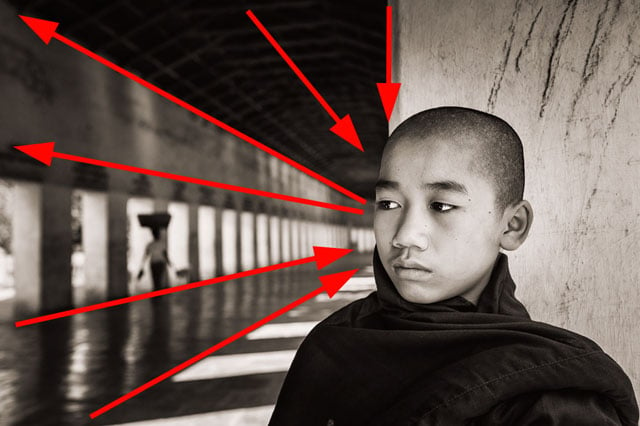 In this image, I wanted to lead the viewers eyes through the frame and down the long corridor while having the novice monk looking against the diagonal lines. The woman carrying the basket on her head in the background was walking with the line of the pathway which helped add direction. Notice the continuous pattern created by the pillars of the corridor and how they get smaller the further into the image. This helped add depth with the main focus on the monk in the foreground. 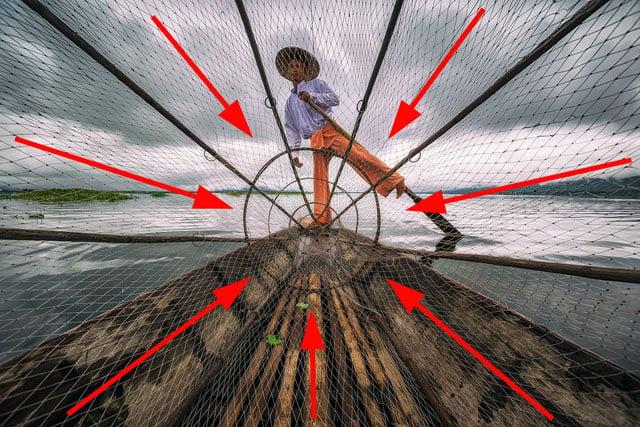 This was a fairly simple composition with my subject centred in my frame. I composed the shot so that the fishing net would draw diagonal lines inwards to the fisherman. The use of my wide angle lens helped distort the frame to add depth. 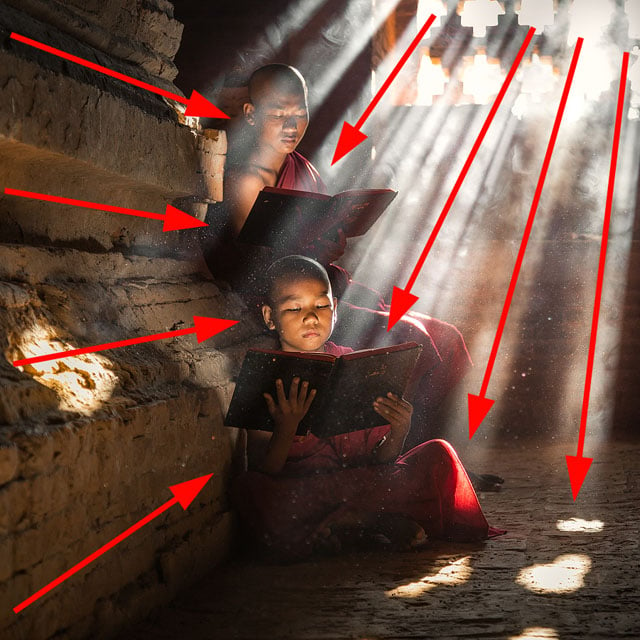 The focus was the novice monks but I also wanted to capture the ambient light and use the sun rays coming through the window as a source of direction. By composing the shot with the monks sitting beneath the beams of light I was able to draw focus downwards to their books while using the wall on the left to draw a line towards them. 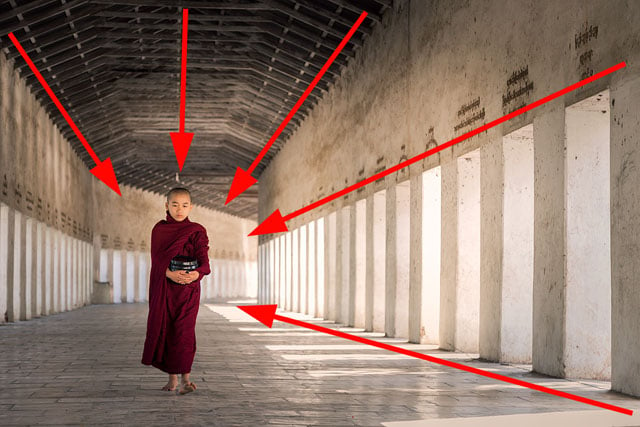 Here I composed my shot with the novice in the left third of the image and used the pillars on the right hand side to add depth into the shot. The lines along the pathway to the right add a leading line towards the monk while the ceiling draws the eye downwards with the monk looking down as he walked towards me. A very simple but strong composition taken with a wide angle lens. 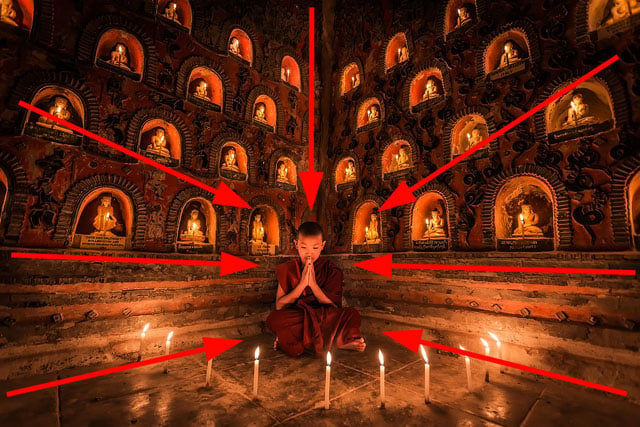 This is another centred composition with the monk sitting in the lower middle of frame. By shooting from a low angle I was able to create some distortion with the wide angle lens to point diagonal lines downwards towards the monk while the brickwork created focus horizontally to the middle of frame. The tiles on the floor also pointed lines inwards to make this a tight composition. 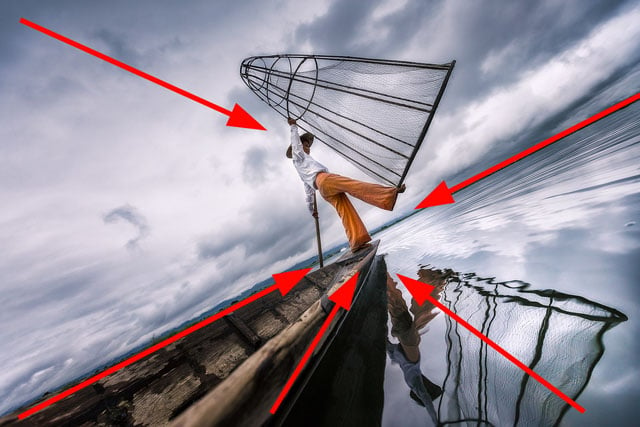 This was an unusual composition for me as I don’t really favour titled horizons, however it worked in this scenario by shooting from a low angle from the fisherman’s boat. As he held out his basket it created a reflection on the water which added direction pointing towards the centre of frame. The horizon runs from the bottom left and diagonally to the upper right creating a cross section composition. 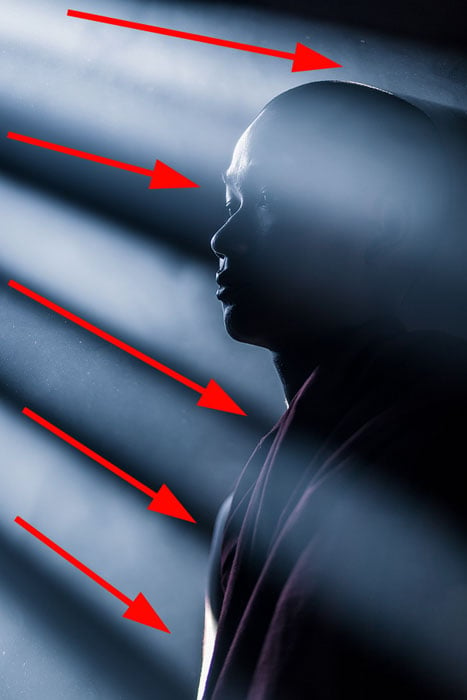 Another fairly straightforward composition. The light was spilling in from the left of frame so I composed the shot with the novice standing on the right of frame looking across towards the light. The angled light pointed towards the monk creating deep contrast which helped pull the shot together.

About the author: Drew Hopper is a fine art travel and landscape photographer based out of Australia. Captivated by the diversity of cultures, people and environment, Drew ventures far and wide to capture pictures that define his experiences with the vision that they will impact and inspire an audience in a way individual to each viewer. You can find more of his work and writing on his website and blog. This article was also published here.

This is How Camera Gear Was Stolen in 2015

Apple Has 800 People Working on the iPhone Camera