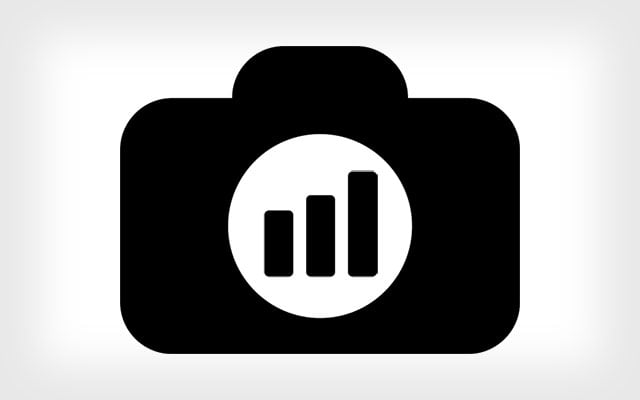 Are you improving at photography? We probably all ask ourselves the question, yet often we don’t know how to find the answer in any meaningful way. It is something that has nagged me for years, so I finally decided to find out if I really have been improving. Here is how I did it.

The challenge that set me on this path was when I decided to make a photo book of my Australian landscape shots. I do print the occasional photo for my walls at home, but creating a photo book forced me to find all my “keepers”. If my photography has improved, then my number of keepers will have increased. It was time for me to find out!

I found my keepers by simply going through my Australian landscape photo files in Photoshop’s Bridge software. As I went, I gave a 5 star rating (Ctrl-5 on PC or Cmd-5 on Mac) to each photo worthy of printing in a book. The free software, Google Picasa, would have suited this exercise very well if I didn’t have Photoshop.

Finding my keepers was surprisingly easy, as I already had a reasonable idea of my favorite images. To be thorough, I also mopped up ones I had forgotten, simply by filtering (Ctrl-F on PC, Cmd-F on Mac) for files I had processed previously (ie. TIFF or PSD files). Then I quickly scrolled through the filtered results to see what other images caught my eye.

This showed me the number of keepers each year, but it didn’t yet give me much clue as to whether I was really improving at landscape photography. To measure my improvement (or lack thereof), I needed to compare the number of keepers with the amount of landscape photography I did each year. Otherwise, I wouldn’t know if I had got lucky due to just shooting many times in one year compared to another year.

So I went through my hard disk again, year by year, and counted how many times I’d headed out specifically to shoot Australian landscape images. My photo shoots would last anywhere between a half hour to a half day, but they needed to be a dedicated photo shoot to count, rather than say an opportunistic sunset image taken in the back yard one evening. Interestingly, I discovered that all my “keepers” came from dedicated photo shoots; those opportunistic “oh look at the pretty sunset” snapshots have never resulted in anything yet.

The graph below shows the raw results 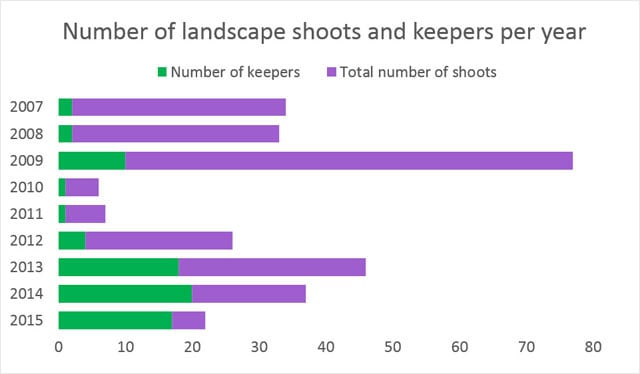 This graph was reasonably interesting, but it didn’t directly tell me how good (or bad) I was each year, or if I had really improved. To find this out, I needed to calculate the average percentage of keepers per landscape shooting experience. This would show me how many keepers I averaged per photo shoot, regardless of how many times I took photos each year.

Working out the percentage of photo shoots that resulted in a keeper was very easy. For each year, I divided “Number of keepers” by “Total number of shoots”, then I multiplied the answer by 100 to turn it into a percentage. This showed 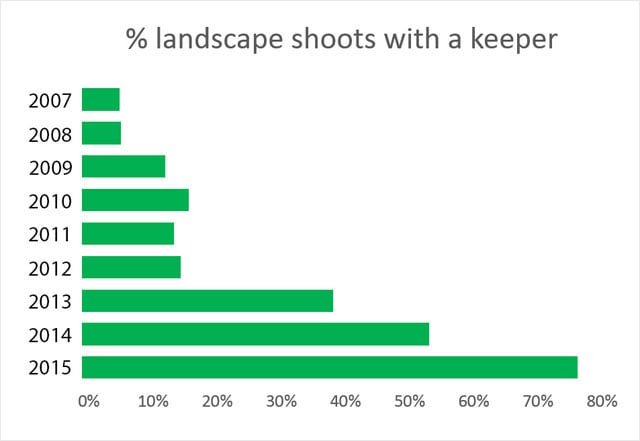 I was very excited when I first saw this graph. It showed I have definitely improved!

Why did I improve?

The obvious next question is: why the improvement? We’re told “practice makes perfect” – did I improve simply because I practiced landscape photography over time?

Was it because of practice?

Looking at the first graph, I would have to say that practice did not, in itself, drive very much improvement. I went out shooting landscapes 34 times in 2007, yet in 2008 I obtained no more keepers per shoot than I did when I started out in 2007. And 2009 was a massive year with 77 shoots, yet my averages barely improved in 2010 compared to 2009. My 2012 averages were almost the same as 2009, even though I had three years additional experience under my belt.

So, simply going out and shooting helped a little, but it didn’t improve my photography anywhere near as much as I would have anticipated.

Was it because of new gear?

What about gear? It is said that new gear doesn’t improve our photography, but maybe that’s wrong? To find out, here is the “% landscape shoots with a keeper” graph, split into half-year periods and overlaid with my main landscape photography purchasing milestones: 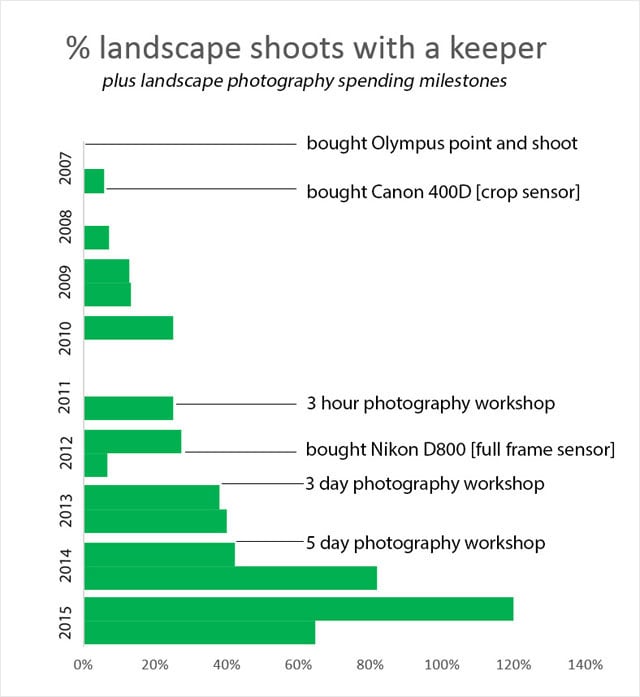 It appears that buying a new camera ruined my landscape photography for 6 months afterwards each time! The upgrade to the Canon 400D (ie. Rebel XTi) DSLR in late 2007 resulted in no keepers in the first half of 2008. The upgrade to the full frame Nikon D800 DSLR in mid-2012 also resulted in almost no keepers for the next 6 months. So, buying new gear certainly didn’t make me a better photographer.

The reason that new gear didn’t immediately help me is because my camera upgrades required a large shift in my approach to shooting, to take advantage of the new technology. I had no trouble figuring out what the knobs and buttons did, but creatively, the new thought processes took quite some getting used to. The difficulty of the jump to the Nikon D800 particularly surprised me at the time. The way the D800 amplified all my faults and bad habits in its 36 megapixel glory felt like I was riding a bucking bronco after trotting around on a meek pony. I imagine I would experience the same in future if I ever jumped up to using a medium or large format camera.

Workshops helped me improve the most

The standout milestones that most improved my photography were definitely the photography workshops, run by experienced, professional landscape photographers.

In 2011, an afternoon workshop in Perth with Mark Gray gave me some excellent new pointers, which pulled me out of the slump I’d obviously experienced for over a year previously (but didn’t fully realise at the time). Although I have always read voraciously about photography, shooting with Mark’s direct guidance was invaluable to quickly help me learn how to practically create better images.

In January 2013, I attended the famous 3 day Bunker Bay workshop run by Christian Fletcher and Nick Rains. The highlight of this workshop was the incredible amount of learning achieved through their hands-on approach to shooting and post-processing. I consolidated this knowledge as I shot and processed over the next few months, after which my number of keepers rose substantially.

Then, in January 2014, I attended a 5 day workshop in NSW, Australia with Jay and Varina Patel. I learnt so much by shooting under the guidance of Jay and Varina; things I could never have learned just by reading about it. Their teaching seemed to take my photography to the next level and I have seen a dramatic jump in the number of keepers since.

Interestingly, my most recent few months have seen a slight drop in the average number of keepers per shoot. I wonder if this is because I tend to reject my shots upon immediate inspection, and only after time do they grow on me. Time will tell.

Looking at my results, I discovered that the biggest key to improving my photography was to attend workshops run by experienced professional photographers. Attending workshops was much more effective than just going out to shoot a lot, and certainly more effective than buying better gear. Obviously, improvement can only come with practice also, but it seems that, for me at least, making landscape photos with some solid lessons under my belt gained me the most improvement.

So, how many keepers do you make? Are you ready to find out? And what best helps you improve at photography?

About the author: Simon is an enthusiastic hobbyist photographer based in Victoria, Australia, who also likes discovering the truth about things. He loves hiking and camping in the wilderness and the challenge of learning to communicate through the art of photography. Simon aims to create images that affect people emotionally. You can find him on Facebook here. This article was also published at F Stop Lounge.

Image credits: Photographs and charts by Simon Patterson and used with permission

Ep. 30: Does Acting Like a Jerk Reflect on Other Photographers? – and more