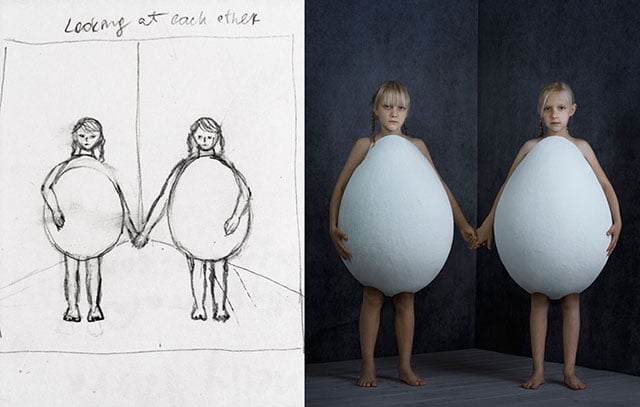 I recently did a personal art photography project titled, “You Are My Twin.” It’s a little psychological study of twins’ relationship shown with the help of metaphors. I’ve always been curious how it feels to have a twin. Often the way people view twins is as if they are the same, whereas there are twins who choose completely different paths in life. Yet, they always feel strongly connected to each other.

I wanted to show emotions the twins may have with the use props and sets to tell a story of twins’ relationships, so I sketched out my ideas and brought them to a set designer. 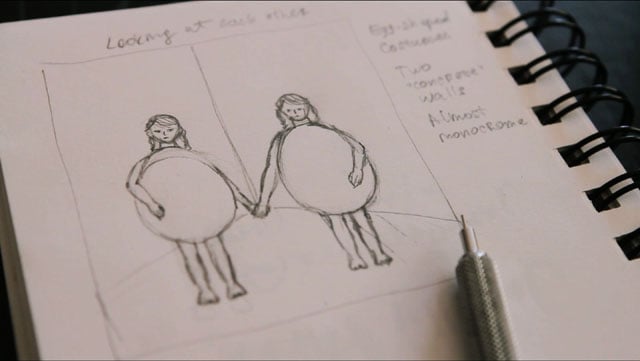 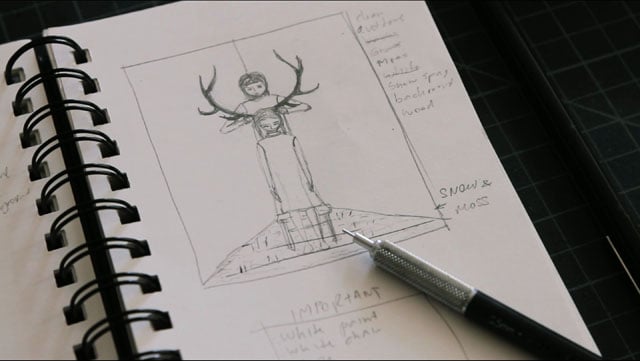 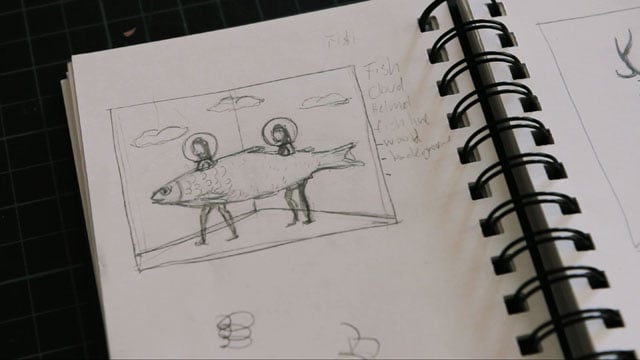 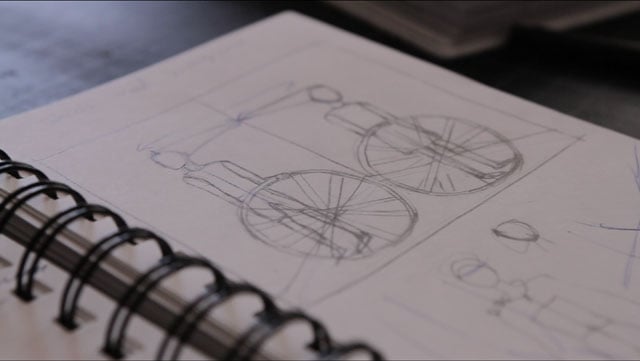 From sketches to the point when I was ready to shoot, it took about three weeks. The props were fish, two giant eggs, antlers and a pair of white wheels, all made by the talented set designer Espen Øydvin. 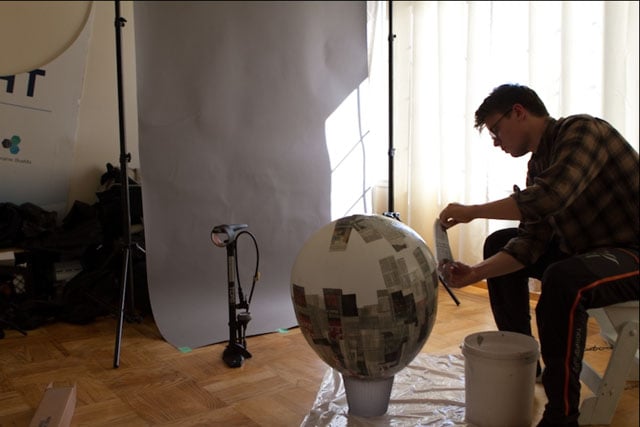 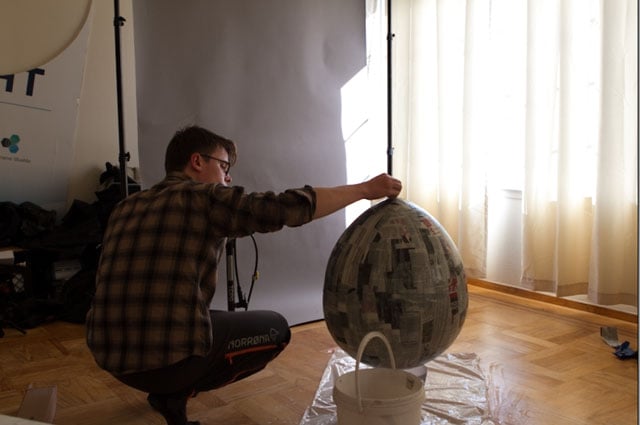 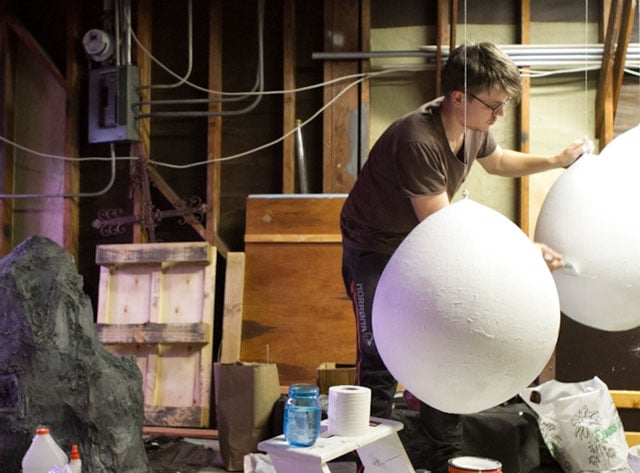 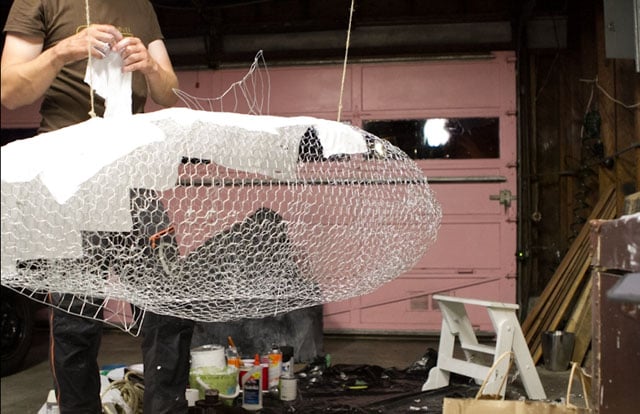 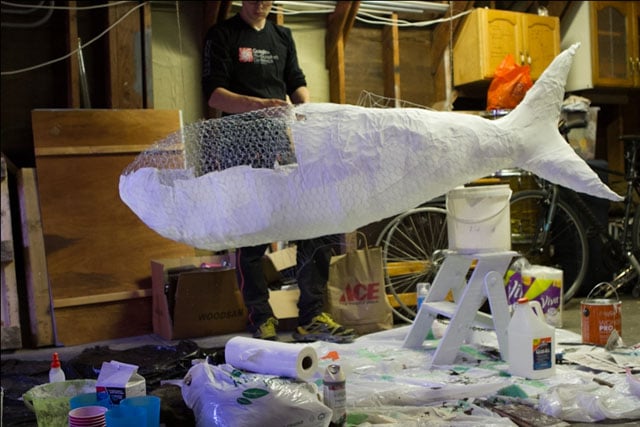 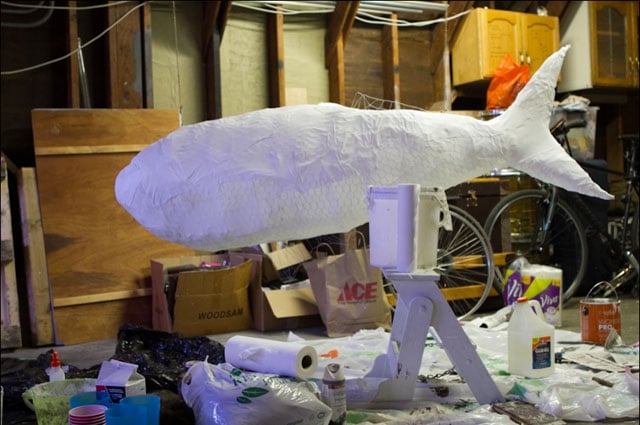 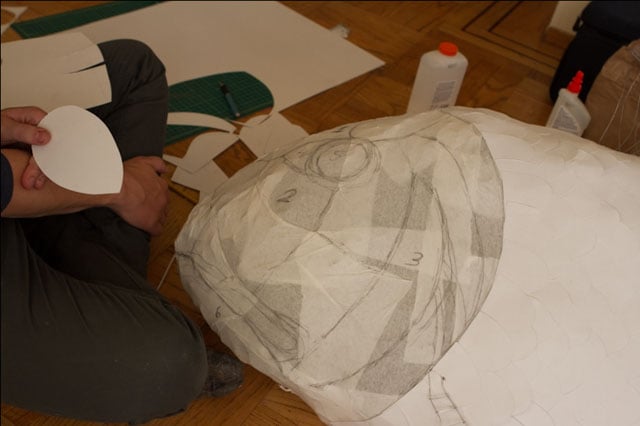 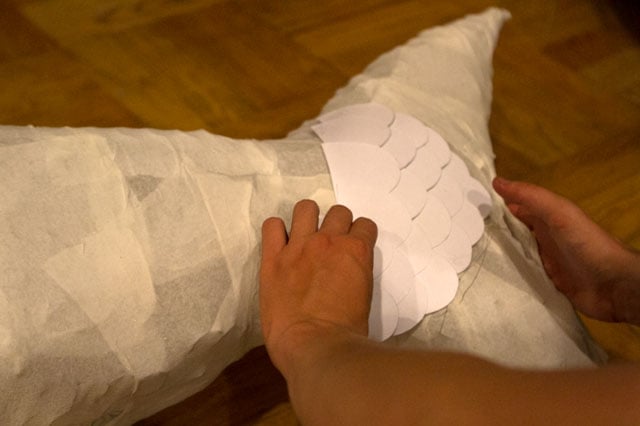 In one studio day we built two walls and staged all four sets in between them. Thus, I was able to create all four images in one day. The girls had a lot of fun on set, playing with props, with each other and with our set designer. 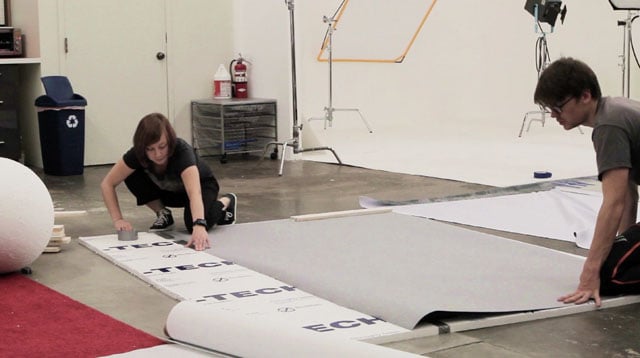 The lighting set up was fairly simple: two diffusing silks stacked one on top of the other, creating a surface of approximately 4×8 feet with a strobe behind it on camera right. On the left side there was one 4×4 foot silk with a strobe behind it. And one more light source, a Broncolor Boxlite 12×16′, was in front of the models on the left to give a bit more fill to the faces. The idea behind using the silks was to get the softest light possible. 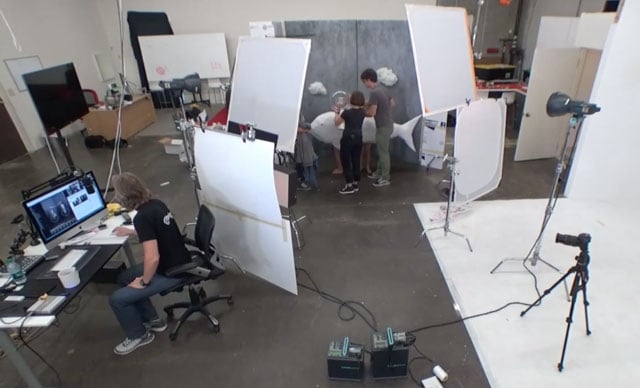 I shot these with Hasselblad H3D digital camera, 120mm lens. After processing Hasselblad raw files in Lightroom and applying global adjustments, it took me about 25 hours to do retouching on all four pictures in Photoshop. I had to darken the backgrounds, because I felt that it would reflect the surrealistic concept and the overall mood better. 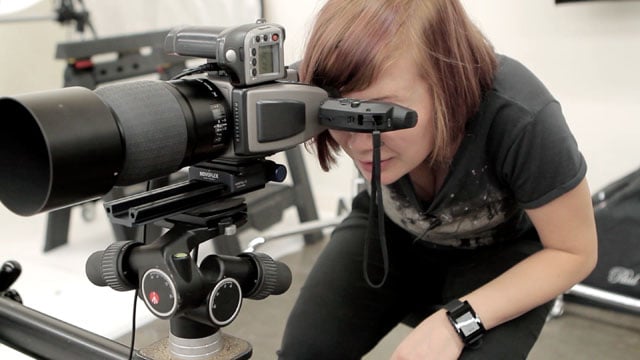 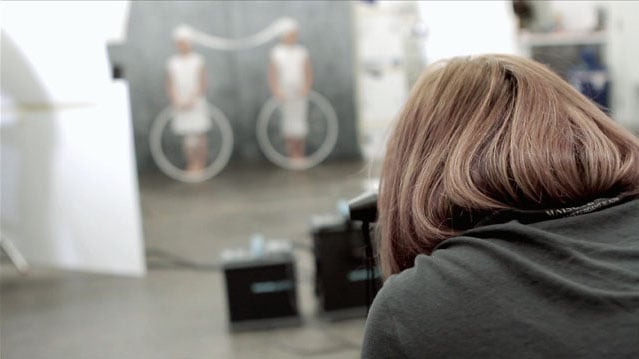 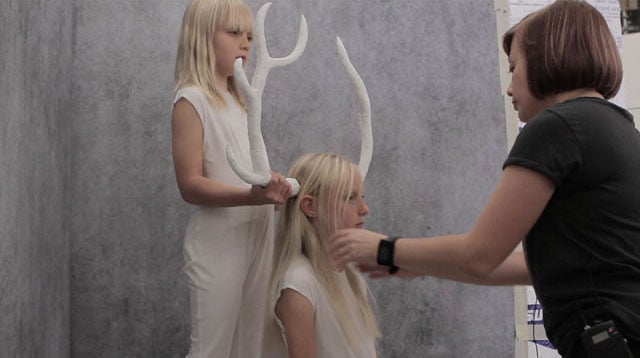 In the Fish image I had to do a composite, because we had only one helmet for the girls and I additionally shot it by itself with a specific lighting to highlight its shape.

Here are the resulting photographs: 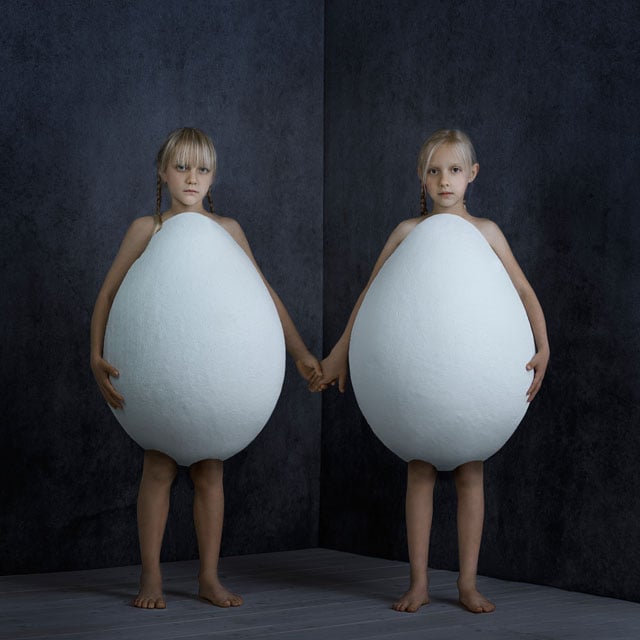 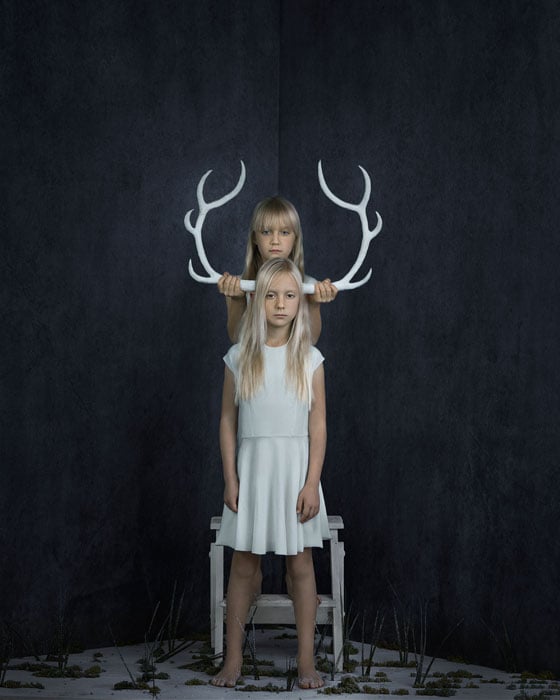 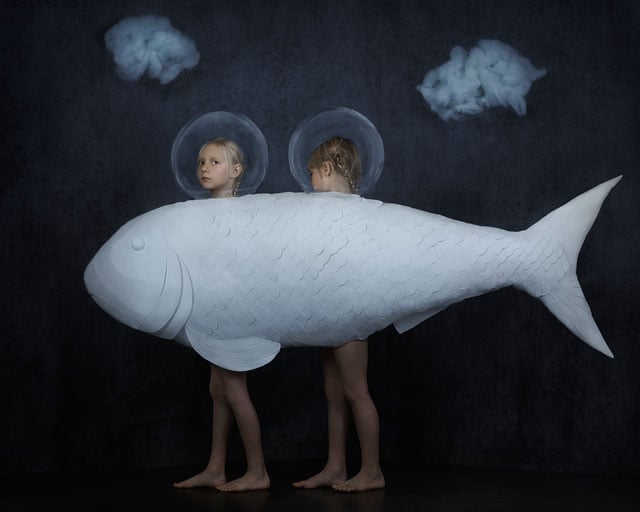 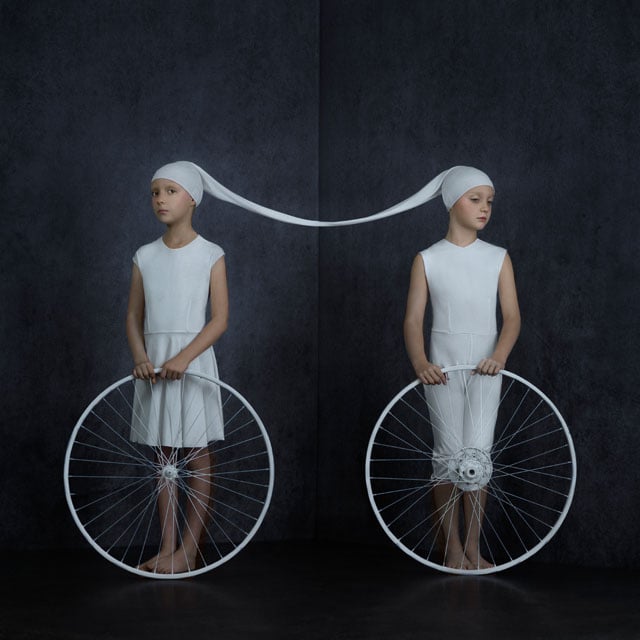 Here’s a behind-the-scenes video showing how this project was done:

About the author: Krisitna Varaksina is a photographer based in New York City. She has won numerous photography awards and has been published in a number of prominent magazines in the United States, including Communication Arts, PDN, and Digital Photo Magazine. Visit her website here.

Credits: The studio facilities and all possible help at the shoot was kindly offered by Photigy Playground and Alex Koloskov. Set design by Espen Gjertzen Øydvin. Models were Lilya and Sonya Koloskov.

An Ultimate Photographer’s Handbook, Inspired by a 100-Year-Old Find