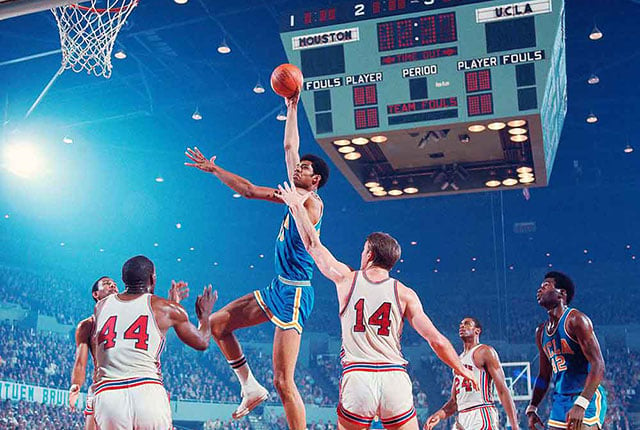 Rich Clarkson’s photo of Kareem Abdul-Jabbar, then named Lew Alcindor, in the 1968 NCAA Men’s National Basketball Final Four semifinal game in Los Angeles is a masterpiece of composition, timing and exposure. The square format is the result of shooting the game action with a Hasselblad – a practice that continued into the early 2000s. But that isn’t what makes this photo historically interesting.

The blue haze that adds such a wonderful ambience to the arena is caused by cigarette smoke. The California Indoor Clean Air Act of 1976 was one of many regulations that started to clamp down on public smoking, and thus, we traded better light for better health. The same blue haze is evident in many historical boxing photos, like the ones made by Neil Leifer.

In 2006, then owner of the Los Angeles Lakers, Dr. Jerry Buss, pined for a more nostalgic look in the Staples Center. Thus, the lighting was focused onto the court with very little spill onto the arena seats. USA Today’s Robert Hanashiro captured the scene inside Staples center.

And a similar scene inside UCLA’s Pauley Pavilion.

The look is more dramatic than a fully illuminated areana, but certainly still lacks the panache of the smoke-filled past.