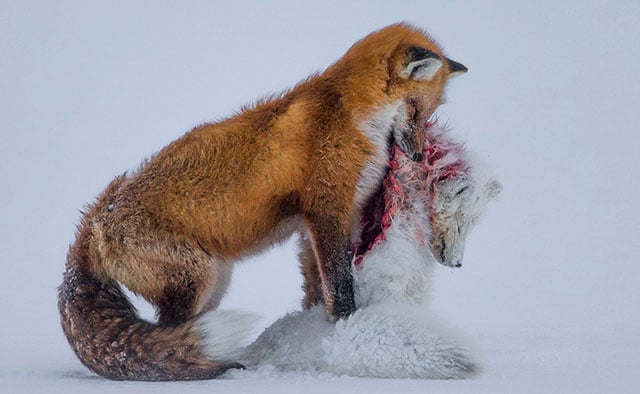 Canada amateur photographer Don Gutoski has been crowned Wildlife Photographer of the Year 2015 for the remarkable photo above, titled “A Tale of Two Foxes.” It shows a red fox standing with the carcass of a white fox in its mouth.


The Natural History Museum, which co-owns the prestigious competition with BBC Wildlife, announced the award on Monday.

Don works as an accident and emergency doctor, and when he’s not saving lives, he’s often out with his camera on his 40-hectare piece of land. This particular photo was captured at Wapusk National Park in Cape Churchill, Manitoba, Canada. Here’s the story behind it, as found in the competition’s gallery:

From a distance, Don could see that the red fox was chasing something across the snow. As he got closer, he realised the prey, now dead, was an Arctic fox. For three hours in temperatures of -30 degrees Centigrade Don stayed at the scene, until the red fox, finally sated, picked up the eviscerated carcass and dragged it away to store for later. In the Canadian tundra, global warming is extending the range of red foxes northwards, where they increasingly cross paths with their smaller relatives, the Arctic fox. For Arctic foxes, red foxes now represent not just their main competitor – both hunt small animals such as lemmings – but also their main predator. Few actual kills by red foxes have been witnessed so far, but it is likely that conflicts between the two mammals will become more common.

“What might simply be a straightforward interaction between predator and prey struck the jury as a stark example of climate change, with red foxes encroaching on Arctic fox territory,” writes competition jury member Kathy Moran. “The bottom line is, this image works on multiple levels. It is graphic, it captures behaviour and it is one of the strongest single storytelling photographs I have seen.”

The photo was selected for the grand prize out of over 42,000 entries received from 96 countries around the world. It, along with other winning photos, will be exhibited at the Natural History Museum in London from October 16th, 2015, through April 10, 2016.

Image credits: Photograph by Don Gutoski/Wildlife Photographer of the Year 2015