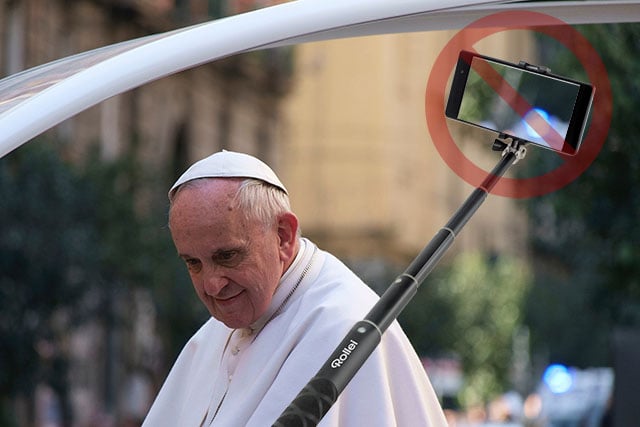 On September 23rd, Pope Francis will be visiting Washington D.C. and rolling through the streets during a Papal Parade in his Popemobile. The Secret Service is working hard on security preparations leading up to the visit, and yesterday it published security policies for law enforcement to enforce.

Among the banned items at the parade are firearms, explosives, drones, and selfies sticks.


That’s right — the camera accessory that so many people love and love to hate is banned alongside “weapons of any kind.” Here’s the full document that was put out by the Secret Service:

The plans were developed by “a partnership of local, state and federal law enforcement and public safety agencies,” and “every effort has been made to minimize the impact of these safety measures,” the Secret Service writes.

If you do decide to attend the parade, you’ll be subject to a thorough security screening before entering the route, and if a selfie stick is discovered on you, it’ll be confiscated and you won’t get it back.

(via Secret Service via Digital Trends)

Update: Looks like the FAA is also imposing a “no drone” policy over Washington D.C., New York, and Philadelphia during the papal visit between September 22nd and 27th:

Image credits: Header illustration based on photo by Raffaele Esposito