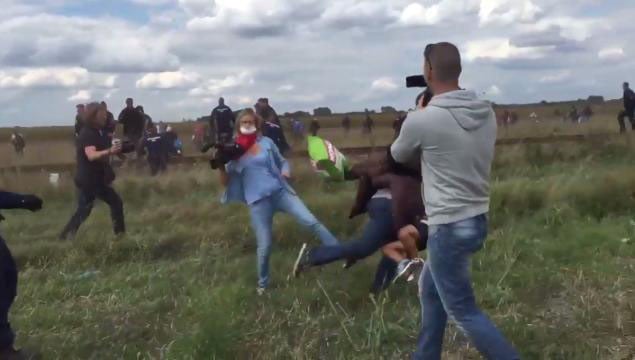 A Hungarian journalist and camerawoman has been fired after photos and videos of her tripping and kicking fleeing refugees spread far and wide on the Internet.

Petra Laszlo, a reporter for the Hungarian news channel N1TV, was using a camera to capture footage of migrants fleeing from police at a relocation camp in Roszke, Hungary. But that’s not all she was doing: other cameras on the scene captured her kicking and tripping migrants as they ran past her — both adults and their young children.

One clip shows Laszlo sticking out her leg to trip a man who was carrying a bag of belongings and his child in his arms, sending both to the ground.

The most shameful moment a journalist has done to #refugees during this refugee wave…#refugeeswelcome pic.twitter.com/FGAIsQy6k6

Footage captured by Laszlo was reportedly edited by N1TV to conceal the fact that Laszlo had played a role in sending migrants sprawling to the ground.

N1TV’s channel aligns itself with the Jobbik party in Hungary, which is anti-immigration, so it’s unclear whether Laszlo was attacking migrants for “better” and more “exciting” footage or whether her actions were politically motivated — or both.

Her employer has since fired her, saying that Laszlo had “behaved in an unacceptable manner.” The move comes less than a day after images and clips of the journalist began going viral on social networks, leading to widespread outrage and condemnation. A new “Petra Laszlo shame wall” on Facebook has already attracted over 16,000 “Likes.”

The Guardian also reports that Laszlo may soon face charges of violence against a member of the community, which is punishable by up to 5 years in jail.

A Composite Photo of the International Space Station Transiting the Sun