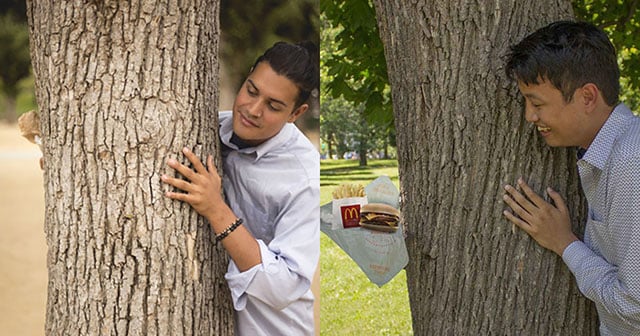 Back in July, writer David Sikorski and photographer Kristina Bakrevski gained quite a bit of attention online after publishing engagement photos of Sikorski and his one true love: the burrito.

The idea was so popular and unusual that McDonald’s decided to steal it for a new advertising campaign.

AdWeek reports that the new ads promoted a $2.50 double cheeseburger combo deal, and were strikingly similar to the photos created by Sikorski and Bakrevski.

Here are some side-by-side comparisons of the original series and the new advertisements:

“The photos used by McDonald’s are not a spinoff or a take on it,” Sikorski tells AdWeek, “but an exact duplicate from the wardrobe, the positions and the concept. Neither myself, my photographer or the licensing company were approached for permission.”

McDonald’s is apologizing for what happened. “This shouldn’t have happened, and, with our agency partner, we’re working to find out how it did,” the company tells AdWeek. “We’re reaching out to David Sikorski and Kristina Bakrevski. We apologize to them, their fans and ours.”

P.S. If you missed the original series the first time around, you can view the photos here.

7 Things I Learned from My Portfolio Review

Idea: Use a Car as a DIY Smoke Machine Outdoors