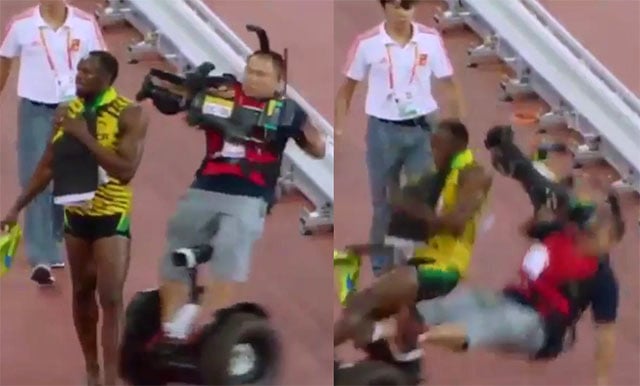 World champion sprinter Usain Bolt had a scary encounter with a clumsy cameraman at the World Athletics Championships in Beijing today. After winning the 200m race, Bolt was upended after the cameraman lost control of the Segway he was riding.

The incident happened during Bolt’s victory lap around Bird’s Nest stadium, where Bolt won 3 gold medals in 2008. As the cameraman rolled alongside the sprinter with a camera in hand, the Segway ran up onto a metal camera railing, changed direction, and zoomed right under Bolt’s legs.

Here’s what happened from a few different camera angles:

Bolt limped a bit after getting up, but he soon continued on his victory lap after checking to make sure the cameraman was okay.

The 29-year-old running is arguably the most popular sprinter in the world right now, so the cameraman is lucky that his attempt at a close-up shot didn’t leave Bolt with any serious and career-threatening injuries.

(via ESPN and Photography Bay)

The Future of Photography