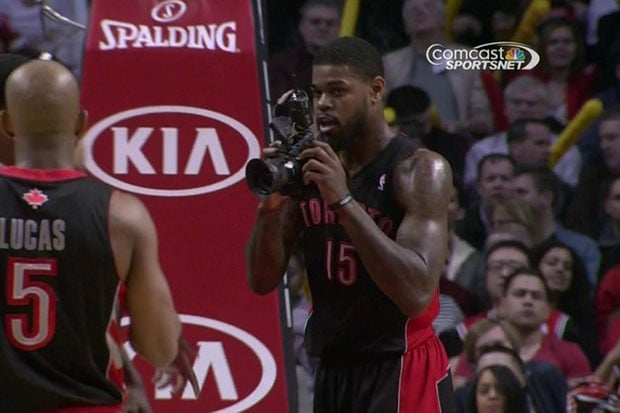 Remember how Usain Bolt grabbed a photographer’s DSLR last year during the London Olympics and started snapping photos of his fellow athletes? A similar thing happened today in an NBA basketball game between the Chicago Bulls and Toronto Raptors.


At one point in the game, as play was under way, Bulls power forward Carlos Boozer accidentally kicked a photographer’s DSLR (with a wireless trigger attached to the hotshoe) onto the court.

It was at the same time Raptors player Terrence Ross drove to the basket and got fouled in the process of making a shot. Seeing the professional camera lying on the ground, Raptors power forward Amir Johnson decided he would use it to celebrate his teammate’s basket.

He picked it up and snapped a few photographs of his teammates before handing it off to a man on the side of the court.

Here’s a short clip showing the incident as it happened on TV:

Usain Bolt’s photographs were published shortly after his camera hijacking incident, and those images went viral across the Web. It’ll be interesting to see whether any of Johnson’s photographs are published (leave a comment if you see them anywhere!).