In the summer time at Scott Base in Antarctica, there are 4 months in which the Sun never sets. From the latter part of October through the latter part of February, the Sun stays above the horizon line, giving each day 24 hours of sunlight.

New Zealand filmmaker Anthony Powell, the man behind the award-winning film Antarctica: A Year on Ice, created this 2-minute time-lapse video by pointing a camera at the Sun and tracking it over a full day of daylight.

“I used a modified heavy duty telescope tracking head to avoid any camera wobbles due to the incessant wind, then put my watch in the foreground via a mini magic arm,” Powell tells PetaPixel. “I could just manage enough depth of field at f22 to get both the watch and background in focus.”

He shot one photo every 1-minute-and-1-second in order to have the second hand tick a second every frame (when actually about a minute has passed). “Thinking back, I probably should have made it 1 minute and two seconds so that the second hand would be moving faster than the minute hand,” Powell says. 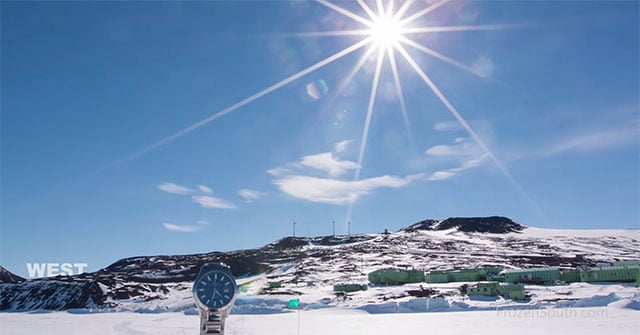 The camera rig was powered by a solar panel plus two small lead-acid batteries.

Powell’s Antarctica: A Year on Ice has been featured on Discovery, National Geographic, and BBC’s Frozen Planet. It has also won numerous awards at film festivals around the world.

“I’m starting to release some free online clips aimed at being both entertaining and suitable for educational outreach for use in schools etc,” Powell says. You can find out more about the full film here.

Image credits: Video and still frame by Anthony Powell and used with permission

The Fastest CF and SD Cards for the Canon 5DS: Lexar

How to Take a Self-Portrait with a Shooting Star