If you thought photographing a NASCAR race from up close was wild, check out this video. Captured by photographer Marcel Langer at Gatebil Rudskogen, Norway’s top drift racing event, the video shows how close photographers get to the cars as they screech by on the track.

The racecars kick up huge amounts of dirt and debris right into the faces of the photographers, who instinctively jerk their bodies away at the last moments before the blast hits them: 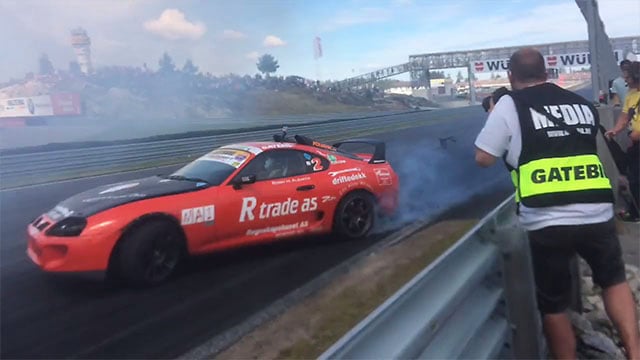 It seems that the photographers and spectators are risking serious injury or death by standing where they are: only a guardrail separates them from the cars, and if an out-of-control car were to plow into that railing, we’re guessing that the outcome could be very ugly.

(via Marcel Langer via Road & Track)

P.S. You can find a gallery of Langer’s photos from this race in this Flickr album.

Behind the Scenes: Shooting Car Ads for Toyota with Photographer Dave Hill