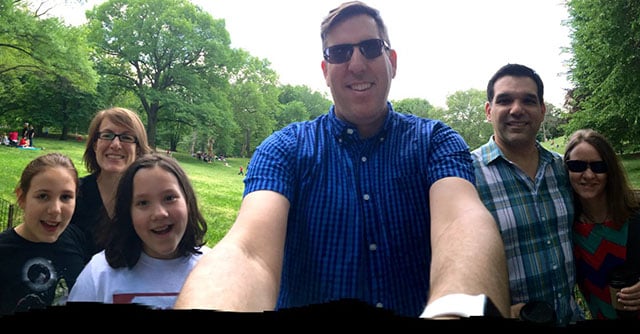 A few weeks ago, Colin Devroe, a friend from Twitter, introduced me to the concept of a panoselfie when he created a Flickr group for it and tweeted at me.

After seeing the first couple panoselfies Colin made, I became immediately enamored with the idea (The Next Web wrote an article about Colin and the panoselfie as well). They’re fun and look great, letting you fit both large groups and giant landscapes into a photo. Colin gave no instructions, but after a bit of trial and error I realized how easy they are to make, so I made a bunch more. But don’t take my word for it, try making some yourself today.

It’s simple really. Set your stock iPhone camera app to panorama mode. Hold your arms out straight away from you as far as possible. Turn the phone 90º to the right so you’re staring at the side of your phone, hit the camera button to start the shot, then smoothly spin your phone clockwise 180º towards you until the phone finishes, pointing at your left shoulder. Try and tell everyone to stay still while you do it to prevent glitches.

Here’s what it looked like while I took it.

Another example, from the top of the Empire State Building at sunset.

From the other side, it looked like this while I captured it.

In the last couple weeks, I’ve gone kind of nuts with it. Here are a slew of my favorites.

What is amazing is that phone software and hardware has gotten so good that it can pull this off. Watch the videos above and you’ll see I spin my phone pretty quickly, my arms are bouncing around a bit, and the camera automatically stitches everything together fairly smoothly. You might see some black artifacts from bouncing up and down during the spin, but I’m genuinely impressed at the quality of output from this silly new thing. Of course, you can crop the final images narrower to show just the subjects or leave them raw and wide, it’s up to you.

I can’t put my finger on exactly why I suddenly love this form of photography so much. I think these two tweets capture a couple great reasons.

@hchamp @mathowie I'm a big fan. Makes a selfie a little less about the self thing. https://t.co/UoKkIaArxJ

@mathowie looks like you are reaching out to hug the world 😊

Both good points. While it is a selfie, adding in more of the environment around you de-emphasizes the narcissism of a classic selfie. The arms out looking like a hug is a nice side effect. Another couple of nice side effects are being able to fit huge groups of people in a photo without skipping the photographer and including more of the beautiful landscape into a shot. The panoselfie also negates the need for a selfie stick.

It’s useful too; right now Twitter, Facebook, and Flickr not only ask for a profile photo but also very wide backdrop photos for your profile headers. You know what makes a great image for that? Panoselfies.

They’ve been a fun way to remember my trip to New York City. I hope to someday get one of my family visiting the Grand Canyon in one. I wish I did this when I visited the Colosseum in Rome. Now that the initial novelty is gone, I will take less of these in the future, but save them for great landscapes or groups of friends getting together where they work best.

There’s Always a But

About the only downside is viewing panoramic photos is a pain on some devices. They generally look best on a desktop with a big monitor or a decent sized laptop. On phones, double-tapping them to increase the size and panning left and right is fun but a bit of work. Sometimes you’re stuck with tiny very wide photos you can’t expand however. Surprisingly, Flickr is one of the best places to view them since their redesign.

Finally, another nice surprise is the iPhone auto-tags all panoramic photos into an automated album, and after you start shooting these kinds of images you’ll have one-tap access to a fun gallery that looks something like this. 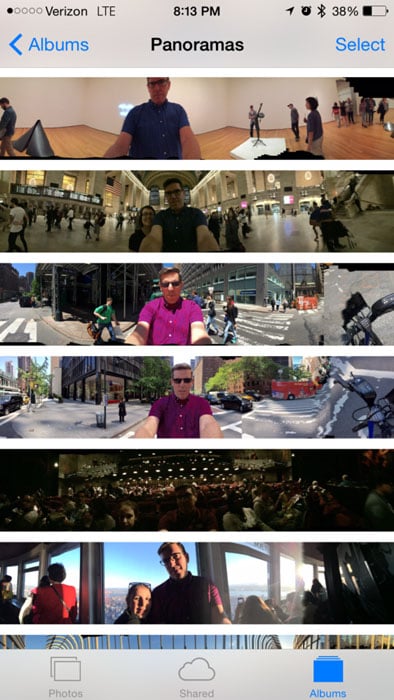 About the author: Matthew Haughey is a programmer and web designer who’s best known for being the founder of the popular website MetaFilter. He’s a huge photography nerd as well. You can visit his personal website here. This article also appeared here.