Here’s a fantastic 6-minute TED Talk by photographer Anand Varma, who recently became involved in the preservation of bees after being asked by National Geographic to shoot a story on them.

As part of the work, Varma shot a fascinating time-lapse that shows the first 21 days of a bee’s life in just 60 seconds. Seen between 2 and 3 minutes in the video above, the video offers a closeup look at how bees grow from tiny larvae into mature honeybees inside their brood cells. 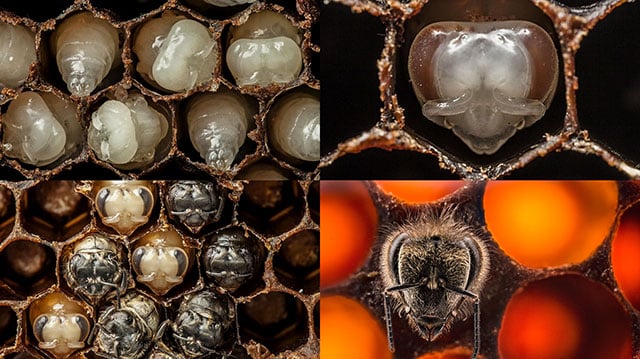 National Geographic’s PROOF has published an article on this project that shares some behind-the-scenes info on how the photos were shot:

[Varma] set a small piece of brood comb in the incubator, and rigged up a contraption that would allow his camera to photograph the same cell for a week at a time. “I couldn’t really photograph one bee for the whole 21 days of its life cycle, so I broke it up and I tried to capture each transformation that happens,” he says.

As with any experiment, there were challenges. The first few tries, the humidity levels weren’t right. And then the first time-lapse he got revealed an ant infestation—all he had were photos of ants eating bee larvae. “Once it started to work, I was like, ‘Oh my god, this is going to be the coolest thing ever if I can show every part of this process.’”

After dozens of tries over half a year, Varma managed to capture enough photos for the beautiful time-lapse shared above. The photos have also been published in the May 2015 issue of National Geographic magazine.

(via TED via Pop Photo)

Hacking a Vintage 1950s Lens for a Modern Mirrorless Camera

How to Turn a Photo Into a Painting with Photoshop