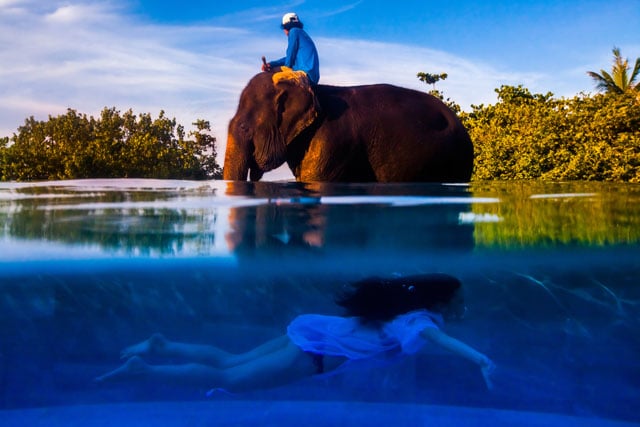 I made this photograph a while back for a private client in Phuket, Thailand, who owned a stunning vacation home that she designed herself. She was drawn to my editorial style in my commercial work and she wanted me to take that approach for a series of lifestyle images at her home.

We spoke on the phone to prepare for the shoot, and she threw out the idea of hiring an elephant. I thought she was joking at first but when I realized she wasn’t, I jumped at the opportunity, I mean… how often do you get to have an elephant as a model at your disposal? (More on disposal later).

I had one day with a model and one hour with our elephant model. The client mentioned she had the largest private pool in Asia and she wanted to highlight that. I’m not sure if that’s fact, but the pool was huge. She wanted to feature it and she wanted a Thai element to the pictures, hence the elephant. 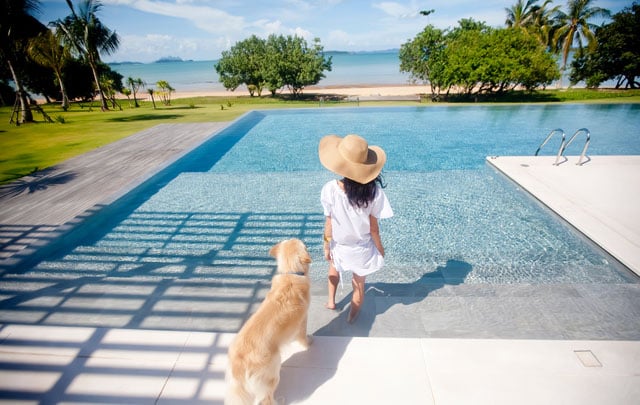 My background at the time was in documentary and editorial photography, so I didn’t like to plan much. I work on the fly and with natural light — following light and working in the moment is how I usually get my best images.

Well, the elephant showed up and I worked at a frantic pace because I only had an hour. We wandered around the property with our South African model and the giant elephant, and I shot as many frames as I could. 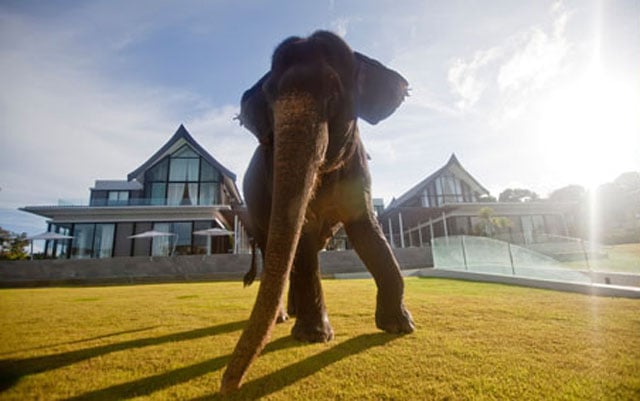 Earlier in the day I was photographing the model in the pool with my DigiPac underwater bag and I was getting some cool half-submerged shots, so I had an idea to recreate the model swimming underwater with the elephant and the mahout at the edge of the pool.

The model did underwater laps for me and we got the elephant to stay still by the edge of the pool as long as we could. This shot was coming out really cool and I was happy with what I had. I had about 20 minutes left with the elephant and I intended to use every second.

I then spoke to the client about having the elephant inside the pool with the model. She paused for a moment and said “why not?”. She asked the mahout if the elephant would relieve himself in the pool and he confidently said “no, it’s fine.” I didn’t believe him at all but I didn’t care, I wanted that majestic elephant in the pool. The pool had a giant staircase so it was easy to get him in the water. 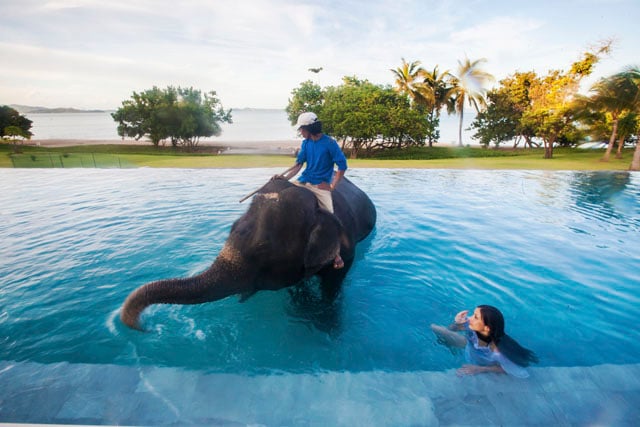 Working with an underwater bag is tricky; you have to take hundreds of shots just to get it right. They fog up easy and they are just hard to operate but they are exponentially cheaper than a full on underwater housing.

I got some cool stuff but I couldn’t tell if I had it in focus so I jumped out of the pool to check. I opened up the bag way too quickly and a bunch of water hit my Canon 5D but it was still working and the images were fine. As I was scrolling through the images the elephant, well, the elephant relieved himself — a number two to be precise.

The model wanted out, but I talked her into staying in for one last shot and I jumped back into the poop-infested pool and fired away. I was out of poop range but she wasn’t — the model was a good sport. The next morning I had to come back to the property for a few more shots and I had a chuckle when I saw a group of pool cleaning guys scratching their heads at how this happened.

My half-submerged pictures won best image for Travel Photographer of The Year (TPOTY) and we now use the images as our brand hero shot for my commercial photography business.

Ever since the image won that contest, I’ve read horrible things online bashing me saying I created the whole image in Photoshop. At first I resented the comments because I literally swam in poop to get that series of shots. The only digital retouching for these images was color balance, nothing was removed or added, not even poop removal.

Even though I used to get annoyed at the image being called a fake, I now kind of like it. I like the idea of people scratching their heads like the pool cleaners when they see this picture, wondering how it came to be.

About the author: Justin Mott is photographer and founder of Mott Visuals, a boutique photography and film production studio based in Thailand and Vietnam serving all of Asia and beyond. Visit his website here.

This ‘Moon Trail’ Was Shot with a 37-Minute Exposure