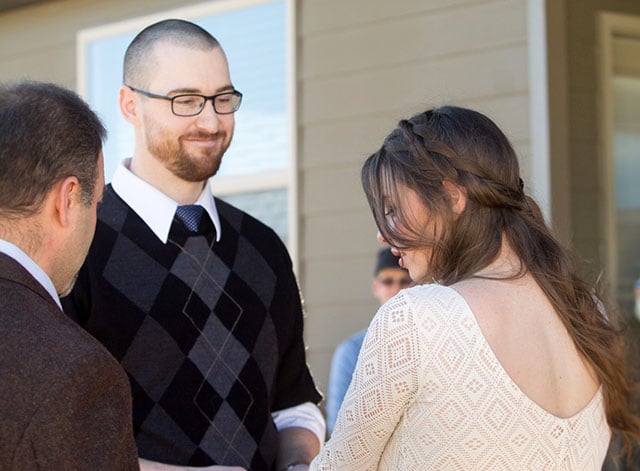 Yesterday was my wedding day.

It wasn’t a very big wedding. We’d actually been planning to get married in August, but after we found out I was pregnant (yay!), a very simple fact was staring us right in the face — I needed insurance. Now.

Plus, I’d be about 8 months pregnant in August, and call me crazy but I kind of want to be able to dance my butt off at our wedding, and 8 months pregnant does not qualify me for the kind of dancing I’ve been preparing for.

So instead, I put on a little white dress I had in the closet, Chris wore a button-down shirt and we headed over to his dad’s house for a “family BBQ”, where one of our family members, who was already ordained, married us in the backyard. The ceremony lasted maybe 6 minutes. I cried the entire time I read my vows, and then even harder when Chris read his. Another family member snapped some photos of the ceremony, and there was plenty of BBQ to go around. All in all, pretty much the perfect little backyard wedding. Except for one small thing…

We were both sick.

Chris woke up with the flu, and by 10:00 that morning he was having a rough time keeping anything down. I jokingly told him he might want to try taking the ring off to see if he felt better, but he was pretty devastated at the idea that he was ruining our only wedding day.

“I’m so sorry,” he kept saying. “I’ve been waiting for this day since I asked you to marry me. Just give me second, it’ll pass, I promise it’s nothing,” and then he’d make a mad dash to the bathroom. Poor guy.

I’m sure on some level he was worried that I thought he might be having doubts about this whole “rest of your life with one person thing”, but of course I wasn’t. We’d been together 7 years already. We both knew we were in it for the long haul.

Our ceremony was at 2:30pm, and by 5:30pm we were both headed home, desperately trying not to get sick in the car (him from the flu, and me from the morning sickness, which always hit me in the early evening). We got to the house and we both crawled into bed, where we stayed for the rest of the night…not exactly the romantic escapade most people envision their wedding day to be.

A few days later, our relative gave me the card full of photos from our big day. Lots of smiling, happy photos. I love them, but in all honesty, there is a different photo I wish I had.

Rewind back to our wedding night, and there we were curled up in bed together, munching on Saltine crackers and reading baby books. I flipped through one and showed him a photo of what our 6-week-old baby currently looked like. “That looks like a velociraptor,” he said very matter-of-factly, and I agreed. Then he snuggled up closer, laid his head on my shoulder and said, “Read me more about our tiny dinosaur baby.”

That, right there, is the photo I wish I had. Both of us cuddled up in bed, sicker out of our minds, reading about the small alien growing in my belly. I so wish I had a photo of that moment.

It’s really made me think of all the other photos I wish I had in my lifetime. As photographers, we don’t usually take photos of bad or mediocre times in our lives. We take photos of happy, new experiences because we think that’s what we want to remember. Our life checkpoints. The time we went to the Grand Canyon, the time we turned 21, the time we ran a half-marathon.

Don’t get me wrong, these all make for an awesome scrapbook, but if we focus only on the happy snapshots, we miss out on everything in between. Times like when you’re just sitting on the porch hanging out with friends or when you’re curled up on the couch with the dog.

Even “bad” times, like when you got completely lost on a road trip and everyone was yelling directions at each other, or when you visited a sick family member in the hospital. In these moments, the experience may not seem all that interesting, or even like one you want to remember, but trust me, it is.

Our wedding story wasn’t some huge, blown out fantasy that every couple dreams about, but it was still ours. And even though it doesn’t sound romantic, it really was. If I could go back, I might be tempted to change the fact that we were both sick, but then I’d lose the memory of us both cuddled in the bed, reading baby books and gingerly eating Saltine crackers…and I wouldn’t give that up for the world. 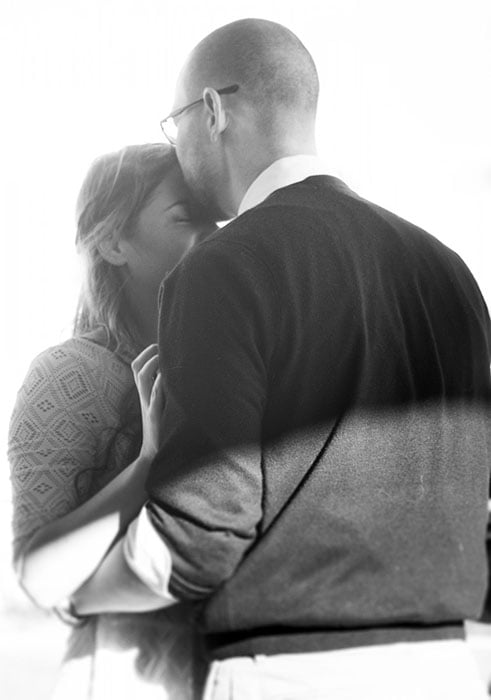 I do know that I’ll be making an effort to take better photos this year. And by “better” I mean redefine what I would normally consider to be a promising photo opportunity. Because if you knew this would be the last time you talked baseball with your Grandpa over a couple of beers, wouldn’t you want a photo of it?

About the author: Jenna Martin is a fine art and underwater photographer based out of Billings, Montana where she lives with her husband Chris and their small animal farm. After acquiring her Master’s in Psychiatric Rehabilitation, she made a drastic career change into the field of photography where she has been producing surreal images ever since.

Sony Sells Half Its Stake in Olympus for Cash, Now No Longer Largest Shareholder