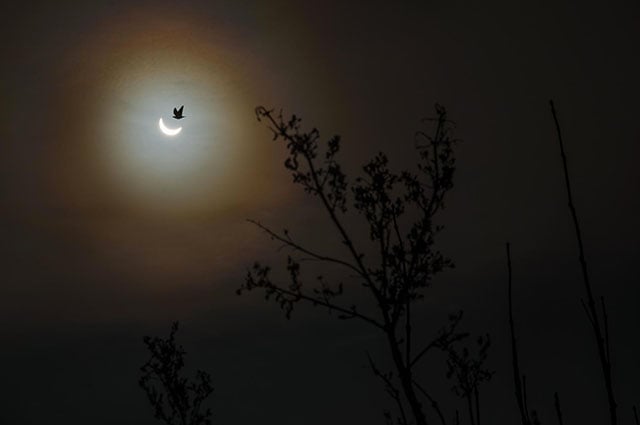 Beautiful photo compositions generally require a keen eye and a quick shutter finger, but sometimes luck plays a huge role as well. That’s what happened today for UK-based photographer Amy Shore, who was photographing the total solar eclipse from her backyard in Leicestershire. A bird flew into Shore’s frame as the Moon was passing over the face of the Sun, adding a unique touch to her shot.

“There’s not much to say other than that I was very lucky!” Shore tells us.

She was sitting in her garden at 9:20AM and snapping photos at ISO 50, f/16, and 1/4000s with her Nikon D600 and Sigma 85mm lens. It was still quite bright out, but Shore intentionally underexposed her shots to capture a clearer view of the eclipse (causing the photo to look like a nighttime shot of the moon). The eclipse was at about 85% when the bird decided to fly through Shore’s shot.

Here’s a closer crop of Shore’s photograph showing the details of the bird and the eclipse: You can find a larger version of the original shot here.

Image credits: Photographs by Amy Shore and used with permission

Enhance the Eyes in Wildlife Photos to Add Some Pop