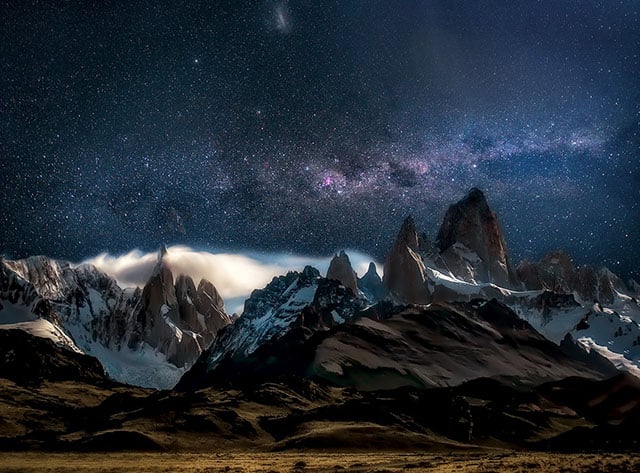 It is often said that “luck is what happens when preparation meets opportunity.” This photo may be a good example of that. It’s a single long-exposure photo of mountains in South America with the stars properly exposed in the background and the landscape in the foreground illuminated by the rising moon.

“I got a bit lucky with this shot,” photographer Greg Boratyn tells us. “I was mainly after the Milky Way but the moon showed up illuminating the mountains for a few good seconds.”

When he initially set up his equipment for the photograph, the moon was nowhere to be seen. It was only after he started shooting the 30 second exposure did the moon peek out from behind a mountain (off camera, to the right of the frame) and illuminate the foreground for just a few brief moments.

“The clouds in mountain tops made this shot a bit unusual I guess because normally, night shots don’t have clouds this white,” Boratyn says. “The whiteness comes from the Moon’s light as well.”

“I was shooting at high ISO so Moon’s additional light (which at first I thought will make this shot overexposed is some areas) made the image look otherworldly like. I didn’t intend this look but it seems it’s liked but a lot of people.”

In case you’re wondering, the mountains seen in the shot are Cerro Torre and Fitz Roy, found in the Southern Patagonian Ice Field of South America.

Image credits: Photographs by Greg Boratyn and used with permission