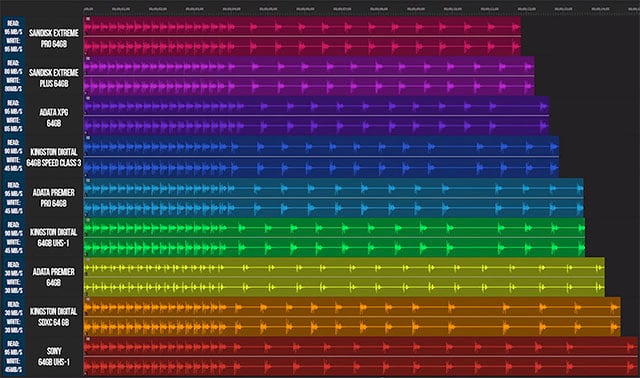 The popular YouTube tech channel LinusTechTips recently did an SD card showdown to see how the actual performance of the cards compares to what’s written on the labels. One of the things they did was a Canon 6D test, the results of which can be seen in the graphic above (here’s a larger version).


They shot 30 RAW photographs with the camera’s 4.5 frame per second burst mode. Using a microphone, they captured the time at which each shutter actuation occurred, plotting the visual representations of the recordings next to one another to great the visualization seen above.

The uniform bunches of shots seen in the beginning of each recording are the 18 RAW photos that are easily stored into the cameras buffer. Each subsequent shot is captured when a photo in the buffer is offloaded into the memory card. This allows us to see how quickly the cards can write the images files.

LinusTechTips was surprised that the Sony card came in the slowest in the test, even slower than a pair of ADATA and Kingston cards that supposedly had slower write speeds (30MB/s compared to 45MB/s). Sandisk cards were found to have the best performance, allowing the 30 frames to be captured in the shortest amount of time.

(via LinusTechTips via Resource Mag)