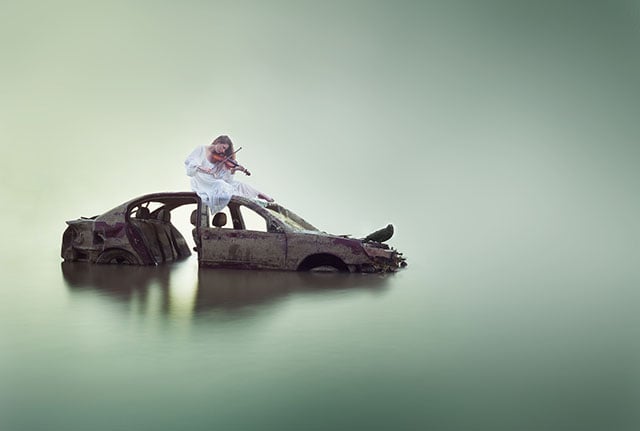 Here’s a quote from a recent article I read titled “‘Do What You Love’ Is Horrible Advice“: “It’s easy to confuse a hobby or interest for a profound passion that will result in career and business fulfillment. The reality is, that type of preexisting passion is rarely valuable.”

If you haven’t read that article go ahead and take a trip over there when you get a chance…or don’t if you’d rather not be fuming the rest of the day. The author is a great writer, with many other fantastic articles, but this one was just so wildly inaccurate.

I tried to just label it as one of those unfortunate things floating around on the Internet, but it was just gnawing at me. How many potential artists are out there now, squashing their dreams because they’re reading fear-mongering articles like this on the Web?

Well hopefully not a lot, but still, the thought of some teenage kid selling his guitar because too many people told him music was a “hobby” and not a career choice just kills me. He’s a teenager. Anything is a career choice.

Of course people are all entitled to their own opinions, right? Exactly, which is why I’m going to spout mine off right now. 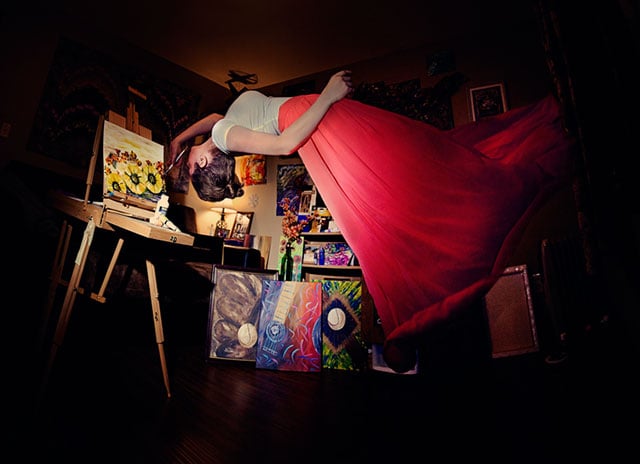 As we’re growing up, we’re told we can be anything. We’re told we can be astronauts, painters, unicorn tamers and anything else our little minds can dream up. A 5-year-old proudly proclaims they’re going to be a “rockstar,” and the adults laugh and smile and say, “My goodness honey, of course you are!”

Then somewhere down the line, we’re told to get real. We’re told to “get our heads out of the clouds” and start putting our efforts towards a feasible career. The idea of following our passion becomes a joke, and we’re told that art, in whatever capacity, is a hobby.

People list off countless things they themselves are “passionate” about but could never get paid for, and then recite a mountain of inaccurate, old wives-tale statistics:

“You know you have a greater chance of getting struck by lightning than you do of ‘making it’ as an actor, right?” 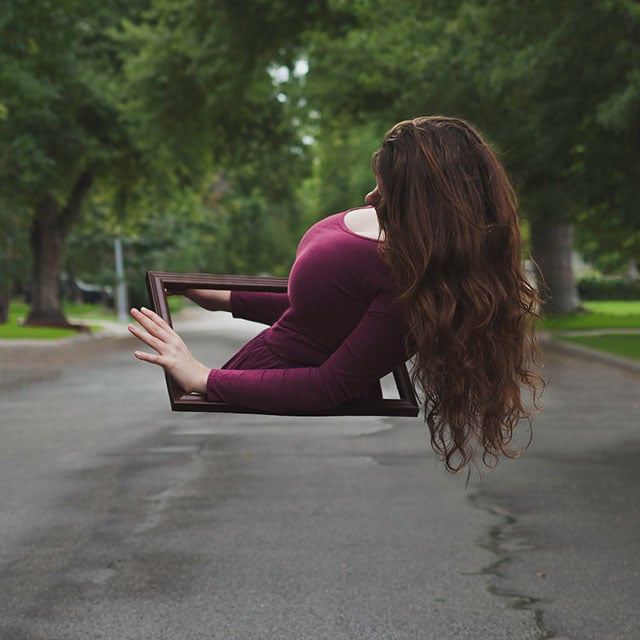 Now there are two arguments here: 1.) Passion alone doesn’t get you anywhere, and 2.) Where is the market? If there is no one to pay you for it, even if you are good, how can you make a living?

And for those points I have two responses: 1.) The concepts of talent and passion are widely misunderstood, and 2.) There is always a market.

Now this is the part where many people will say I have entirely overstepped my bounds and have finally reached the point where the advice I give new, emerging and struggling artists does them more harm than good. That in this era of realism, dreams serve the sole purpose of glittery fairy tales we tell our children until they reach puberty and then we shove a spatula and a job application in their hand while cynically smirking, “Life’s not fair, deal with it.”

Well, I reject that notion. Here’s why.

First, Talent and Passion Are Not What You Think

Talent is no more than a word people use to describe a person’s skill level when they haven’t been around to witness firsthand the process of developing that skill. Musicians, dancers, painters, all of them — did you see their work when they first started out? They were horrible. They hit wrong notes, had two left feet, and couldn’t have painted between the lines to save their lives.

They were absolutely terrible.

Because here’s the thing, while some people do naturally gravitate to a box of colored pencils instead of a calculator, the act of producing art itself is still a skill, and I cant stress this enough: skills can be learned.

In fact, many features we take for naturally occurring personality traits (i.e. willpower, creativity, focus) are actually skills; all of which can be further developed with deliberate practice.

Quick side-note: I promise I’m not just throwing out random “facts.” I would gladly link to peer-reviewed journals listing the relevant scientific data for all these claims, but it’s 3:30 in the morning and I just don’t want to. I will tell you though, that I have personally studied all of this, as I have a Master’s in Psychology, specializing in neurological processes and behavioral health. If you don’t believe me I encourage you to schedule an appointment with your local psychology professor. 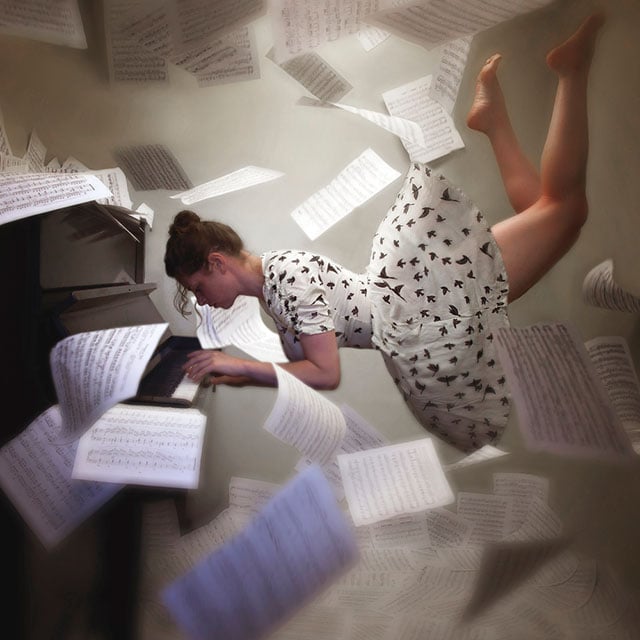 Okay, so what does passion have to do with anything?

The word “passion” is far overused in today’s common conversation. You hear people say, “I’m incredibly passionate about rock music,” when what they really mean is, “I, like, really, really like this one band I saw in concert last week.”

Passion is not just a love for something, it’s an obsession: an obsession capable of motivating people to practice a specific skill for a ridiculous amount of time. All those things that people list off to you as examples of things they are “passionate” about but could never get paid for – they’re probably right!

But those aren’t passions; they’re just stuff they like… as a hobby. And yes, if photography is your dream job but you dedicate the same amount of time to it as you would to any other hobby, you absolutely won’t be able to find anyone willing to pay you for it.

However, if you’re really passionate about photography, you’ll spend every waking second trying to improve. You’ll stay up late on YouTube researching various lighting setups and editing techniques. You’ll make your own gear when the real thing costs too much at that stage in your career and you’ll take classes and workshops to further your skills, and all that extra time really adds up.

To put it bluntly, passion can get you everywhere. It means you have the desire to put in a highly abnormal amount of work to excel at a particular skill; a skill that, when taken to a whole new level, is absolutely marketable.

So while you may be terrible right now, that’s okay — you already have the most important tool to producing amazing results. What you need now is practice and time.

Now on to my next point… 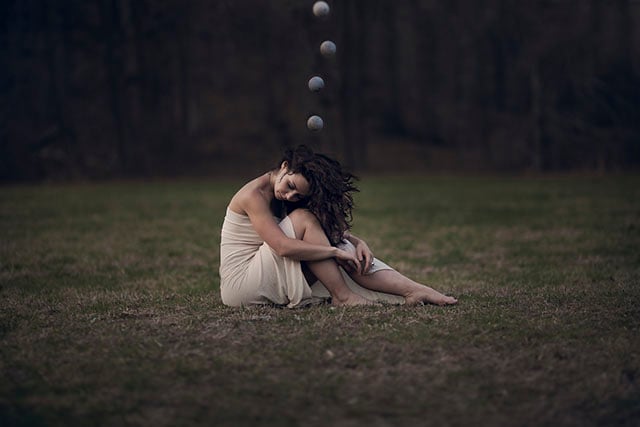 Second, There is ALWAYS a Market

The article above (along with countless others spanning the internet) lists one question as the one you should be asking when pursing your dream job: “Will people pay me for it?”

But that’s not the right question. Instead, what you should really be asking yourself is, “How can I prove to people my work is worth paying for?”

I’ll explain. Here’s a line I’m sure we’ve all heard many times: “Well maybe you should still get an accounting degree or something. You know… just in case.”

Ah, yes. If I had a nickel for every time I’ve heard someone give me “just in case” advice to prepare myself for inevitable failure… well let’s just say I’d own an impressive collection of jet skis by now.

See, you never hear people tell accountants to get another degree, “just in case.” No one ever tells med school students that maybe they should learn welding, or construction, or some other trade skill so when this whole “being a doctor” phase wears off they’ll at least have something to “fall back on”.

The fact is, people only pay for things they either want or need, and when your passion falls into a field that meets an obvious market need, following it is completely acceptable. People need doctors. People need accountants. Supply and demand; it makes perfect sense.

Art, on the other hand… Art is seen as a “want”, which means that people have a harder time understanding the market for it unless they themselves are a part of that specific target audience. Someone that would never consider buying a piece of art for $1,000 will have a very hard time reasoning how anyone else could possibly make a living selling art for $1,000.

But there surely can’t be a market for everything…

Yeah, actually, there pretty much always is. You can make money doing virtually anything nowadays, provided you market it correctly. Ever heard of the NYC Naked Cowboy? He plays a guitar and sings songs in his underwear and a cowboy hat. And now he’s sponsored by Fruit of the Loom and has a net worth of over 2.5 million dollars. 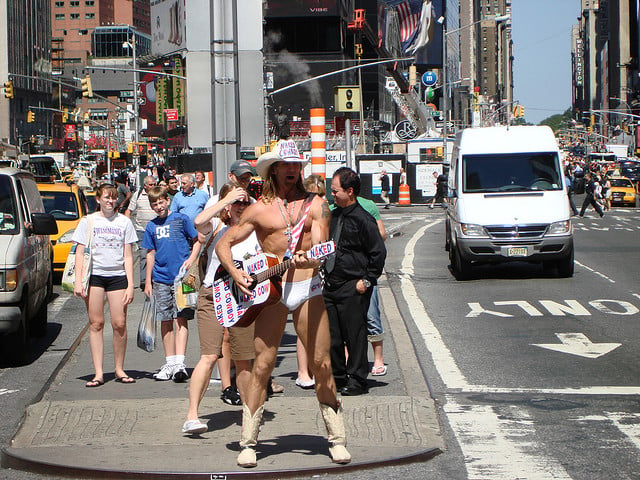 Take that, guidance counselors of the world.

The point is, whether the market exists or not isn’t the problem – it’s real and it’s there. Reaching it is the issue. So develop a strategy – figure out what you have to offer and how you’re going to get it out there.

Who is your target audience? What value are you offering them? How do you explain to them that what your selling is going to benefit their lives in some measurable way?

I’m not saying that you can quit your day job, buy an art kit, take a modern watercolor class and begin a successful painting career next week — I’m saying that creating a career out of something you’re genuinely passionate about is a very, very real possibility, and contrary to popular opinion you’re not doomed to a life of waiting tables while you try and make something out of those “doodles” you’re always working on.

Put in the effort to hone your skills and create a comprehensive marketing strategy to sell the application of those skills. That is how you begin a successful career of doing what you love.

About the author: Jenna is a fine art and underwater photographer based out of Billings, Montana. After acquiring her Master’s in Psychiatric Rehabilitation, she made a drastic career change into the field of photography where she has been producing surreal images for the past 2 years.

A First Glimpse of the Upcoming Panasonic GF7