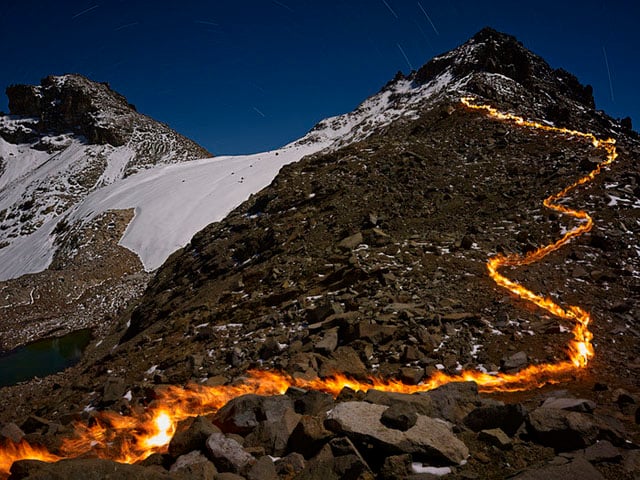 For his project “When I Am Laid in Earth,” photographer Simon Norfolk traveled to Mount Kenya to photograph the melting away of the Lewis Glacier, the largest glacier on Africa’s second tallest mountain. To capture what once was compared to what exists today, Norfolk used gasoline to create lines of fire that mark where the glacier lines once stood.

The photograph above shows where the Lewis Glacier ended in 1934.

The flame line shows the Lewis Glacier’s location in 1934. The glacier has since receded about 275m. In 1934 it carried on almost to the top of the peak on the right and covered the left side of the picture as high as the break in the scree slope, just below the vertical ‘wall’ that leads to the summit.

Here’s a behind-the-scenes video in which Norfolk discusses the project:

Norfolk determined the exact placements of the lines by referencing old maps and modern GPS surveys. “The gap between the fire and the ice represents the relentless melting,” he says.

The land is no stranger to the mixing of fire and ice. Mount Kenya is actually “the eroded stump” of a long-dead mega-volcano.

To think that in ten or twelve years this magnificent glacier that has endured for millennia will exist only in photographs, is unbearable. The feeling I have for the losing of the Lewis can only be called ‘grief.’

So, see it now before it’s gone: get over there quick before Mount Kenya is just an unadorned rocky stump, robbed of it’s innocent, frozen crown. Unless of course you feel that flying around the world injecting tonnes of hot CO2 into the troposphere in order to witness the melting of Africa’s glaciers, is just a little too ironic.

You can read more of what Norfolk has to say about this series over at Institute.

Image credits: Photographs by Simon Norfolk and used with permission

Did Canon Leak a Glimpse of an Upcoming DSLR with this Connect Station Photo?