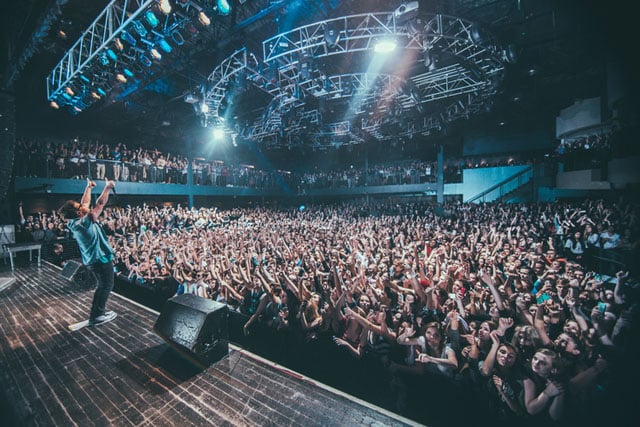 My workflow is the most important part of being a productive and successful music photographer. Other photographers rarely ask about it, but I feel like it’s something a lot of people don’t think about until they’re on the road and freaking out because their workflow sucks. So I’d like to share mine with all of you.

I work really hard to impress each artist I work for with my workflow and turnaround every day on the road. Editing on tour can be really difficult because you don’t always have power for your laptop, no Internet to upload things, run out of space on your hard drive, and an endless list of other frustrating obstacles.

It’s never an ideal situation, so whenever there’s a green room with a desk, working Wi-Fi, and a pot of coffee, I’m a very happy and productive man.

Why is a Fast and Efficient Workflow Important?

As a tour photographer, I’m always taking pictures – not just while the artist is on stage playing their songs. That’s like 1 hour of the artist’s 24 hour day, so it should be 1/24th of my job. Actually I take that back – don’t shoot your artist while they are asleep, because that is creepy. So it’s like 1/12th of my job or so.

The point is, I should always be shooting, and when I’m not shooting, I’m editing. There is no “hey guys don’t do anything interesting and let the photographer edit” time so I have to find pockets of time when I can. When interesting or funny things happen, as the photographer it’s my job to be there and capture that. Many of the best moments happen offstage.

When I first started touring, my workflow sucked and in turn I had to spend a lot more time editing and processing pictures. I was usually the first one up and the last one asleep. It honestly became so much less fun as the days went on and I was so exhausted. Not to mention I was missing crucial moments, or not delivering the number or quality of images I wanted to. After a few runs, I managed to fix my system so I’m only waking up early and editing quickly before we get to the venue. If your workflow sucks on tour, your life sucks on tour.

I’m of the belief that each person in the band and crew should have pictures delivered to them each day. This may seem like overkill and a lot of extra work, but the people you are on the road with are your friends. If they’re not your friends, they will become your friends when you have photos of them for their Instagram accounts in a Dropbox folder every morning when they wake up. Most every crew member I’ve ever been on tour with has been astonished that I take pictures of them and they really appreciate it.

What You Need for a Great Workflow

There are a few things that make or break my workflow. This is a short list of things as a tour photographer I would NEVER skimp out on.

Before each tour starts, I give myself some homework. I create a folder system for each date of the tour. Here is how that looks: 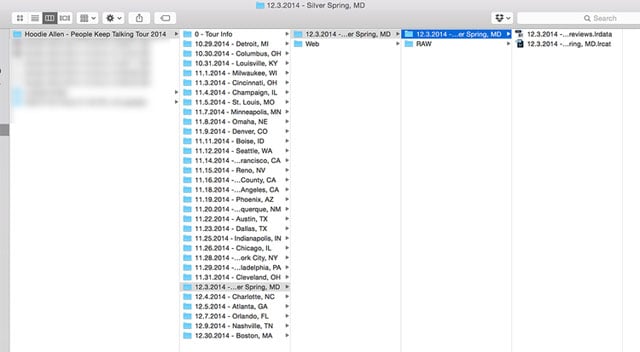 A folder for each date. Each day, I create a new Lightroom catalog 2 folders deep in order to keep the show’s folder very clean and organized. I also import the raw images into a subfolder 2 deep as well. Exported images are in the “Web” folder, but that comes into play later.

I replicate this folder system on 2 hard drives. I use 2 drives to back up my work every day or two. I keep the drives in separate locations in case one gets stolen. After my internal hard drive starts getting close to full, I will delete the files from it, and still have the two copies on separate hard drives.

Do not be lazy about backing your work up because if you don’t do it, your computer will light on fire and you will lose everything and this is not a scare tactic, it’s gonna happen. So back your stuff up.

The next thing I do is create a similar file tree in Dropbox, which is selective synced to my computer. Everything I put in these folders on my computer uploads automatically in the background, which is amazing.

I also create a folder called ‘Galleries’ which just includes every image from that day – I share this link with management, publicist, etc. as well as the artist and any band or crew that may be interested. 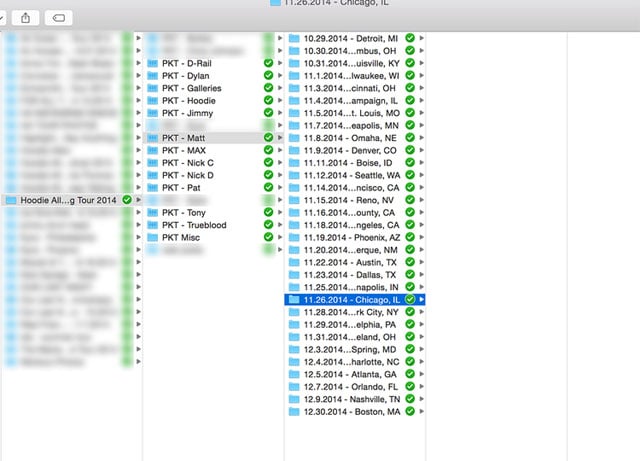 Day 1 is crucial to your workflow. The first thing I do after the show is import photos and spend some serious time in Lightroom.

In the image below, you can see my presets on the left side. Day 1 of every tour, I go through behind the scenes images and live images and create variations of my own presets. After the first day, I know what the lighting will be like for the live show, which dictates how I edit. Create a preset folder in Lightroom and do this, it will save you a lot of time. 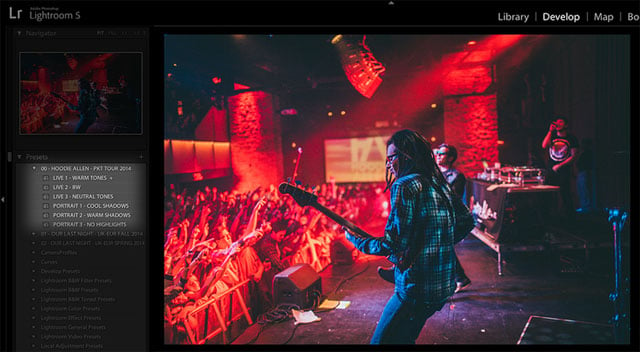 After you have your presets, head to the import dialogue and set up your “Apply During Import” settings to your generic live preset, and setup your Metadata. This saves so much time later as well. Now on day 2 when I go through the rough 1,000 shots I took during the day, all I have to do for the live ones is adjust exposure and minor details on the sliders. This keeps a consistent look across all photos and makes my workflow much faster.

After shooting all day, I usually import the photos immediately after the show so that I don’t misplace a card, accidentally overwrite it, and basically just avoid any sort of data loss incident that could occur.

I won’t go through the actual editing of the photos, but the basic premise is I cruise through my Lightroom catalog, using the hotkey “B” to make a quick collection of the keepers, while I edit as you go. I usually have a quick collection of 150-300 images. I export them, resizing for web, into my folder “Web” in each date’s subfolder.

From this huge list of photos, I go through each one and copy and paste the photos of that person into their daily Dropbox folder. I rarely edit the night of the show, and instead try to get to bed fairly early and wake up early the next morning to do my complete editing process before the bus gets to the next venue. I try to get in the venue as fast as I can and get on Wi-Fi so that my selective sync Dropbox folders update and the guys wake up to a notification that there are new photos in their Dropbox folders.

All of this stuff is pretty basic but has changed my life on tour and saved me countless hours by putting in an extra few of prep time before the tour starts and on the first few days. My entire workflow including importing and exporting is roughly 1 hour and 15 minutes for each show.

Photos on tour are very time sensitive – in extreme cases some artists like my friend Hoodie Allen like to post a crowd photo minutes following the show, so I import, edit that very quickly, and text it via iMessage to him right away. The whole process takes under 5 minutes, but really helps engage kids on their way home from the show reflect on how awesome it was. Things like Wi-Fi on cameras are also becoming part of my workflow. For example, I was just with Hoodie Allen when he played a TV show. I took a photo of Hoodie and the show’s host on my 6D, connected via Wi-Fi to my phone, edited in the VSCOcam app, and sent Hoodie the high res image for his social media within minutes. That type of shortcut in my workflow is rarely used, but amazing in the right situations. When my artist asks “How the hell did you do that so fast?” I know that my system is working.

I’m always learning new things to implement into my workflow and how to improve it and make my life easier. My personal goal as a music photographer is to provide the artists I work for an insane amount of content, and to make that content amazing. The faster I churn out the content, the more time I can spend focusing on making sure it’s amazing!

About the author: Matty Vogel is a music photographer based out of Philadelphia, Pennsylvania. You can find out more about him and his work through his website and his blog. This article originally appeared here.

Photographers: Be Careful Not to Tag the Wrong Santa Claus in Your Facebook Photos