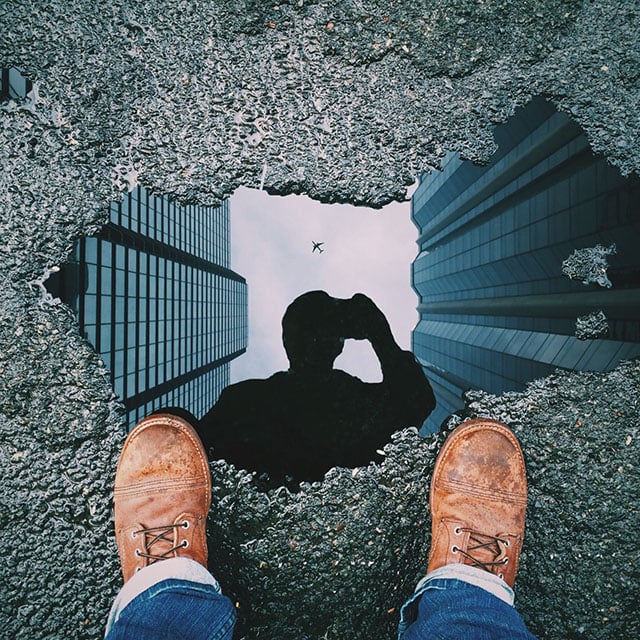 My name is Michael Pistono, and I’m a 28-year-old photo enthusiast living in Honolulu, Hawaii. I was recently playing around with a reflection photo when I had the idea of creating another one out of a puddle — one that featured both tall buildings and an airplane.

The photo I ended up creating in Photoshop (shown above) went viral online. Here’s a look at how it was made.

I first used a picture of myself standing over a puddle as my base layer. I started off using my iPhone 5s and an app called ProCamera (which allows for much larger/high quality image files) to take this: 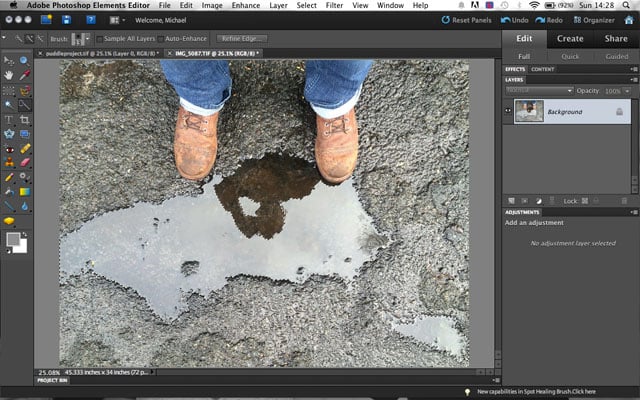 The first big step was to create a layer from the background image and cut away the empty space in the puddle that was going to be used for the “reflection.” I made a few smaller selections here and there to get the smaller rocks poking up through the surface to add back in later at this point too. It ended up looking something like this: 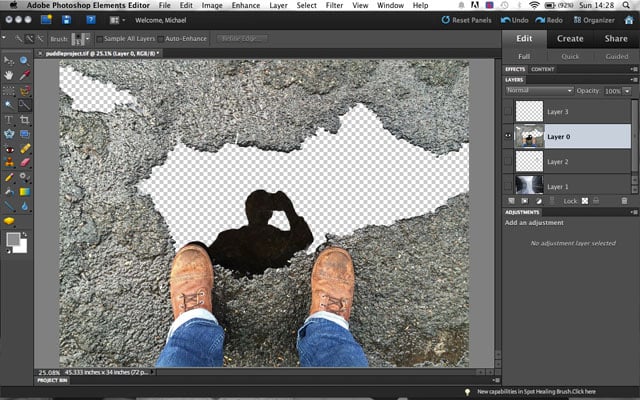 Next, I used another image that I took on Bishop St. in downtown Honolulu to fill in the cut out space in the asphalt layer.

I pasted it in, rotated and made sure that the buildings aligned with the vertical axis of the image, added some surface blur, and altered the highlights a bit before I sent it backward in the layer arrangment. I also had to drag the layer to ensure that the vanishing point in the buildings image was aligned perfectly with the lens in the reflection to get the “realism” I was going for. 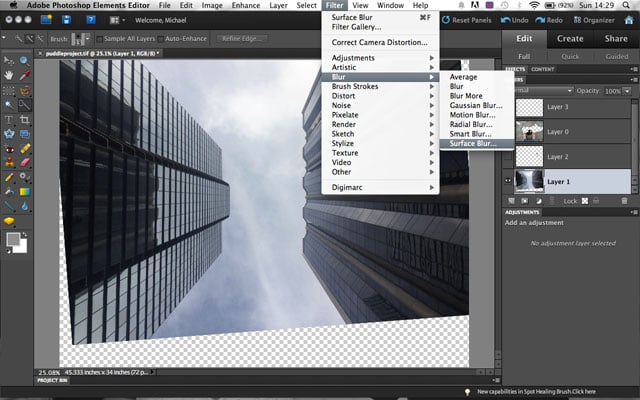 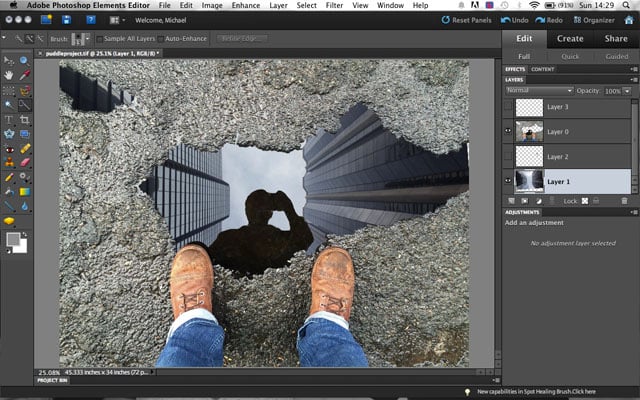 The next step was to add in the smaller objects in the puddle such as the rocks and the airplane. 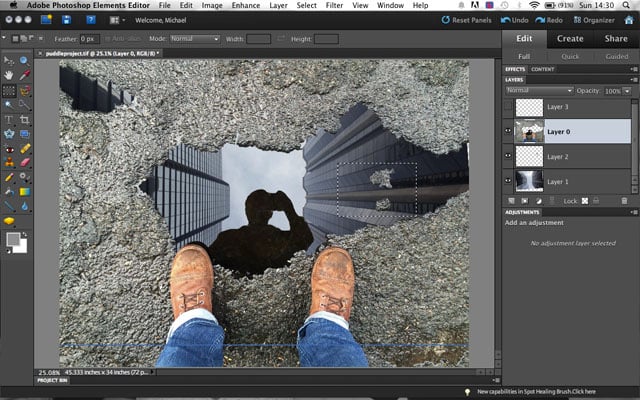 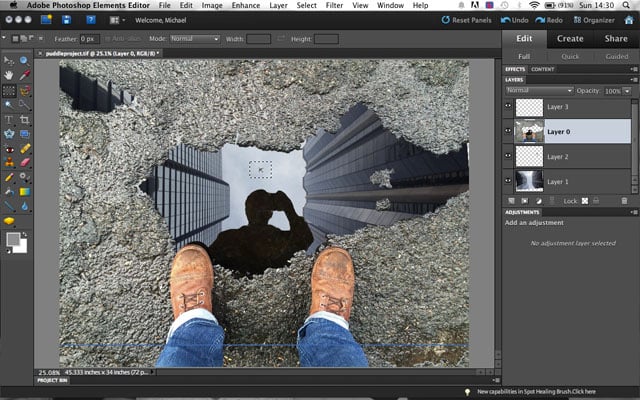 I dragged each layer until I was happy with the positioning and adjusted their levels of lighting/highlights/shadows/midtones according to their relation to the first layer.

Next, I wanted to darken the street level image to give the impression that the camera was metering for the sky in the reflection, so I brought up the ‘levels’ adjustments and fooled around until I was happy with what I saw. 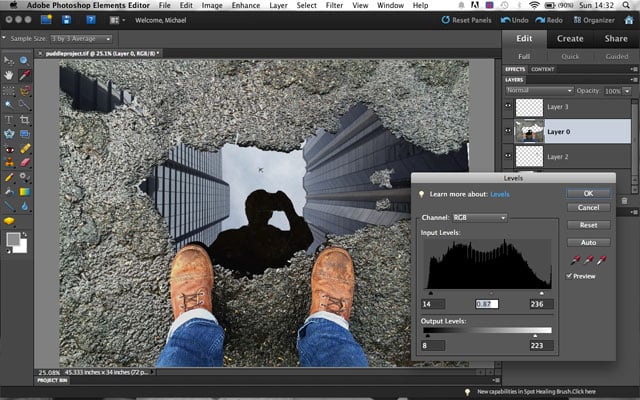 Some of the edges around the reflection themself were too sharp, so I used the eraser tool set to 75% opacity to smooth out the edges and then the blur tool to blend the edges back in. I also darkened the selection to add to the “exposure metered for the sky” thing I had mentioned before. 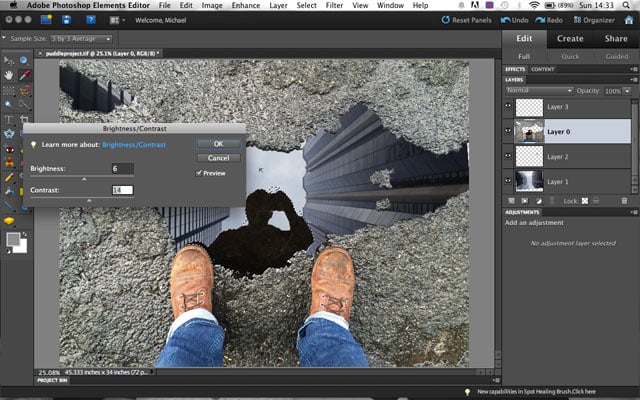 Then, I added a little vignette to draw attention to the center of the image and flatted out all of the layers. 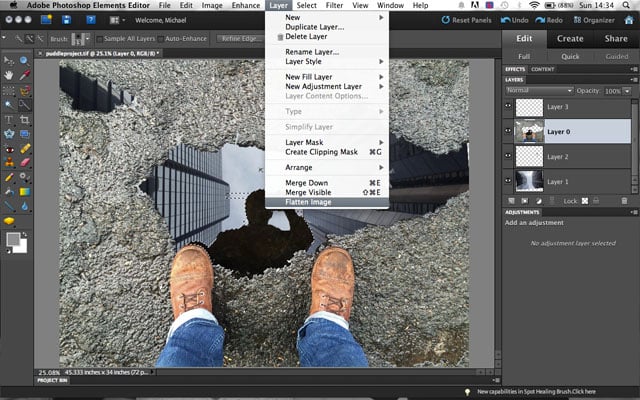 I added a gradient map adjustment layer to give a blueish tint to the image. I set the opacity of the layer fairly low so that it didn’t overpower the image and messed with the color scheme until I saw the bluish tint that I wanted. 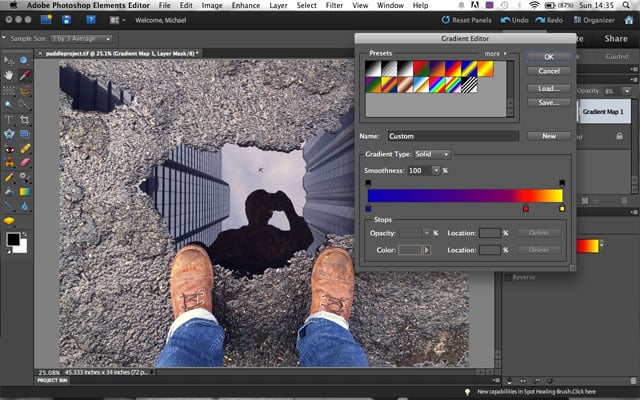 Lastly, I cropped the image into a square so that I could post it to Instagram and saved it as a JPG to share elsewhere (here’s a larger version).

After sharing the image on Reddit, it hit the front page and quickly received millions of views.

My wife has since set up an Etsy shop in case anyone is interested in buying a print of this image.

About the author: Michael Pistonoa is a 28-year-old photo enthusiast based out of Honolulu, Hawaii. You can find more of his work on Instagram and Tumblr.